An empire is at its most dangerous when it’s failing. With less and less to lose, it continues to try to do the impossible by doubling down on past mistakes.

But history tells us that empires fall from within. If so, technically, how does a modern empire meet its inevitable fate?

In Charlie Robinson’s latest book, co-authored with Jeff Berwick, entitled The Controlled Demolition of the American Empire, the writer outlines the possible consequences resulting from a political and economic system in crisis.

Robinson uses the analogy of building demolitions to describe what he envisages as the impending collapse of the American empire. In order to take a structure down, support columns are identified, detonators rigged, alarms activated and, finally, plungers are pushed. 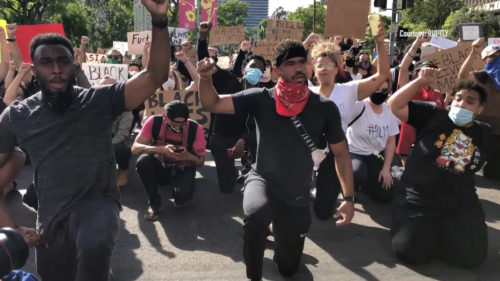 “What we’re experiencing right now in the United States is that the end of the American empire is here. It’s not even so much a debate about whether or not this system is coming down because the pieces have been put into place to take this whole system down”, says Robinson.

The author suggests that there is unlikely to be an all-encompassing conspiratorial hand intentionally guiding the process. Rather, Robinson argues it’s the neoliberal economic structure within the system and those responsible for implementing policies that give rise to it, that are the key destabilizing factors.

Having reached it’s apex, Robinson argues that the system currently has nothing else to do but collapse upon itself. “What we’re trying to do in the book is look back at what decisions were made, who made them and what the plan is moving forward”, says Robinson.

Central to this is ruling class malfeasance and the undermining of democracy that it implies, embodied by a revolving door that seamlessly links the powerful lobbying interests of corporations to the political corridors in Washington.

The author cites the revolving door between the medical industry, wider corporate interests and their ties to the political establishment, as an example of how this system of crony capitalism works:

“You have CDC head, Julie Gerberding, who is overseeing the CDC vaccine programme and then immediately makes decisions that benefit Merck, a company that she subsequently takes a five million dollar a year job running”, says Robinson.

“Whether it’s somebody doing this in Big Pharma or whether it’s Eric Holder being the attorney general under Obama and then rotating back into Covington as a reward for not prosecuting the big banks, the corruption goes to the core of what is destroying, but not limited to, the United States.”

Robinson agrees with Pulitzer prize winning journalist, Chris Hedges’ description of America’s descent as horrifying. To a large extent this is a notion predicated on the fact that many oil-rich nations are currently pegged to the US dollar – an unsustainable position in the context of a rapidly changing world that’s shifting away from the view of America as one of exceptionalism.

America has to put everything in a military context in order to start wars. “Our arrogance will be our undoing”, says Robinson. The author attributes the systemic controlled demolition of the US empire to globalisation indicative of the breakdown of supply chains.

In the quest for cheap labour, the US began to export all of its industries to China. Over the course of the last few decades this has, domestically, enacted a terrible social, economic and political price.

The metaphorical support columns identified by Robinson that have been attacked, weakened and broken down are also embodied in other ways. The destruction of the US education system is one example. This has been achieved as a result of the introduction of Common Core into the curriculum by Bill Gates, the purpose of which is to prepare kids to excel in the tech industry. Robinson describes this as “a disaster – an educational time-bomb.”

Another illustration of the blowing out of support columns, related to Common Core, has been the establishments attack on critical thinking and their destruction of peace and truth.

Following the weakening of the support columns, Robinson explains that the entire edifice will be brought down as a result of the debasement of the currency through endless wars and as a consequence of the division of the public into competing tribes.

The ‘alarm bells’ analogy identified by Robinson at the outset of this piece, relates to unsustainable aspects of society that emerge in everyday life such as huge wealth disparities and the ongoing war on whistle blowers like Julian Assange and Chelsea Manning.

The ‘pushing down the plunger’ aspect Robinson refers to is a collective and structurally determining factor that combines propaganda messaging, state oppression and the chasing of invisible enemies.

Arguably, the media and political establishments reaction to the corona virus represents the current manifestation of the latter.

The positive aspect likely to emerge from the chaos – or ‘creative destruction’ to use Schumpeter’s term – is the possibility for new opportunities to arise from the debris of what Robinson likens to an unstoppable tsunami. “Do what you can. Save yourself. Save your friends. Save your families. Get to higher ground and start to plan accordingly”, is Robinson’s timely advice.