While Special Counsel Robert Mueller charges ahead with indictments for alleged Russian election interference despite a complete lack of evidence, Defense Secretary, Jim Mattis and Secretary of State, Rex Tillerson call for the Senate to authorise permanent war funding with no time or geographic limits. Welcome back to the Cold War, 2.0. 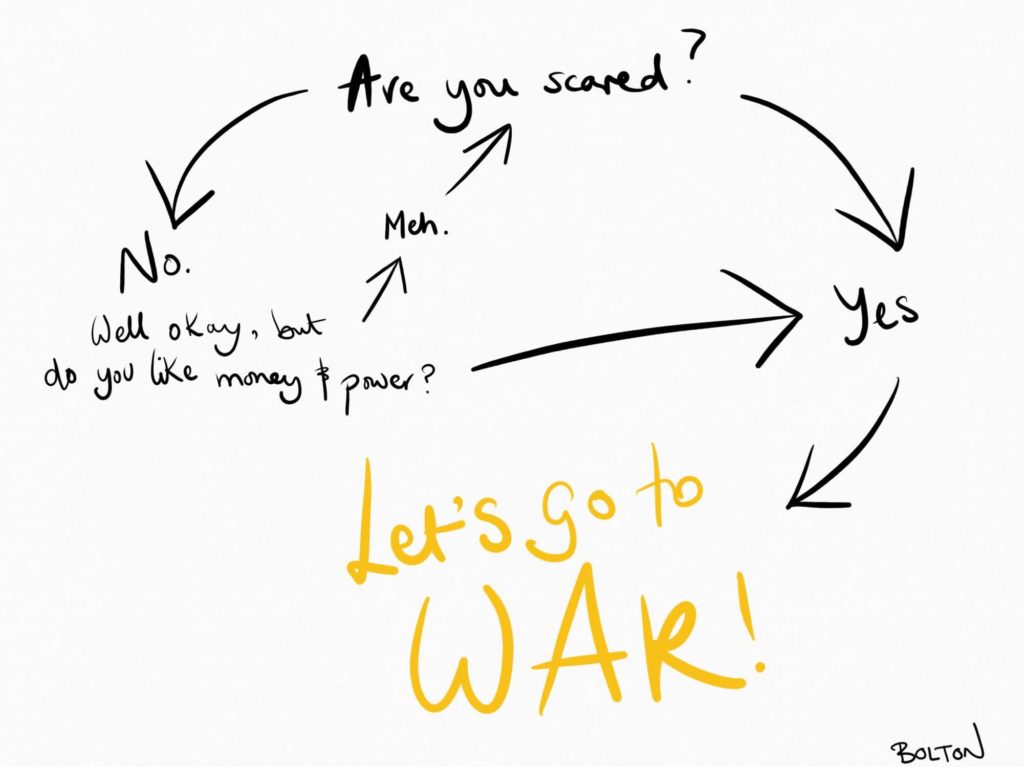 Russiagaters, who judging by the tweets I saw all weekend were certain Trump would be in handcuffs today, are making a strained effort to appear vindicated after the notoriously corrupt Paul Manafort and two guys they’d never heard of found themselves in legal hot water while a Podesta brother resigned instead. They remind me of a guy who keeps trying to make sex happen long after losing his erection. It’s okay, McResistance, it happens to every guy. Let’s just order Chinese and watch Simpsons reruns and pretend we’re not both struggling with feelings of inadequacy.

Meanwhile, this is happening:

Hardly anybody is talking about it, but Secretary of State Rex Tillerson and Defense Secretary James Mattis both appeared on the Senate floor today to explain to legislators why it’s essential that the current administration’s war powers not be subjected to any limitations of space or time. I’ve got no problem with people paying attention to government corruption, and I can’t blame Democrats for hoping that the charges against Manafort, Gates and Papadopoulos will somehow lead to Trump’s impeachment (they won’t), but it seems pretty ridiculous to claim that someone shouldn’t be president while simultaneously granting him authority to wage endless, limitless acts of war.

Isn’t it funny how the purportedly anti-corruption, pro-social justice “Resistance” just so happens to always fall completely in line with the interests of the CIA and the military-industrial complex? For all their rainbow flag waving and Black Lives Matter supporting, for all their talk of speaking truth to power and sticking up for the little guy, what they end up actually doing is helping America’s unelected power establishment manufacture support for a new cold war with Russia, helping to censor anti-establishment voices on the internet, and propping up the agendas of the US war machine.

Two of the highest officials in the Trump administration appeared in the highest legislative body in the US government to argue in favour of what is arguably the most impactful single legislative measure still governing US foreign policy today, and I have readers telling me they’re struggling to find any reporting on it whatsoever. There’s more commentary than anyone could ever possibly read on the charges against three low-level Republicans which will have functionally zero impact on US affairs, but whether or not the president they claim is simultaneously (A) crazy, (B) dangerously incompetent, (C) a secret Nazi, and (D) a traitor should have limitless war powers authorisation is going completely undebated.

The Manafort indictment does not allege what a lot of people seem to want it to regarding Trump and the election.

Manafort/Gates indictment – to be clear “conspiracy against the US” is standard language for such federal crimes pic.twitter.com/Olq6wEXdYh

SO many people misunderstanding this or distorting it https://t.co/JzAeWAAfXo

Doesn’t show that. It shows P claims a “professor” who DOJ says has “substantial” RU ties told him Kremlin has “thousands of emails” on HRC https://t.co/NDyuI4fD0i

How funny that Tillerson, himself a frequent Russiagate target, is being ignored now that he’s saying the war on terror shouldn’t be constrained by geographical boundaries or time (or the Constitution, or facts, or rationality, or international law, or ethics, or morality, or cost, or measure of effectiveness, or human empathy for that matter). Former Green Party vice presidential candidate Ajamu Baraka said it best:

“Opposition to Trump has been framed in ways that supports the agenda of the Democratic Party — but not the anti-war agenda. Therefore, anti-Trumpism does not include a position against war and U.S. imperialism.”

Anti-Trumpism is not revolutionary. It’s not even anti-establishment in any way that matters. America is like a big stadium full of fans screaming in support of their favourite pro wrestler like their lives depend on it, not realising that the whole thing’s fake and the costumes are for show and they’re just buying Vince McMahon another private jet.

Their fear is real, though. These people were told every day since 2015 that Trump is the next Hitler and for the last year that he’s the puppet of an evil foreign dictator as well, and now the Trump derangement syndrome that they have been psychologically brutalised into has them transfixed like a bullfrog under a flashlight. They can be led to promote any agenda no matter how psychotic and ignore any warmongering behaviour no matter how dangerous, because all they care about is the fairy tale they’ve been fed that they can get rid of Trump by screaming about him enough.

A Russiagater on my Medium piece just seriously used the phrase "extricate un-American elements from our politics".https://t.co/IhKRFptpKH pic.twitter.com/TVbTnKbCB7

In the comments of my recent article a reader used the words “extricate un-American elements from our politics” when describing her campaign to remove Trump via Russiagate, and it seriously freaked me out. The McCarthyist/HUAC language isn’t even being held back anymore, and people have stopped thinking. I don’t know how many Americans are that far gone, but it’s too damn many. It’s bad enough for comments which should be incendiary to come straight from the mouths of elite Trump administration officials and go completely unnoticed anyway.

Endless, limitless war is less concerning to these people than the money laundering sleaziness of some low-level Republican many years ago. That’s a problem.

Rogue journalist, poet, and utopia prepper. You will disagree with me sometimes. And that's ok.