The response to the Italian elections in March showed us that European institutions, read Germany’s Fourth Reich, shall be Italy’s rulers, not the regular voters.

The Italians have endured over 16 years of zero economic growth and youth unemployment around 27% or more, without much hope in sight. Their debt is US$4 trillion dollars and growing – an amount that they will never be able to repay.

For clarity, allow me to repeat: Italy cannot and will not ever repay it’s $4 Trillion in debt. 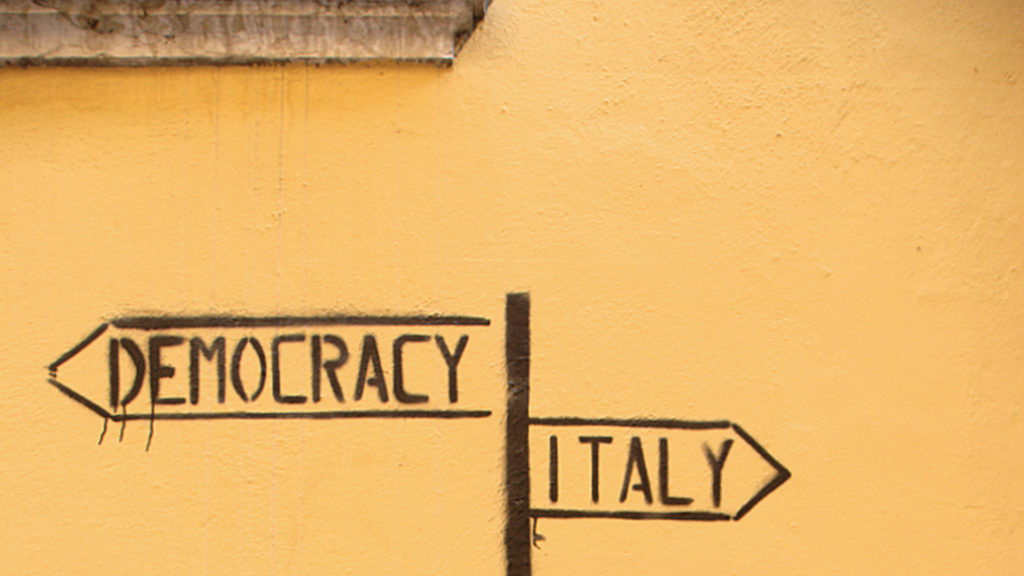 In fact, Italy’s underlying economic and employment problems are the same now as they were 18 years ago – too much debt and not being economically competitive with Germany.

The Italians have finally had enough and are demanding change. As a result, the March election showed big gains by populist and anti-establishment parties as well as the worst showing by pro-establishment liberal candidates in the party’s history.

The anti-establishment Five Star Movement (M5S) and the right-wing Lega (or League) party were widely considered to be the main victors. M5S gained an unprecedented 33 percent of the vote and the center-right coalition, which included Lega, won 37 percent. In fact, Lega won 18 percent of the vote – the most votes of any other party within its coalition. Both parties claimed a major victory after the elections, but these results leave Italy with a hung parliament and the need for a coalition government.

To the chagrin of the EU overlords, both parties are Eurosceptic – that is, they want to move away from the European Union. Both M5S and Lega have called for rewriting treaties with Europe to give Italy more sovereignty and control over their economy, allowing Italy to grow and prosper rather than atrophy and stagnate in debt servitude to Germany.

M5S wants to, contrary to EU rules, impose a 15% flat tax, repudiate most of Italy’s trillions in debt – a massive debt that has suffocated the country and led to a record 132.6% debt to GDP ratio – and dump the failed single currency Euro. The party wants to clean up Italy’s dysfunctional and corrupt political system as well as introduce a universal basic income.

With the goal of increasing employment rates, Lega has promised to tighten immigration and work towards improving economic growth.

But the EU’s rulers in Brussels are not happy. Comments made by European Budget Commissioner, German Guenther Oettinger to Deutsche Welle best summarizes the view of Italy’s overlords towards the election results. Oettinger stated, “The negative development of the markets will lead Italians not to vote much longer for the populists.” In other words, we will punish and steamroll you, just like we did to the plebeians we rule in Greece. You best immediately become servile and obedient.

In response to the EU’s disappointment, Italy’s president, Sergio Mattarella, quickly fell in line with his masters in Brussels. Acting on orders from the EU, Mattarella arbitrarily rejected the formation of a democratically-elected parliament between the Five Star Movement and the League. Remarkably, upon violating Italy’s constitution, Mattarella appointed Carlo Cottarelli, an ex-IMF EU loyalist, as prime minister for the duration of 2018—unilaterally disregarding the will of the Italian voters.

The message to the Italians is startlingly clear: Italian voters are not allowed to vote against the EU. Your vote will only count if the mindless, tone-deaf, non-elected rulers in Brussels agree with the outcome.

The message to the rest of the world is also extremely clear: There is no democracy in the EU. Democracy is dead.

Unfortunately for the EU and Emperor Mattarella, things don’t seem to be going to plan. Apparently, Cottarelli has failed to garner Parliamentary support to setup a government. He was unable to present Mattarella with a list of EU-friendly ministers that could be used to form the government. If these parties are unable to compromise and form a government new elections must be held within 70 days.

Just like Merkel toppled Berlusconi, Emperor Mattarella has rejected another democratically formed coalition pouring petrol on the burning fire of Italian anger which is likely result in Italy’s next vote being a “proxy referendum” on EU membership—the results of which will likely be a landslide victory in favor of Italy’s EU exit.  #ITEXIT.

However, the rulers in Brussels will NEVER allow another EU referendum so Italy may need to be schooled in UK Prime Minister Theresa May’s dystopian world of media bans, snooper’s charters, and secret trials without representation.

Italy’s voters are tired of being ruled by Germany and lied to by politicians who pander to the EU’s bureaucracy in Brussels.

The EU strategy – read GERMANY’s dictate – to hold profligate Southern European countries accountable for odious debt incurred during the last credit crisis will never succeed and will lead to the EU’s failure.

The EU banks which made irresponsible lending decisions should not have received taxpayer-backed bailouts. They should have gone bankrupt. That’s called capitalism. Crony capitalism, A.K.A. unlimited bank bailouts, has destroyed the economies of Southern Europe and future generations of growth. The only solution is default.

The Italian results and the subsequent actions by Emperor Mattarella support what many have been saying for years – the EU is terminally flawed and on life support with endless bailouts from the European Central Bank and is ultimately destined to fail.

Mitch Feierstein is a British-American investor, banker and writer. He has worked as a columnist for the Daily Mail and currently works as a columnist for The Independent and the Huffington Post. Feierstein appears regularly as a financial commentator on SKY, BBC, and RT. In 2012 he published his first book, Planet Ponzi, which gives his perspective of the global credit crisis.

Getting to know Mitch Feierstein:

- How do you spend your days?

In addition to acting as an advisor to several family offices I am a Managing Director at Storia Inc. a multi-media platform created to change the paradigm in digital content creation, delivery and consumption. Storia will leverage the generational shift away from traditional media to 'mobile and video first'.

-What in your answer to Q1 is especially important to you and why?

It is important to make an impact that can positively influence change.

The west has lost its way, capitalism and free markets have been bulldozed by the interests of .001% of the USA’s gargantuan Military Industrial Complex. Add in a dash of 'narrative designed to move forward specific political agendas', a controlled media, owned by six mega corporations and a cabal of reckless misguided academic central bankers - you have the perfect recipe for either:

1) The worst global economic depression in history, or

2) Civil war, as the left’s political repression of speech, thought and conduct has become 'nazism of the left,' which will end badly, or

- What drove you to focus on finance & investment? Was there a particular moment you can remember that led you to this field?

Yes. When I was in college I was fascinated by everything 'Wall Street'. I was drawn in by the action and went to work in World Trade Center, Tower I in the very early 1980’s. OUCH.

- What drives you professionally?

Every day presents a different set of challenges.

-In your opinion what are the three biggest problems facing the developed and developing world?

2)Non-elected politicians in Brussels that want to strip EU citizens of sovereignty, liberty and democracy.

3) Extremism by the left: A 'social-justice' movement designed to end conservative thought. It seems like totalitarianism because it is. The left are only tolerant, accepting, inclusive if you agree with their opinions – when you disagree they become intolerant, violent fascists.

-If you hadn’t become an investor what would you have done?

Played golf on the PGA tour.

-If you look at recent history, can you identify a turning-point that explains how we come to face the peculiar challenges of today?

It was the excesses of the 1980’s and 35+ years of failed neo-liberal thought and policies that began with bill Clinton and ended with Obama. In reality, this was plunder, (financial fraud), on a massive scale that saw wealth inequality ratios skyrocket.

It started with Larry Summers and Robert Rubin’s convincing Bill Clinton to scrap Glass-Steagall – this allowed securitisations and use of derivatives as speculative financial instruments or weapons of mass financial destruction that allowed creation of massive credit, leverage and debt.

-What are the lessons we failed to learn during and since the 2008 crisis?

Nothing learned – we have re-inflated the same bubbles only larger – no meaningful deleveraging and risk assets are now even more risky.

- Name one measure we might implement immediately to improve the situation.

- If you were a President / Prime Minister what would your first three pieces of policy be?

2) Disband and dismantle the deep state and shadow government operatives working on behalf of the military industrial complex en mass.

- What was your biggest & / or your most recent mistake?

- Name the book that changed you.

- What would you do differently if you were to start all over again?

Nothing, no regrets I move forward!

- Give our readers, members and subscribers a piece of advice that has served you well.

Never invest in anything you don’t fully understand and never, ever believe that 'it is different this time'.

- What is your main anxiety where you and / or your family are concerned?

How the coming global financial collapse unfolds and will DC be stupid enough to allow WWIII.

- What gives you hope for humanity?

As we near our darkest hour, a ray of sunshine will brightly illuminate the process in which we may begin to rebuild our crippled, corrupt and broken financial and political systems from the ground up… The revolution is coming prepare now…