Further reading: Fashionopolis: The Price of Fast Fashion and the Future of Clothes 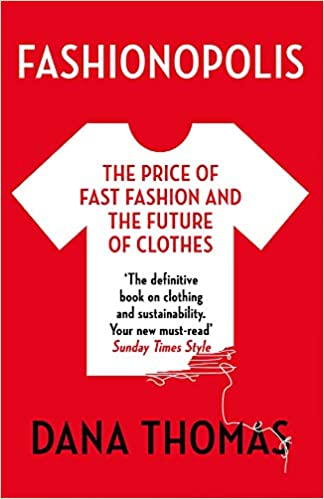 It was the Irish poet and playwright Oscar Wilde who said fashion is a form of ugliness so intolerable that we have to alter it every six months. Today, much of the ugliness remains, but the time span has shrunk from six months to just a few weeks. Fast fashion has boomed, but it’s boomed at the expense of garment makers, consumers and the environment.

Host, Ross Ashcroft, met up with Journalist and Author, Dana Thomas and Reader in Fashion Marketing, Patsy Perry, to discuss the politics and economics of fashion.

The Journalist and Author, Dana Thomas , and her former Washington Post colleague, Nina Hyde, are perhaps unique in writing about clothes not merely in terms of “fashion” but linking them socially, economically and politically to big business. Inspired by Hyde, Thomas began looking at the wardrobes of prominent public figures as political, economic and, particularly, social statements: “In Washington we would go to the White House and cover state dinners, but we would write about what people were wearing to the state dinner and where it came from”, says Thomas.

The author acknowledges that in this era of hyper individualism, there has been a tendency for high profile people to project their economic power and tribal affiliations through their clothes. Alongside this there has been a rise in the fast fashion phenomenon in the UK and the US and the desire for escapism embodied in ‘retail therapy‘.

Thomas points out that the public buys five times more clothes today than they did 50 years ago. “We’ve turned shopping into a national pastime and we aren’t thinking about what we’re purchasing, the long-term impact of these purchases nor that the average garment is worn seven times before it’s thrown away”, says Thomas.

The author also notes that six of the top 55 richest people in the world own fashion companies while Amazon Fashion is the world’s largest fashion retailer. It’s the highly concentrated multi-billionaire owning nature of the fast fashion industry that is killing related industries – dress-makers, tailors, fabric printers and weavers – in developing countries.

The context of this new form of colonialism is a situation in which 98 per cent of the people who make our clothes are paid half a living wage – a cycle which Thomas argues can only be broken if the public is prepared to break its addiction to clothes shopping. The obsession people have with clothes has arisen due to the relatively higher purchasing power afforded to consumers today compared to the past, while the price of clothes has remained stable over the last four decades.

“Today, the average American owns seven pairs of jeans. I think back to the 1980s, if I had two it was a lot. Today, you’ve got ten times the purchasing power and the clothes are the same price. The reason why clothes are so cheap is because we’ve shipped jobs offshore to factories where they’re paying people pennies. In Bangladesh, when I went there, they were earning 68 dollars a month. They have no health insurance, no benefits, no paid vacation, no maternity or paternity leave, no nothing. They don’t even get paid overtime. They have forced overtime.”

Recently, many producers have been looking at ‘slow fashion’ (ie putting out new collections made with longer-lasting organic materials less frequently) to allegedly help remedy these kinds of exploitative practices. However, as individual consumers, there’s far more that can be done to turn things around.

“We need to ensure we aren’t wearing our clothes only seven times before throwing them away. We wash our clothes way too much and so they fall apart faster. Wash them cold and on the short cycle to save energy and to lower utility rates. In this way you’re doing right by the environment and you’re giving your clothes a longer life.”

“Repair your clothes or hire somebody so then you’re contributing to a local economy. Look at the labels just like you do with food to check it’s not a junk piece of clothing. If you need something for a special occasion, rent.” The author notes that: “One out of six people on the planet work in the fashion industry. It’s a much bigger piece of the puzzle than we imagine it to be. And we need to respect it and respect what it produces. We need to think about fashion in a more serious manner.”

The question whether it is desirable that fashion migrates towards a more sustainable form of industry is an issue that Dr. Patsy Perry has seriously considered. However, the Reader in Fashion Marketing falls short of arguing that it is desirable to revolutionize an industry so complex and for which huge swaths of the population depend for their livelihoods.

Perry argues that the original purpose of fast fashion was to democratize it so as to ensure fashion wouldn’t become something exclusively available to the rich. Perry says: “It is a really big and creative industry sector and so important for many entrepreneurs, for fashion design students and graduates. We also have a responsibility to all of those people that are now part of global supply chains, especially in developing countries who are predominantly women, who don’t have other employment opportunities.”

Perry nevertheless posits that the exploitative nature of the industry is unsustainable in its current form and that it needs to evolve into something conducive to both the garment makers and the wearer of threads. Perry suggests that this equilibrium is best achieved through the prism of consumption rather than production, but acknowledges that the former is frequently undermined by mixed marketing messages and confusing price strategies of retailers:

“I think essentially we need to slow down the system and things need to be more valued. We need to meet in the middle somewhere between the retailers and those who are going to then support our shift in consumer behaviour”, says Perry.

Informative and effective labelling is one such potential bridge, although producers seem reluctant to go down this route, preferring instead to keep the process nebulous because, ultimately, exploitation ends up on their bottom line. Perry justifies the lack of clarity in relation to fashion labelling compared to the advances in food labelling by citing the complexity of fashion manufacturing and supply chain issues.

Perry contends that consumers are likely to be confused by symbols highlighting trade-offs or otherwise overwhelmed by too much information. “I think it’s going to be impossible to come up with a holistic, comprehensive, label that would give the information to consumers on both the social and the environmental issues”, says Perry.

Often lost within these abstractions are the workers in the developing world whose exploited sweat shop labour is the source of the production process. The extent to which punters at the end of the chain in cities like London and New York are able to reconcile their moral obligation to these exploited workers with their insatiable desire for cheap fast fashion is an open question.

The problem is that there are not always affordable and sustainable alternatives available for consumers. Whether punters should vote with their feet and wallets by holding manufacturers accountable, or whether governments’ should intervene by bringing in laws to stop the exploitation at source are the key questions. Perry argues that both are needed.

Dana Thomas and Perry agree that sustainability is best achieved by buying fewer but better quality clothes and keeping them for longer.

“We need to think more about style rather than fashion and the fact that you don’t need to be buying something new every week. It’s about developing your own sense of style about what suits you and then just being more selective about what you buy into. We all have a role to play in terms of holding brands accountable, not over-consuming and not supporting wasteful overproduction”, says Perry.

In the final analysis, the critical transactions relate to whether workers decide to sell their labour or not, or whether they decide, collectively, to withdraw it by going on strike. Ultimately, the real power human beings have is not as consumers but as producers.