Further reading: Princes of the Yen: Japan’s Central Bankers and the Transformation of the Economy. 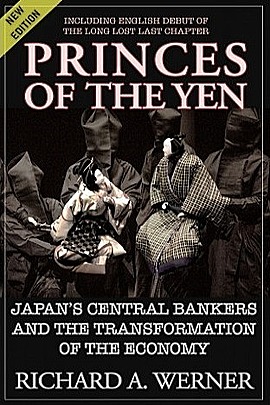 As the Russian proverb goes, there’s nothing more permanent than a temporary solution. Quantitative easing was introduced to buy central bankers time so they could fix the structural problems in the economy. But quickly, QE became the solution to every possible economic hiccup.

Host, Ross Ashcroft, met up with Professor Richard Werner, to discuss how by creating asset price inflation alongside epic amounts of debt, temporary QE has become a permanent problem.

The wrong kind of QE

In a recent report, the House of Lords expressed concerns about the Bank of England’s addiction to, and knowledge gaps, in relation to using quantitative easing. Professor Richard Werner, who invented the term, having first proposed QE as a monetary policy in 1995, is arguably best qualified to critique it.

Given the fact that from the mid-1980s Asia started to emerge as the growth centre of the world and that in 1990 Japanese banks dominated the global banking sector, Werner’s forecast that they were about to go bust, was a contrarian view at that time.

While most strategists were recommending the buying of Japanese stocks in response to the Bank of England’s lowering of interest rates, Werner, in a Oxford University discussion paper, bucked the trend by arguing in favour of selling them.

In 1995, Werner proposed a QE policy tool as part of a rapid economic recovery plan designed to get out of what he predicted was going to be Japan’s move into the biggest recession since the Great Depression. The aim of Werner’s QE policy was to prevent long recessions through increase credit creation and the use of targeted GDP transactions into the economy.

But rather than using credit-based money supply for productive purposes as Werner envisaged, central banks instead pumped printed money into asset markets. This resulted in unsustainable asset price inflationary spirals which set the stage for the subsequent banking crisis and long recessions.

The strategy of juicing asset markets in the short-term has, since the crash of 2008, not only failed repeatedly as a sustainable long-term solution to the problems of boom-bust, but is creating the next time-bomb in the banking system.

“Ultimately there’s no natural income streams to be able to service and repay loans. What you have is capital gains which are contingent on the game continuing. So it’s a Ponzi scheme. Now we’re in a situation where the bubble has not burst yet. And looking at credit creation of central banks and banks across the globe, the scenario is still very bullish for asset markets”, says Werner.

As long as a minority at the top of society are able to to make huge monetary gains from the speculative Ponzi scheme bubbles, and in the absence of any desire on the part of policy-makers to re-float the real economy, it is difficult to see how the majority can extricate themselves from this ‘scatter gun’ approach to QE.

The preference for many Western policy-makers and central planners is not non-inflationary, sustainable or environmentally enhancing economic growth strategies that reduce inequality, but socially destructive boom-bust cycles.

The economist says that it doesn’t have to be this way:

“It is always possible in any country in the world to have high, sustainable, even environmentally enhancing economic growth, that reduces inequality, is non-inflationary and does not lead to crises.”

Werner says the magic formula required is an empirical question that ultimately comes down to political will:

“We can observe high-growth system countries in East Asia – Japan, Korea, Taiwan and, since 1978 under Deng Xiaoping, in China – that established double digit economic growth for decades”, says Werner.

“Developing countries have consistently been suppressed in their economic development and their resources have been extracted very efficiently and very cheaply for the benefit of the industrialised countries. So essentially, it’s a continuation of the colonial relationships on an economic front. This is what the IMF and the World Bank have been overseeing in the last 70 years or so.” 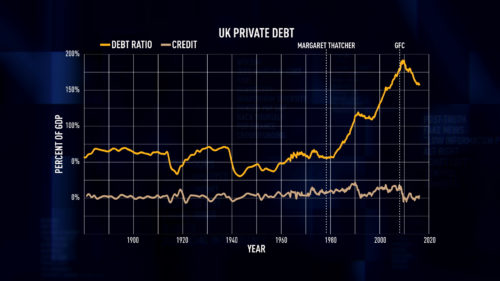 Countries in East Asia – Japan, Korea, Taiwan and China, under Deng Xiaoping – having bucked the bust-boom trend, have adopted a decentralised, high-growth system using credit for productive purposes. A multitude of small banks have proliferated which has been the catalyst for a sustained period of double digit economic growth in the region.

Germany has also favoured using credit for productive purposes. The country’s diversified and decentralised banking system has resulted in the proliferation of small banks which has led to high productivity in the economy and a situation in which the country’s small and medium sized businesses have become the world’s global market share leaders.

In the US, and throughout Europe on the other hand, the trend since 2008 has been the move to greater centralisation of the banking system and the clamping down on small banks. Werner says that 15,000 small banks have disappeared in America over the last three or four decades, while in Europe there are 4,800 fewer banks compared to the beginning of the decade when the ECB was founded.

In citing a recently published empirical study, Werner shows that the centralisation process is part of a broader trend. The study indicates it is small banks that are most likely to lend to small firms and that over time as banks are forced to merge, they only lend to bigger companies. Since 2008 this has led to greater consolidation among the big players and less innovation in the sector as a whole. Operating under increasingly strict regulatory conditions, the smaller banks are unable to meet the same reporting and compliance requirements as the bigger banks and are thus driven out of business.

But Werner is hopeful that the trend can be reversed and views a decentralised banking system as the way forward. With this in mind, the economist has recently been working on how to create the beginning of a network of small banks in the UK:

“We’ve got the Hampshire Community Bank coming online now. We’re about to submit our bank authorisation for a licence to the Bank of England and PRA-FCA”, says Werner.

If successful, the economist could pave the way for a much more direct UK system of QE than is currently the case – an approach, says Werner, that could be the catalyst to getting the UK economy moving.