Privatising British Railways was meant to bring innovation, efficiency, competition and therefore lower fares but the reality, well it’s been very different. The former British Prime Minister and devout neoliberal, Margaret Thatcher was in favour of mass privatisation but even she claimed that privatising the British Rail system was ‘a privatisation too far’, but this didn’t stop her successors. So on this program we ask: was the neoliberal dream of rail privatisation actually the great British train robbery?

Socialising losses and privatising profits is something usually attributed to banking. Slight of hand when it comes to accounting practices is normally the preserve of the corporates and their auditors. But what if both practices applied directly to the British rail network, resulting in British rail travellers getting a terrible deal?

Here to discuss why the cost and quality of UK train travel is so poor is the director of We Own It, Cat Hobbs and transport policy researcher at the University College London, Nicole Badstuber.

We’ll start with an anecdote: One of the crew arrived late to set, and having just overheard our conversation he said “I’m sorry. A bit late. Get on a train and they say that it’s going to arrive at this time, doesn’t ever.” In London  – and across the UK – you’re only about two degrees from any terrible commuting story.  It’s a damning indictment of the British railways. 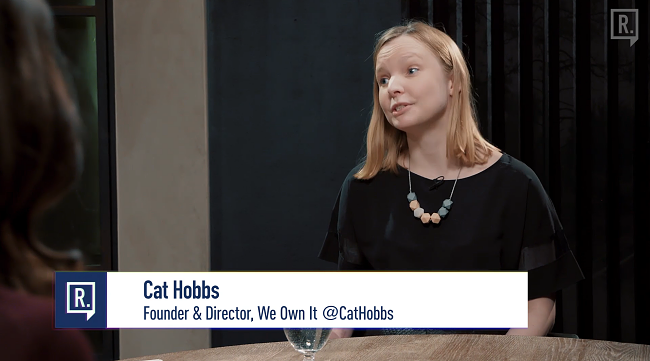 Hobbs told Renegade Inc. that passengers are paying a huge amount for a declining service.

“Fares go up above inflation every year, yet our trains are overcrowded, often they’re unreliable,” she says. “Really, it’s a system where the private companies running the services are benefiting but passengers aren’t really being served the way that they need.”

Hobbs describes Britain’s rail system as fragmented and inefficient: lots of different rail companies running lots of different franchises, rolling stock companies that actually lend their trains to the train companies at a great profit, and then there is Network Rail building the infrastructure.

“As a consumer, as a passenger, you’re standing on the platform, there’s one train to get on, so railways are a natural monopoly and yet they’re being run as some kind of crazy disconnected market. The outcome is train companies are taking the profit, rolling stock companies are taking the profit and passengers are being ripped off again and again.”

“Railways are a classic natural monopoly,” Hobbs says. “It makes sense to run the railways as a network because essentially you’ve got one service, one kind of access point into the railways, one train and one track. From a passenger perspective you don’t have a choice and from a network perspective it makes sense to run that service in an integrated way, with regard to efficiency and economies of scale.

“Research suggests that Britain would save around £1 billion a year if we had an integrated network.

“And there’s all of that inefficiency and waste in the system.” 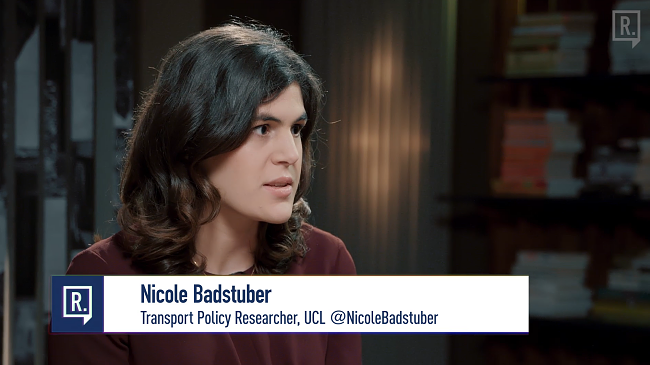 Britain’s railways ticks every one of those boxes.

“It’s a bit of a racket really,” says Hobbs. “If you’re a train company, the point in the system at which there’s any choice is the point where you’re competing to run the franchise. So, over a number of years, you’re given that franchise to run by the government and it’s only when you’re bidding for that franchise that there is some kind of public control element where the government decides what the franchise arrangement is going to be, what it will pay, what we pay and how will that be fair.

“What we’ve seen recently is that train companies are getting away with more and more. For example, on the East Coast line, you’ve got Stagecoach and Virgin running the service. They promise to pay back just over £3 billion over the course of the franchise. They’re paying back more towards the end of the franchise, or they should have been.

“They’ve now said ‘actually, we can’t stick to our agreement on this. We’d like to finish the franchise early’. So Chris Grayling, the transport secretary is effectively saying, ‘okay fine. You did promise us this money for the public purse, but now you’re saying you can’t pay it anymore, we’ll renegotiate’. And those companies will then go back and bid again to run those franchises.

“Stagecoach will bid again to run the East Coast franchise in 2020.

“When investors realised this decision was being made by the Department for Transport, their shares leapt by 13% because the signal the government is sending is ‘do whatever you like. You’ll get away with anything. You can make the profit and the public will pick up the risk.'”

Private operators have government over a barrel

Nicole Badstuber told Renegade Inc. that this aspect of the system is the result of private operators over-bidding for contracts, and then holding a proverbial gun to the government’s – and by extension, the public’s head – when they reach the end of the contract and discover the whole thing has been unprofitable.

“The system structurally incentives companies to overbid because the person or the company that’s going to pay the most to run this railway, or in reverse – demand the least amount of subsidy to run that railway – is probably going to get that contract,” she says.

“If you look at quotes from CEOs, they would happily admit that they will over bid to get the contract because without it they’re not going to have any business. So what we see, and the East Coast Main Line is a great example of that, the line from London to Edinburgh, since 1995 when it was privatised, we’ve had three private companies and the government run that railway and each one of those private companies has overbid.

“One of the companies overbid triple the expected passengers it thought it was going to get. That actually happened. And all three of those companies have now folded, essentially, and put up their hands and said ‘we’re going to walk away from that contract’. So the only company that was successful was the directly operated railways, so the government – the company of last resort – stepped in.”

The government returned about £1 billion for the Treasury over the five years it operated the system.

“It had some of the highest customer satisfaction on the line,” said Badstuber. “And for those people working on it during 2009 to 2014, I think they were very disappointed they couldn’t continue, or at least compete with the private companies.

“It’s structurally incentivising overbidding, which is of course a bad thing because ultimately the government can’t step away from it all because it can’t let the railways fail. It has to step in. It’s a terrible set up, so far.”

This all started back in the 1980s when some fairly extreme right-wing conservative thinkers like Oliver Letwin and John Redwood wrote a book in 1988 called ‘Privatising the World‘.

“They referred to their own ideas as ‘wacky’, and they had to persuade Margaret Thatcher,” Hobbs said. “Wacky good, according to them, perhaps…

There are areas where we need democracy, where people need some kind of say, and often they’re natural monopolies.”

“And they are a network, so we can take the water companies, we can take railways,” she says. “Breaking them up does sort of defeat the purpose of what the utility is set up to do.”

Back in the 1980s, British Gas actually put shares up for sale, allowing members of the general public to invest in its infrastructure. The share offering was put together by a group called MM Rothschild & Sons, which was very much in bed with Letwin and Redwood, who were fairly involved in the policy papers instituting this ‘wacky’ idea. It happened with British Gas. Why didn’t happen with the railways at that time?

Hobbs says that it was considered at the time to be ‘going too far’.

“I think they had to lay the groundwork with energy and water first,” she said.

Badstuber says it was a test case, a proof of concept.

“They still thought the railways were quite a complicated thing to privatise, so they came up with a few options: one was to sell British Rail wholesale, as a big unit,” she said. “One was to set up sort of regional units of the same but integrated track and train, and the third option they came up with was what we have today which is to separate trains, tracks and rolling stock. The fourth option was to separate it based on business sectors: one for freight, one for long distance, one for regional and one for commuting.”

As for the offering of British Gas shares where members of the public scrambled to get in early for a chance to make some money, jump forward to today, we find that really hasn’t been the case.

“I think the idea was, you have a sceptical public and you have to sell this idea,” said Hobbs. “The way they tried to sell it was to say, ‘look, you can have a piece of these companies. You can own these companies by buying shares’, but what we’ve seen in reality, is that actually individual shares have dropped hugely over the past 40 years and institutional and foreign owned shares have increased.

“The British people don’t own British companies as a rule.

Hobbs and Badstuber believe public ownership is the solution to the problems of British Rail but find themselves regularly shot down by all the right wing think tanks who are absolutely jammed with free market types who claim they’re a bunch of socialists.

“I think it’s amazing how controversial this idea has often been seen to be when actually, the vast majority of the British public believe in public ownership for a whole range of sectors,” says Hobbs.

“Rail, energy, water, NHS, council services, buses and so on. And all we’re really talking about here is, okay we all pay into this service, we all use it.

Let’s reinvest the profit and let’s have a democratic say over how these services work.”

This week’s video comes courtesy of the Technical Standards and Safety Authority Union which demonstrates the absurdity of privatisation which has allowed foreign publicly owned rail networks to buy into Britain’s rail network. It takes the form of a thank you message from the people of the Netherlands, France and Germany, who, thanks to the privatisation of British Rail have cheaper access to European railways:

In 2012, the Netherlands received £3 million just from Greater Anglia.

“Not only that, the British taxpayers pay its franchises massive subsidies, without which it could never make a profit. So even if you never catch a train, you’re still sending us money.

“But before you say, ‘Ah, we’ve left the EU,’ that doesn’t make a difference. In fact, the Tory government want to privatise even more, which means we can take over even more. So to the British people, we want to say ‘thank you'”.

“There are about £6 billion at the moment,” Badstuber says.

“At the moment if you look at the balance books, it looks like the government is mainly giving loads of money to the infrastructure company, the public body, but actually what is happening is that a lot of money is then being funnelled back to the private companies by reducing their costs.  At the moment they only spend 37% on operations and maintenance, and a lot of the money that they do get is going to service the loans and the debt they already have.”

Tune into the rest of the episode to find out the financial benefits of a nationalised or public sector railway.