After all the mainstream media’s fuss about the Trump administration’s “war on the press”, you’d think we would be hearing more than crickets from them as this same administration makes the shocking move of forcing RT America to register as a foreign agent. Luckily, as always, we can at least count on Redacted Tonight’s Lee Camp to rip all this bullshit to shreds. 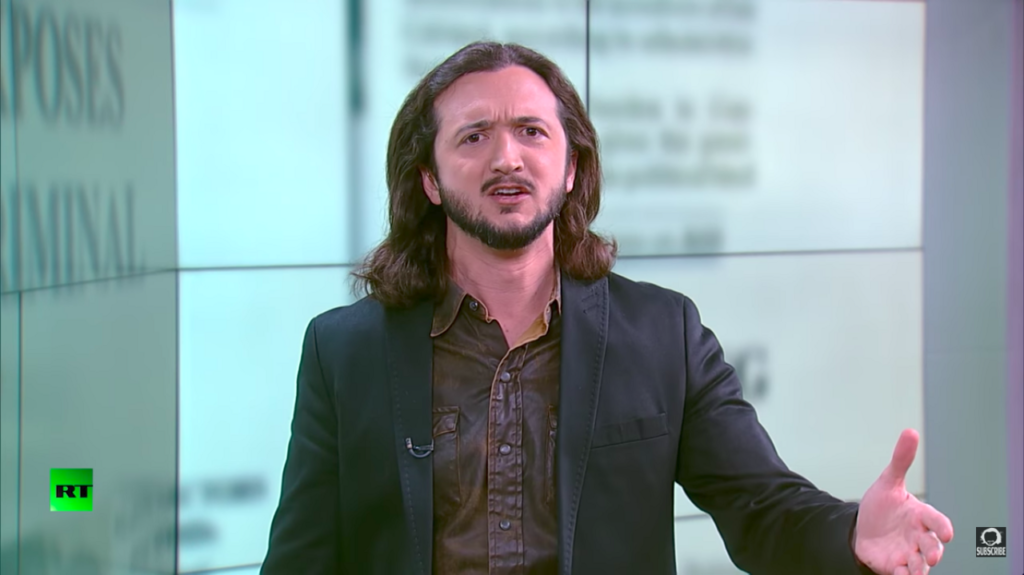 I’ve been in debates with establishment loyalists online where I shared undeniable video evidence of a claim I was making (Julian Assange said X or CNN did Y or whatever), and had it dismissed as fake news because there was a little green ‘RT’ logo in the corner of the footage.

That’s how brainwashed these people are. There is a significant percentage of the US population which, due to relentless propaganda efforts by corporate media, now reflexively shoves away everything that has anything to do with RT without any critical thinking whatsoever.

After all the mainstream media’s fuss about the Trump administration’s “war on the press”, you’d think we would be hearing more than crickets from them as this same administration makes the shocking move of forcing RT America to register as a foreign agent. This move will force the outlet to post a disclaimer on all content, to report its activities and funding sources to the Department of Justice twice a year, and could place an unrealistic burden on all its social media activities as it submits to Department of Justice (DOJ) micromanagement.

Luckily, as always, we can at least count on Redacted Tonight’s Lee Camp to rip all this bullshit to shreds.

Camp, one of America’s handful of surviving comics still using humor to punch up at real power, recently delivered an opening monologue for his show which completely destroys the mainstream narrative about RT America.

His argument is simple: from personal experience Camp knows that it’s impossible to criticize establishment power on mainstream news outlets, but RT will allow him to. Americans who see the their country’s neoliberal neoconservative one-party death machine for what it is and want to speak out about it to make their country a better place have essentially two choices: spend their energy screaming into sparsely-populated fringe sectors of alternative media, or go on RT.

There is no one more qualified to speak from experience on this matter than a comedy veteran with anti-establishment leftist views whose show is currently seen on RT America. Camp has been around, trying to make a living speaking truth to power while cracking people up, and he can speak from authority about the dead ends he’s encountered on that path. Mainstream media shut him down on all fronts, and RT America let him speak.

What this means is that American mainstream media outlets are responsible for the fact that shows like Redacted Tonight appear on RT. By deliberately de-platforming leftist and other anti-establishment voices on all their outlets, corporate media networks create an impenetrable blockade for dissenting individuals pursuing their innate human right to speak and be heard, leaving them with no other choice but to go on RT America. All this hysteria around RT has been establishment power bitching about an outlet stepping in to fill a vacuum that establishment power itself created.

These US corporate media outlets which have been brainwashing Americans about RT America for months now created RT America. What would happen if shows like Redacted Tonight could find platforms on a mainstream network? What would RT America have if audiences who want to hear dissenting viewpoints weren’t forced to go there to hear anti-war, anti-corporatism, anti-oligarchy perspectives? If the plutocrats who own establishment media weren’t actively refusing to platform anti-establishment voices, there’d have been no empty niche for RT America to fill.

“I speak only for my show — I don’t speak for any other show on RT America. I write the words I say on Redacted Tonight and have never been told I have to say anything.

Compare that to… (Oh, so many examples to choose from! How can I only pick one?!)… let’s say Melissa Harris Perry on MSNBC. After being forced out she said she was censored often.

As an example she said — close to showtime — that she was told not to cover Beyonce’s Black Panther inspired Super Bowl halftime show. In no uncertain terms MSNBC heads stopped her from talking about it” – Lee Camp.

Camp wrote the above in a response to a ridiculous, deceitful smear piece that was published about him in the New York Times which focused on his presence on RT America. How many voices like Camp’s do you read in the New York Times? You don’t read anything by Pulitzer-winning journalist Chris Hedges there anymore, that’s for damn sure. Hedges was pressured into silence about his criticism of the Iraq war by the Times, so he left. Don’t worry though — you can now find Hedges on RT America.

Think about that. The New York Times ran a smear piece on Camp for going to the one place where his voice isn’t silenced by outlets like the New York Times. And now these same outlets are not just ignoring but in some cases actively cheering for an establishment effort to stop people from consuming any content which questions the guiding wisdom of Big Brother.

Camp said it best himself:

“Being a born and bred American who just wants to make America a better country — that doesn’t stop the assault against us.

Because on this show we talk about redacted news; that is not okay for the ruling elite. And therefore so many great anti-establishment programs must be branded with a neo-McCarthyist paintbrush.

The corporatocracy doesn’t have any logical or convincing arguments against what we’re saying, so they just attack where we’re saying it.”

Rogue journalist, poet, and utopia prepper. You will disagree with me sometimes. And that's ok.