Further reading: License to be Bad: How Economics Corrupted Us 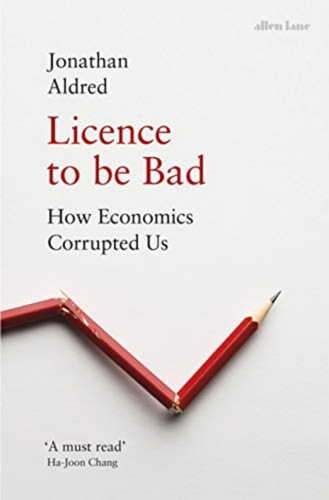 Warren Buffet’s sidekick Charlie Munger once said, “show me the incentives and I’ll show you the results.” His logic is simple when the incentives are misaligned so too are the outcomes.

Banking is a sector that proves his point where so many people are rewarded for exploiting society. But what if our overall economic incentives are also skewed? What if the way our economics have evolved now punishes those who want to do what’s right and rewards those who do wrong?

Cambridge economist and author of License To Be Bad, Dr. Jonathan Aldred, met up with Renegade Inc. to discuss these issues.

The economist and author highlights how the promises made by recent successive UK governments to reduce inequality are not matched by socioeconomic indicators which point in the opposite direction. The said promises, in other words, “weren’t worth the paper they’re written on”, says Aldred. Furthermore, [politician’s]…didn’t believe them when they made the promises and they didn’t do anything when they got into power to try and deliver on those promises”, adds the economist.

When the public began to question the fundamental premise (ie economic ‘trickle down’) upon which these promises were made, UK government ministers attempted to allay public discontent in relation to the deception by arguing that there is no alternative (TINA) to their strategy. The basic line was ‘we tried our best to reduce inequality but failed’.

The TINA deception played on the British people was underscored by a widespread dogmatic ideological adherence to neoliberalism. The political consensus up until the dying days of Ed Miliband’s tenure as Labour leader, was that that inequality was an inevitable consequence of a market-driven system that could only be tweaked through, say, tighter regulation or inching up the higher rate of tax.

Even now, there remains a widespread reluctance among the political class to accept that the notion of economic trickle-down is, to use Aldred’s phrase, “a fundamentally flawed paradigm.”

Neoliberal apologists regard regulation and government intervention, not as a mechanism to help reduce inequality, but, by contrast, to be a major contribution to the problem itself. The neoliberal free market, in other words, is widely regarded among the political class as a solution to a current crisis when, in fact, it is having the opposite affect.

“Under neoliberalism”, says Aldred, “you’re always going to get more and more inequality, the hollowing out and the shrinking of the non-market part of society. I think the historical evidence is clear that markets don’t work unless they’re embedded within a very robust framework of institutions and laws and political arrangements. All these things have been pushed aside and eliminated.”

Much of the unwritten moral and ethical codes that were regarded in previous generations as an adjunct to the rapaciousness associated with ‘market forces’, are also seen to be a necessary prerequisite to the functioning of society. The notion of ‘greed is good’ was widely regarded as an anathema. Human characteristics that run counter to the kinds of behavioural norms associated with neoliberal ideology, such as immorality and selfishness, were seen as natural.

From the perspective of Dr. Aldred:

“What was once seen as selfish, counter-productive or irrational behaviour is now regarded as smart…That notion is now embedded into everyday culture – how to achieve things collectively and how society can work effectively.”

According to Aldred, the ‘selfish as smart’ trait, gives human beings a licence to be bad. In previous generations, people didn’t need a license to be bad, because the requirements necessary for survival were determined by an overriding need to undertake tasks for the collective good of society as a whole.

It’s the notion of collective responsibility and the story behind the big economic ideas of the post-war period that is the focus of Aldred’s book, License To Be Bad. These ideas, says Aldred, are less about the kind of politics of The Mont Pelerin Society, but rather, are “new economic ideas like free-riding, social choice theory, public choice theory and all these bits of pure high theory that were being developed. They then filtered out into wider society.”

“These ideas changed how we think about politics; about voting and how we think about cooperation. So I was sort of trying to put my finger on, what difference did they make? Was there a kind of common theme? You then start to realize it’s about the shifting of morality and the way we see the world. I think what changed significantly in the immediate post second war period was this idea that economics should be a science. And what flows from that, is you don’t look at politics, philosophy or history and so you don’t express your ideas in terms of these mathematical models. [As a result], you immediately kind of lose your bearings a bit.”

Aldred’s outlook contrasts with the approach of the old fashioned political economists whose critiques fail to take into account the moral implications that result from their theories which, if they were to highlight, would be seen as undermining what they regard as a morally neutral and just science.

The thinking of traditional political economists is deliberately intended to absolve economic theory from any kind of moral responsibility.

The concerted attempt to transform economics from a moral-based science into a science devoid of morality, began to take shape in the US after WW2. This was heavily influenced by the role of economists as planners during this period predicated, for example, on the need to calibrate crops in order to maximize the nutritional requirements of the population. This cold and calculating view of economics was resisted at Keynes-influenced Cambridge which had a very different view of what economics was.

However, asserts Aldred, this changed in 1983 when the two most powerful economists in Cambridge who had worked with Keynes – Joan Robinson and Nicky Kaldor – died:

“The balance of power in Cambridge economics shifted and suddenly it then said, ‘let’s be a kind of copy…of what is going on in the US.’ The upshot, says, Aldred, is that “if you want to get a tenured position you’ve got more chance if you’ve got a PHD in mathematics or a PHD in Operations Research or something like that… But employing [these kinds of people] locks in a certain kind of economic [thinking]…They can’t teach economic history because they don’t know economics let alone an economic history.”

As Aldred concurs, the notion that the discipline of economics is a hard-wired science focused on a narrowly defined brief, largely remains the embedded view among the vast swath of mainstream economists throughout the UK and the US.

They appear to be unaware that their discipline is in some way responsible for the chaotic nature of how our economic affairs are organized.

“I think they don’t see it because they say, you know, ‘my job is to give you a number which says what level of minimum wage should we have without increasing unemployment,’ and ‘I’ve got a mathematical model and I’ll crank that and I’ll give you a number’, says Aldred. The result is, politician’s then take the numbers and run with them – a process that mainstream economists are more than willing for politicians to undertake.

“What gets left out…in that model, is that by cranking the handle to get the numbers out, there are all kinds of assumptions about human behaviour and how labour markets work which is loaded with ideology. It might seem obvious to a non-economist, but we do need to get beyond this idea that economics is a science [and that it]…can be a better comparison to experimental sciences like chemistry and biology.”

Aldred posits that many people are deferential to economists and are too readily willing to accept the numbers they are given without checking the assumptions with regards to where these numbers come from.

“My advice to people is don’t listen to economists unless you can understand their argument”, says Aldred.

Too often people get tricked and intimidated into accepting the arguments of economic ‘experts’ based largely on some kind of appeal to authority.

It’s often the case that as the result of a challenge to their numbers, the emperor, as Anat Admati attests, is frequently found to be naked.

Both Aldred’s and Admati’s argument, in essence, is that economics has been a corrupting influence. In order for this to change, the public and politician’s alike have to be more diligent in terms of pushing economists to present their methodology openly and honestly.

In the view of Aldred, the resulting honesty will have the potential – through automation – to free up people from their day-to-day workplace drudgery which, in turn, will provide a possible (albeit temporary) solution to the crisis of capitalism. As Dr. Aldred says, “I think there are self limiting elements within capitalism on inequality. At the simplest level, if inequality gets to extremes then poor people can’t afford to buy stuff. We’re already seeing that, which is why there’s so much private debt.”

So there’s only so far inequality can go when something has then got to give.

The economist and author also posits that the other factor which is unsustainable, is the way in which the system incentivises the corruption of economics by disproportionately rewarding those students who are part of the problem. “The idea that economists are neutral and can’t comment, is going to have to give”, says Aldred.

Some economics courses are beginning to challenge the prevailing orthodoxy in terms of questioning the underlying premises upon which the economy works. “They are springing up and some of them have been established for a few years now. They’re not at the elite universities”, says Aldred.

On the surface, this might appear ironic, but nevertheless in Aldred’s view, this is not surprising because:

“the elite universities don’t feel they have to change. They’re already attracting the students and it’s the conveyor belt. Once you get an economics degree from the London School of Economics or whatever on your CV, then that opens the doors to various jobs. Therefore knowing that, people apply to read economics at The London School of Economics. What they do in the course is kind of irrelevant.”

At the end of his book, License To Be Bad, Aldred quotes Joan Robinson: ‘The purpose of learning economics, is to avoid being deceived by economists.’

“So what non-economists must never do”, says Aldred, “is just take what economists say as given. We’ve got to challenge that. We’ve got to demand answers and if we don’t get answers then we can dismiss what the economists are saying.”