“Do not treat others in ways that you would not like to be treated”, is the Golden Rule maxim that dates at least to early Confucian times. But with white America’s seemingly tacit acceptance of their governments appalling treatment of black people in light of the killing of George Floyd, this ‘ethic of reciprocity’ principle is clearly regarded by many as little more than an exercise in window dressing.

In the view of Ajamu Baraka, the killing of George Floyd by the US police force is the embodiment of a systematic brutality. African-American communities are dying unnecessarily he says, ostensibly as a result of Covid-19 but more fundamentally after having fallen victim to a neo liberal regime that has closed down hospitals. It’s the structural contradictions of a system in crisis that is driving the resistance on the streets.

The killing of Mr. Floyd was the trigger that set this resistance in motion. Over the last few months large swaths of the US population appear to have been subjected to a process of radicalization and increasing levels of class consciousness. People understand that under capitalism they have no control in their lives and that their treatment by the ruling class is akin to cog in a capitalist machine.

The global nature of US capitalism is such that it has turned inwards against it’s own people, a process that has intensified over recent years. This has been facilitated by the introduction into the US of a low wage economy predicated on a global south ‘plunder and pillage’ compliance model.

Baraka argues that both the Covid-19 outbreak and the George Floyd trigger point caught the establishment momentarily off guard only for them to subsequently reorganize to preempt the possibility of real radicalization. “You saw some of the symbols of that with the police kneeling with the protesters. They are trying to erase the distance between the people and the state, giving the impression that it’s only about come cosmetic reforms and everything will be just fine”, says Baraka.

It’s not a strategy the people are buying. In the medium to long term, however, this does mean that if fundamental positive social change is to be achieved. the public focus will have to pivot away from George Floyd towards broadening the protests to encompass an analysis of class in a more fundamental way. The US establishment is aware that what is being fought is a class war and thus it’s on the offensive.

It’s already deploying the army in an attempt to enact regime change against the American people. “After Donald Trump tweeted that ‘once the looting starts, the shooting starts’, it became quite clear that the authorities were ready to use lethal force against their own citizens and residents”, says the political activist.

This is clearly a problematic situation for a country that likes to promote itself as the self-appointed policeman of the world. While pretending to be the protectors of human rights or, as Barack Obama put it, “the indispensable power”, the US is, in reality, the number one threat to international peace and the number one rogue state on the planet.

This contradiction is indicative of a global capitalist system in crisis. Billions of people who are living in abject poverty is a consequence of being incorporated into this world system. So it’s quite clear that neo liberal capitalism is unable to address the objective human rights needs of global humanity”, says Baraka.

The rhetoric that has emerged from the belly of the capitalist beast, does not match the reality on the ground. New York based writer and activist Margaret Kimberley believes that American exceptionalism stems from the nations role as a violent global gatekeeper for capitalism. This explains why the country is in a permanent state of war both internally and globally.

America’s use of violence in this way cannot be reconciled with democracy:

“You can’t have injustice abroad, but have justice at home. The two are linked. When you have a country that sees itself as having the right to do whatever it wants to anyone, then that ethos is repeated here”, says Kimberley.

But with its sense of moral superiority in tatters in the eyes of the world, for how much longer can the US machine keep going? With the absence of any barbarians at its gates, it seems unlikely that the US empire will be prone to any external threats to its power in the medium to long term.

Furthermore, any threats from within its borders depends to a large extent on the capacity of the corporate media to hoodwink its populace. “If you depend on corporate media, you don’t know what’s going on in the world. So there’s a lot of lying going on by people at the top. And it keeps the population compliant”, says Kimberley.

The Tweedledum and Tweedledee nature of a US political system in which two virtually identical ideologies compete for the reins of power, further reinforces an already inequitable system that feeds into the sense of public anger:

“We see what a failed state we’re in. We have a lot of suffering in this country and it’s something that is not acknowledged. There are 30 million newly unemployed people, many of whom can’t even access their unemployment benefits. And so people are struggling. I think a lot of people are in the streets because they’re angry about many things”, says Kimberley. 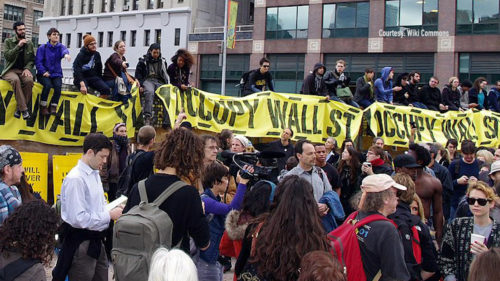 The writer and activist argues that Barack Obama bares a lot of responsibility for this state of affairs. He was marketed by the ruling class to promise change and offer hope for millions of poor people – promises which he failed to deliver. Instead, America has been divided on racial lines, augmented by systemic police brutality.

But with four decades of neoliberalism inextricably drawing to a close, Kimberley anticipates that the US empire could fall apart with all the possible opportunities and potential threats that that entails:

“When countries go their own way, that’s when the hammer drops. Iran delivered oil to Venezuela in defiance of the US. That’s what we need. People need to be more aware so that they know when they’re told not to like a country they should stop and think about what that really means. I hope the multipolar world is here to stay. It’s all to the good. It benefits everyone”, says Kimberley.