Why does a basic income need to be universal?

A Universal Basic Income is a wolf in sheep’s clothing. Even Australia’s opposition party has rejected the policy proposal on the grounds it is free money for millionaires. So why does this idea continue to be so popular?

Robots are a foolish reason to consider a universal basic income (UBI). And yet so many still want to indulge in such nonsense. The link between technological disruption, income security, and UBI, is weak at best. And existing targeted welfare systems already achieve income support from any type of workplace disruption, robotic or otherwise.

The fundamental idea behind a UBI is that all members of society should get an equal share of that society’s income prior to even attempting to earn a market income, and regardless of what their market income is. It is a worthy principle.

In contrast, a targeted welfare system phases in income support when individual or family income falls below particular thresholds, and phases it out again when market incomes rise. This is in effect a national income insurance scheme, and again, a worthy idea.

So why all the buzz about the less progressive UBI welfare system that will have to raise additional taxes from the wealthy, only to give it right back? Wasn’t less administrative cost one of the big selling points of a UBI in the first place?

The main difference between a UBI and targeted welfare system comes from the different effects of each system on the incentive to work, and as a consequence, the efficiency of the labour market; the largest and most important market in the economy.

It might be a surprise, but the UBI wins on this front. If there is to be any genuine economic debate about a future with a UBI, it is will come down to this.

To untangle why the UBI wins in the economic efficiency stakes compared to a targeted welfare system, we need to tap into the economic concept of effective marginal tax rates (EMTR). This concept describes the difference between an additional dollar of market income earned and the change in household income after considering both taxes and any changes to welfare received.

A simple example demonstrates. In Australia, family benefits are a type of welfare paid to parents on low incomes. Because it is targeted and not universal, this welfare payment phases out at 50c per dollar of income earned by parents until it is exhausted and no benefit is received.

This massive wedge between what employers pay, and what households receive, generates inefficiencies. Workers might decide not to change jobs for the small amount of extra money they get, nor invest in training that provides them only tiny gains in after-tax income. Economists call these effects a welfare trap, since all the incentives to increase work and income are eroded by the high EMTR.

This massive wedge between what employers pay, and what households receive, generates inefficiencies.

But the less targeted the welfare system, the longer the phase-out income range, and the lower the effect of this on EMTRs. The stylised figure below helps demonstrate. The top panel shows with the orange line the effect of a phase out of welfare at 50c per dollar at household incomes less that $50,000 per year. In addition is the income tax system that begins at an income of $20,000 with a marginal tax rate of 20%, and ratchets up to 40% at around $40,000, which is shown in blue. The second panel shows what happens if the welfare system is less targeted, phasing out at 25c per dollar all the way to a household income of $100,000. Here, the EMTR does not rise as much for those households with incomes near $40,000, but it does rise for higher-income earners. Yet the maximum EMTR is now just 65%, which is a much more efficient outcome.

The third panel shows just the marginal tax rates with no phasing out of welfare. This is the outcome from a UBI, as it is, in essence, non-targeted welfare. The catch, however, is that because a UBI must be paid to many more households with high incomes, the taxes on these same households would need to be increased. Or alternatively, taxes would need to be increased on companies, property or economic rents, that are mostly paid by these high-income households. The bottom panel shows the increased tax rates on high incomes that would need to account for this.

At the end of the day, the case for a UBI boils down to a general case for a greater role of the state in expanding the welfare system as a nation income insurance scheme, which is likely due to the growing volatility of market incomes. This volatility might be coming from automation and robots in some sectors, but in others, it comes from the casualisation of the workforce, with zero-hours contracts, and fewer employer obligations in terms of job security.

The main economic benefit of a UBI over a targeted welfare system is that it results in lower effective marginal tax rates across the board. However, this outcome can also be achieved by expanding existing targeted welfare systems to make them less targeted at low incomes only so that they also reach middle-income households. 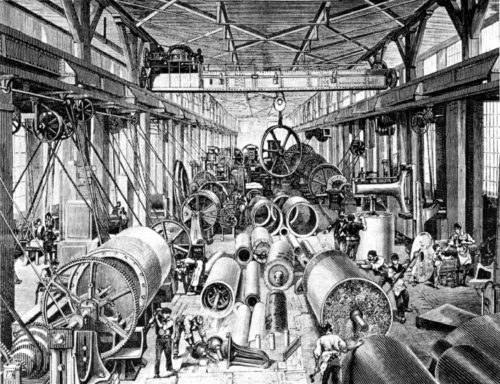