In our first program with Camila Batmanghelidjh, we focused on the closure of her charity, Kids Company. In this program we discussed with her what 21st century children’s services should actually look like.

After 20 years in the sector she was keen to give us evidence based recommendations that would meet the needs of vulnerable and traumatised children. We asked her to explain what her approach would be to ensure the well being of today’s at-risk kids.

Over the last 20 years, Kids Company partnered with scientists to look at what was happening to the neurobiology of children that had suffered chronic maltreatment and neglect.

In 1996, when she first met the kids that would come into their care, Kids Company had about 100 children from gangs whose behaviour was strikingly similar.

“I found they were disturbed in a very similar way,” Batmanghelidjh told Renegade Inc. “Like, they would explode suddenly and end up stabbing each other in a frenzy and be completely out of control, and then afterwards completely regret what had happened. I kept going home at night thinking, ‘hang on a second, these kids are very similar'”.

There was a universality to their behaviour, and the Kids Company founder knew there had to be an explanation. 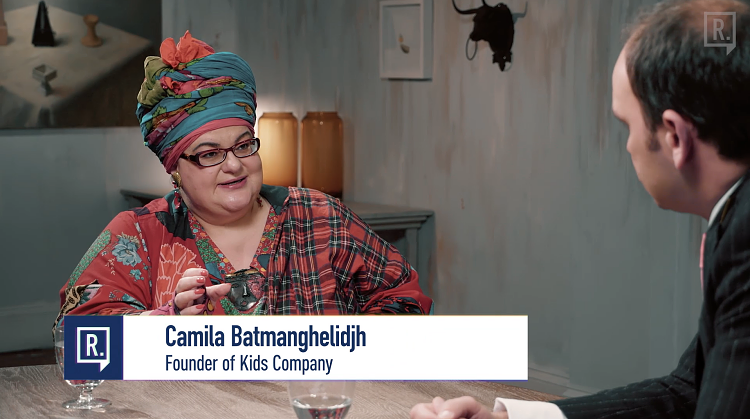 So she brought in a team of scientists and formed some 35 scientific partnerships with different institutions.  Batmanghelidjh set up Brain Lab at Kids Company to study their behaviour through electrodes, placed on the skull, that picked up images and waves of how these children’s brain were functioning. The scientists began interpreting the collected data and what they found was that actually, the children’s brains were functioning similarly to those of war veterans.

“Inner city children were exhibiting the same stress and distress profile as soldiers who’d gone to war, except that their war was surviving childhood in the ghettos of Britain,”  Batmanghelidjh said.

So the Kids Company founder and the scientists began crafting a program that would allow the children’s brain-function and physiology to recover.

“This was really important,” she said. “We suddenly understood that the kids’ biology had changed because of being constantly frightened.”

The prefrontal cortex is responsible for controlling the emotionally driven parts the brain, the limbic system. A well-balanced individual who can control their tantrums and emotions, their frontal cortex kicks in to calm them down.

“That is how you regulate yourself,” said Batmanghelidjh. “So you go to your office and you think ‘I want to punch my boss’ and your frontal lobe says ‘no no no no, don’t do that. That’s a really bad idea, you’re going to lose your job. Stop it.’ The frontal lobe’s development is made possible because of the kind of care you have had.

“A good frontal lobe is only possible when you have a good carer who actually really loves you,” she said.

“Attachment and love literally hard wires the capacity to care for yourself into your brain. So many of the children we cared for had had such poor attachments that they hadn’t had the care that would have developed their frontal lobe. So their controls were poor, and at the same time they were constantly frightened, so their brains were releasing vast amounts of fright hormones. This fright hormone gets into the emotionally driven parts of the brain and it literally electrically disregulates them. So the next best thing to do is to evacuate the stress.”

Up until that point, the only refuge these kids had to evacuate their stress was through fights and other forms of violence.

“Fighting expels the stress, it actually calms the kids down,” Batmanghelidjh said. “The same with self harm. If you scan the brain of someone pre self harm, you’ll see the agitation in the emotionally driven parts of the brain, and after they’ve self harmed you look at it again, you can see it’s calmer.

“I began to understand that violence was actually a substitute soother for these kids.”

Child services a relic of a Victorian era

It’s a really difficult story to get across, one that has not been helped by the right-wing press that attacked Batmanghelidjh so savagely. Their views on leadership are relic of a Victorian age. Almost all of them will say ‘you know what, they just need to pull their socks up these kids, so they can get on with it and work their way out of poverty.’

Batmanghelidjh says evidence-based treatments and programs are a remedy for that sort of rhetoric.

“There’s an 80 percent re-offending rate across the world in youth custody programs,” she says, “The prisons at the moment, run by the government and private companies, are out of control. Staff are getting attacked. There’s an incredible number of attacks on fellow prisoners. There’s prolific drug use and radicalisation.

“The way the state is managing criminal and violent behaviour is not working.”

The treatment programs offered by Kids Company were so efficient that judges were suspending sentences so the children could be offered support by its provisions.

“The kids were getting better,” Batmanghelidjh says. “Because what you do in sitting down with a child and explaining that the core of their problem is their inability to manage their emotions and their energy, is you equip the child with proper strategies to deal with this problem.

“There are some really interesting management strategies. For example, intensive sporting activities, calms this stress response down. Repetitive rhythm gets into the emotionally driven parts of the brain and regulates the rhythm. That’s precisely what monks are doing when they meditate through regular breathing and chanting: they’re regulating that area of the brain.”

Nature or nurture? It’s both

The other emerging science is called ‘epigenetics’. Up until very recently, people used to think that our genetic makeup meant that we are all pre-programmed and that growing up was simply a matter of growing into our pre-programming. Now what they’re beginning to realise, is that there’s an interplay between genetics and environment, where your environment is capable of “switching off” and “switching on” various genetic aspects.

“We are now realising that there is an important relationship between conditions of care and how biology responds. There’s research even showing that in the past if your grandparents, for example, had very traumatic experiences, that can get transmitted via a biological pathway and leave a mark on the gene of the offspring.”

A lot of the kids Batmanghelidjh and the staff at Kids Company were dealing with had to grow up prematurely.

“But but in order to arrive at that point, where the child can think, you have to mimic a good family experience,” Batmanghelidjh says.

Watch the full episode above to discover how to design educational and care environments so that children can thrive.

One thought on “Child services fit for the 21st Century”