Hey Britain – Your Kids Have Just Been Privatised

The infamous Conservative March 2016 budget was to capture ‘the next generations’ and control their cognitive map.

Most people judge others using their own value system. The British, in general, are a reasonable, tolerant, decent bunch. The problem with reasonable, tolerant and decent people is they can miss Machiavellian moves when they have to scrutinise somebody.
In George Osborne’s mercurial March 2016 budget he showed his own Machiavellian sleight of hand. He is now seen as a politician whose leadership ambitions come before the welfare of the British people. Osborne’s allegiance is to The City not the country. When he and Peter Mandelson holidayed on financier Nat Rothschild’s yacht do you think they talked about free school meals and increasing the economic opportunities of the people in Grimsby?
Look at his actions and we see that one of Osborne’s aims is to reinstate the class divisions that began to ebb away with socially progressive policies. This last budget sought to weave a line into the fabric of society between the haves and have-nots. On one side of the line the haves are exposed to increasing economic opportunity, at the expense of the economically compromised on the other. Hierarchies are easier and more profitable to manage – especially if you’re going to have low to no growth for a couple of decades.

Politicians today are bought, and the risk-averse rich are permanently paranoid. The rich need the gap between them and everyone else to be as wide as possible. This insatiable desire for more is not just greed, it is a matter of necessity.  This imposition gives politicians leverage and subsequent reward when out of office. Blair was the torchbearer of this business model.

In office Blair and successive UK ‘stewards’ chose to ramp house prices to win elections and drive ‘growth.’ But now the political class has a structural issue. We are at the end of the debt cycle and there’s nowhere else to go.

If the housing market is cooked and you aren’t creating new wealth you need to apportion the wealth of others in different ‘markets’. There are many examples of stealing others wealth but in the March 2016 budget there was one that will irreversibly damage the fabric of British society.

Without warning Osborne used the Finance Bill to take all schools from local control and privatise them. Nobody is really talking about the economics behind this, yet the perceptive Jonn Elledge points out that Osborne, a historian, is mimicking the rent-seeker-in-chief and original crony capitalist Henry VIII. Mr. Elledge claims that Osborne’s raid on schools is akin to the biggest land grab since the dissolution of the monasteries between 1536 and 1541. He’s right… but it’s even worse than that.

With characteristic fuzzy detail Osborne and his wider government have decided that every school in Britain will become an academy by 2022. When Henry VIII went after the monasteries he needed the rents and, for security, needed to redistribute the land to his cronies. If you exchange the words monks with teachers we have the same mechanism. Handing state property to political cronies of all colours. But it’s worse than that. Not only are they stealing the rents and land but also taking control of the cognitive map.

Think of the rent you can extract when you have every child in the country coming through a privatized education system. Especially if private companies own the means of production, the payroll and can dictate national curriculum. Now think of the power you can yield if you can get young minds to accept a version of events or an economic ideology.

A question: why was the first stage-managed post budget photo shoot in a school in Yorkshire? Must have been a coincidence.

Bankers and politicians are not value creators. Only with cash and access can rent seekers take profits out of industries that should be the preserve of vocational types who love their work. Teaching (and working for the NHS) is vocational. How many teachers and doctors got into it for the money?

The Extra Mile vs. The Bonus Culture

Rent-seeking is the use of a company or organization to obtain economic gain (or a free lunch) from others. It involves seeking to increase your share of existing wealth without creating new wealth. In this case privatisation means shareholders walk away having ‘monetised’ the value that every teacher and every doctor creates. This is not free market economics – it’s monopoly. And it is totally unworkable as nobody with a modicum of intelligence will do the ‘extra mile’ for shareholders. All the talent will go and a ‘bonus culture’ or other monetary based sweeteners will only drive them away further.

It’s no secret that Nat Rothschild wants to privatise British roads and collect the rents. But that will be a real fight as motorists are well represented. Starting with schools is an easier, softer target. This is the approach: “we are rich you are economically compromised – we know better as we are rich – you do want the best for your child don’t you?”

Machiavelli and that wife slaughtering King would have smiled.

The profit motive has no place in education. Schools and the Intellectual Property used to educate the next generations should never be commoditised and securitised as a rent flow. The distorting effect is too dangerous.

Teachers, like doctors, should never be seen as economic units. British children should not be used as vehicles to unlock profit. But this is happening – this is the ‘long-term economic plan for the next generation’.

Not only are kids a cash cow but George wants to abolish the 3:30 bell as it’s “Victorian”. But what’s the real reason? If you keep parents in work for longer does it make the tax take higher? Too cynical?

Well… no. Goldman Sachs suggested that the Japanese should get more women back into the workplace to increase demand. They say that raising female labour participation to the level of men’s could add 8m people to Japan’s shrinking workforce increasing GDP by 15%. More women working would increase the tax take. If you work teachers harder, keep parents in work for the extra three hours a day (15 hours a week multiplied 39 weeks a year equals 585 extra working hours a year) does the volume of taxable wages in the system go up? Just a bit.

But what has Japan got to do with it? Like Japan, the UK has a deflation and ageing problem. Those lucky Baby Boomers are retiring and becoming dependent, real estate values are unsustainable and UK private debt is staggering. Starting to see the rationale?

All Scandinavian education gets branded as excellent but this is not the case.  Finland’s education system is world class but Sweden’s isn’t and there is a reason: privatisation.

One of the main operators of Swedish education services – JB Education – owned by private equity company Axel – went bust in June 2013 leaving around 10,000 students without a school. In the words of the Swedish education minister, Jan Bjorklund: ‘We had a venture capital company that didn’t know much about education taking over Swedish schools… They thought they were going to make big money, discovered it wasn’t easy, got tired quickly and quit.’

This model is coming to the UK. The disability cuts outlined in the budget were a total distraction – they were never going to go though. They are now diverting attention from the wholesale privatisation of education.

You have to ask would any right thinking parent put their child into Tory sponsored hands?

Predictably Osborne has retreated on the disability cuts but he will still try to usher through the commoditisation of schools. The private sector operators will move in to ‘deliver excellent education product’. They will then learn that teachers and pupils and parents are not just digits on Excel spreadsheets.  Ironically this is where they will learn how fiendishly difficult it is to deliver excellent education.

When the rents have been taken and the profits safely off-shored, the private equity and venture capital types will dump the looted education system back on government books. 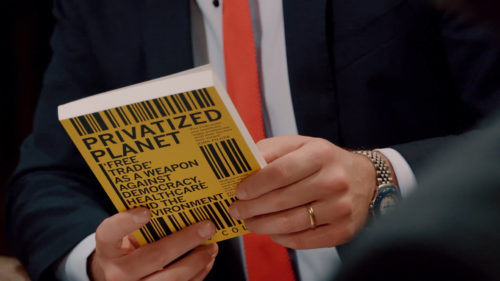