In Change We Trust

As the lifespan of every company shortens, paying lip service to change is dangerous and following the herd can be fatal.

I’ve recently been working with a few mature established companies on how to survive and thrive in an age of digitally-driven disruption and I’m struck by how often the initial response is that the “disruptive-age” sounds a bit far off in the future.

The fact that people tend to be more focused on the short-term doesn’t come as a surprise but what is worth taking a moment to think about is what short and long term means to people in terms of timescale (at how many weeks/months/years does short become long) as it might need a bit of a recalibration in light of how fast things seem to move nowadays.

For a rather visceral clue to how the “long term” has changed, we can look at the average life-expectancy of a company listed on the S&P 500; it has decreased from 61 years in the 1960s to just 13 years today.

In other words, six years of a company’s life in old money is worth about a year in today’s money: A company’s life can now be measured in dog years.

(And this trend is likely to accelerate: it has been widely speculated that by 2020, more than three-quarters of the S&P 500 will be made up of companies that we haven’t yet heard of.)

With this information in hand, surely that makes a compelling case for the board of any incumbent business to abandon policies of driving efficiencies from their current business and begin to invest heavily in the people and processes that could lead them to deliver the innovation they’ll need to extend their company’s life?

Well no, the opposite appears to be true as the financial markets (that keep the shareholders happy) are in denial about the shifting sands upon which the majority of their listed companies sit.

Using the Schiller P/E ratio (the ten year Price/Earning measure that takes into account business cycles) the average price of the S&P’s is around 27, which means the markets feel these companies have got some of their best years ahead of them.  This is despite knowing that there’s a very high probability that the majority of those business will be gone in the next eight years. Barmy.

Why, you may ask?  Simplistically, it’s because no investor wants to go out on a limb and short a market over the long-term.  Why would they risk it?  If their timing is out by a few weeks, and odds are it will be, they’ll get fired. Instead, it’s best to wait until the entire market starts to shift and then move with the herd. (see report by Renegade Inc When the Herd Turns).

As the behavioural economist Richard Thaler wryly notes, “Worldly wisdom teaches us that it is better for reputation to fail conventionally then to succeed unconventionally.”

With this denial of impending disruption on the epic scale of financial markets, it makes sense that at a company board level, there will be well backed-up resistance to rewriting business models until the moment the market has turned against them. Right?

Well, no. Not necessarily.

As anyone who has tried to get their heads around why people believe in the Efficient Market Hypothesis will understand, the financial markets are a very silly place indeed, far, far removed from the people and customers that make up the value upon which it’s built. Companies however have the gift of proximity to those same people and customers.

As companies develop the means to become better connected to customers, they’ll see that the only thing long-term for them, is constant change. 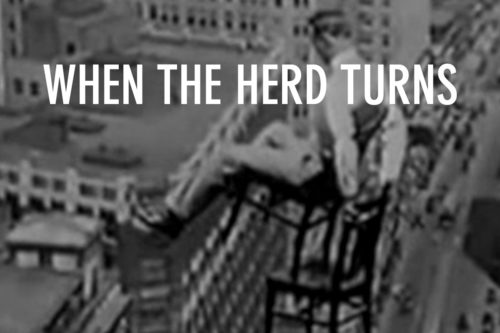 When the Herd Turns