Is the ‘Novichok’ story the UKs latest WMD scam?

All inept and incompetent governments throughout history have seemingly been guided in their foreign policy approaches by the famous aphorism: “War is the continuation of politics by other means”.

Indeed, it is a mark of the insanity of the current Conservative government that Theresa May has chosen belligerence and confrontation over diplomacy with Russia in response to the poisoning of the Russian-cum-British spy, Sergei Skripal and his daughter with a nerve agent in the city of Salisbury where they lived.

With the kind of post-imperial arrogance befitting of a nation state that lacks an independent foreign policy, Theresa May demanded that Russia explain the deaths of Mr Skripal and his daughter to her satisfaction. But amid all of the media hyperbole over the last week, what the corporate media omitted to report to the public was the fact that under the terms of the Chemical Weapons Convention (CWC) to which the UK is a signatory, the UK government was obliged to provide Russia with a sample of the nerve agent used, along with all related evidence uncovered in the course of the investigation.

Why wasn’t this widely reported in the mainstream corporate media?

What also went largely unreported, was the fact that the treaty allows Russia 10 days to respond. Theresa May provided no evidence regarding Russia’s alleged culpability and instead decided to ignore the terms of the treaty by insisting that the deadline for Putin be reduced to 24 hours.

When Russia formally requested that the UK submit a sample of its evidence to the Organisation for the Prevention of Chemical Weapons (OPCW), May refused the request. Why? The only logical reason that can be deduced, is that no evidence exists.

Suspicions that the UK’s role in the crisis is not that of the honest broker were further heightened after it was revealed that on March 14, the country blocked a Russia-drafted UN Security Council statement calling for an urgent inquiry into the incident. May claimed that the nerve agent used to kill Mr Skripal and his daughter was Novichok, developed in the USSR. Naturally, in order to determine its identity, the UK experts would have had a sample of it. Since neither the USSR, nor Russia, have ever been known to export Novichok, it can reasonably be assumed that it was synthesized by scientists working at the UK’s only chemical weapons facility at Porton Down.

Compared with the histrionics of May and the establishment mass media, the leader of the opposition, Jeremy Corbyn, has been far more circumspect and rational in his approach to the issue. There is a very good reason for this.

Barely mentioned in the press was the fact that nearly seven months ago, Russia had destroyed all of its stockpiles of chemical weapons.

The Director-General of the OPCW, Ambassador Ahmet Üzümcü, stated:

“The completion of the verified destruction of Russia’s chemical weapons programme is a major milestone in the achievement of the goals of the Chemical Weapons Convention. I congratulate Russia and I commend all of their experts who were involved for their professionalism and dedication.” Former UK diplomat Craig Murray points out with reference to the contents published in a prestigious scientific journal by Dr Robin Black, Head of the facilities Detection Laboratory, that the evidence for the existence of Novichoks was scant and their composition unknown. As such “the UKgovernment has absolutely no ‘fingerprint’ information such as impurities that can safely attribute this substance to Russia.”

But even if there was evidence of a compound corresponding to a “Novichok”, it doesn’t necessarily follow that Russia was responsible for manufacturing the compound, since no Russian sample can be compared to it. In other words, May’s assertion that the Russian’s killed the Skripal’s on the basis that ‘Novichoks’ can only be made in certain military installations is demonstrably false.   Craig Murray cited the testimony of ex-Soviet scientist, Vil S Mizayanov who alludes to the fact that the chemical compound, whilst developed by Russia, can theoretically be made anywhere. Substantiating his case, Murray noted that Iran succeeded in synthesising a number of Novichoks in full cooperation with the OPCW. As the former diplomat argued:   “This makes complete nonsense of the Theresa May’s ‘of a type developed by Russia’ line, used to parliament and the UN Security Council. This explains why Porton Down have refused to cave into governmental pressure to say the nerve agent was Russian. If Iran can make a novichok, so can a significant number of states.”

There are other issues to the story that don’t add up, one of which is motive. The first thing any credible criminal investigator would examine in a case like this is who gains the most from this course of events?

There is no discernable rationale in which it could be reasonably argued that Russia has anything to gain by killing somebody they could have killed many years previously in far less complicated circumstances.

On the other hand, with their portrayal of Jeremy Corbyn, as a ‘traitor’ and ‘Kremlin stooge’ after he insisted that May adhere to evidence-based decision-making and that her government abide by their international obligations, the Tories and the establishment media potentially have much more, politically, to gain from the tragedy in the domestic sense.

The deaths also provide a distraction from their failed social and economic policies, dirty financial dealings with Russian oligarchs and, as the Falklands shows, there’s nothing quite like the jingoistic threat of war to engender popular public support. Further, with Russia having gained the geo-strategic upper hand in Syria, any attacks on Putin serve the interests of the UK and its allies, internationally.

Mossad/CIA/M15 or was the story fiction?

A significant Middle East ally and regional player is, of course, Israel which has major undeclared stocks of chemical weapons but has refused to ratify the CWC. It is perfectly reasonable under these circumstances to point the finger for the poisoning of Mr Skripal and his daughter at either Mossad, the CIA or M15.

Interestingly, Igor Nikulin, a former chemical weapons adviser to the UN secretary general, claims the U.S and possibly the UK are behind the Salisbury attack and adds that Russia have never possessed the chemical used.

The final possibility is that the UK government concocted the entire nerve agent poisoning scenario. It should be noted that there have been no other reports of victims of Novichok poisoning in the vicinity of Salisbury on or around the date of the alleged incident, nor of testimonies from survivors. According to the Times, 40 people needed treatment after the Salisbury poisoning – a claim contradicted by the Consultant in emergency medicine, from Salisbury NHS Trust.

It’s also worth highlighting that in a November 2017 episode of the UK-US drama series, Strike Back, a Russian scientist used Novichok to kill his colleagues. Security analyst, Charles Shoebridge remarked that for 20 years up until this point, almost nobody had heard of Novichok. Coincidence? Perhaps, but which most UK media have avoided any mention of.

In considering all of the above, and the fact that UK intelligence faked the claim that Saddam could strike Britain within 45 minutes, a healthy level of scepticism is required over the latest claims of the UK government. 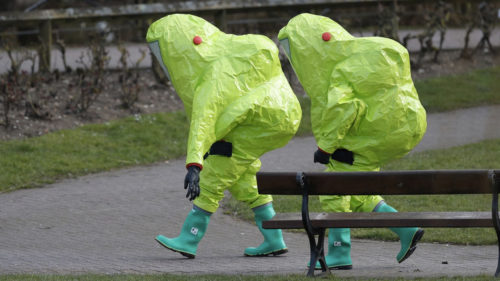 Amesbury Poisonings: All Conclusions & No Evidence