A war criminal in the White House

If you’re looking for clues to the direction of future US foreign policy, one need only look at the White House visitors list to understand the truth of Trump’s claim that America is ‘not nation-building again’. If that really was the case, what is he doing taking a meeting with one of the world’s most infamous nation-builders and accused war criminals, Henry Kissinger?

The US “will hit that fork in the road, and the temptation to deal with it with a pre-emptive attack” against North Korea “is strong, and the argument is rational,” Kissinger told members of the Senate Armed Services Committee this week.

And he would know. Almost every foreign policy crisis over the last 50 years, from the arms race in the Middle East, to the politicising of radical Islam, and the continuing escalation of the Cold War can be traced back to Henry Kissinger who served as the US Secretary of State and National Security Advisor to Presidents Richard Nixon and Gerald Ford.

Kissinger: An architect of disaster capitalism

He was central to the 1973 Chilean coup that saw the overthrow and assassination of President Salvador Allende and the installation of fascist dictator, Augusto Pinochet. More than 40,000 civilians were killed, ‘disappeared’ or arrested and imprisoned as enemies of the state between 1973-1990. All while the economy spiralled into recession, forcing 45% of the population below the poverty line, while profits flowed to US multinationals like ITT & Anaconda Cooper.

Having condoned West Pakistan’s invasion of East Pakistan (now Bangladesh), Kissinger and Nixon extended military aid and resources to Pakistan’s Inter Service Intelligence agency, deliberately encouraging the politicising of radical Islam to destabilise Afghanistan. The ‘selective genocide’ left more than one million Pakistanis dead, thousands of women raped and millions of displaced civilians were forced to flee to India. Nixon even compared the slaughter to the Holocaust, but as documented in Greg Grandin’s ‘Kissinger’s Shadow’, the National Security Advisor and Secretary of State told the President not to worry, it was a price worth paying to appease China, an irony, considering Kissinger has been known to accuse his critics of anti-semitism (13 of his relatives died in Hitler’s concentration camps).

So much for ‘never again’.

Kissinger is estimated to be responsible for at least four million deaths worldwide, though that estimate is low, considering his involvement in the proxy war against Soviet allies in Southern Africa. Under Kissinger’s instruction, the US expanded arms sales to white supremacist countries of South Africa and Rhodesia while conducting covert operations via the CIA, sabotaging liberation movements in Angola, arming mercenaries and apartheid forces. Kissinger’s civil war is estimated to have cost more than 5.3 million people their lives between 1961-2002.

John Stockwell, CIA agent in charge of operations during the early stages of the civil war testified before Congress that “there was close collaboration and encouragement between the CIA and the South Africans,” though it was done “without any memos being written at CIA headquarters saying ‘Let’s coordinate with the South Africans’.” Kissinger and the CIA director were in charge of operations, he testified.

Asia: The next front of the new Cold War

Well, now the accused murderer, kidnapper and war-criminal who walks freely in the White House has his eye on Asia as a new lucrative target for destabilisation.

Kissinger told the committee that he’d be concerned by any “unilateral American war at the borders of China and Russia”, that did not have support from “significant parts of the world, or at least the Asian world”.

He predicted a new nuclear proliferation across Asia, claiming South Korea would no longer accept being the only Korea without nuclear capabilities. “Japan will follow suit,” he said, suggesting America would have to rethink its position on nuclear disarmament, particularly when glowing new export opportunities await.

One need only look to one of the countless regions Kissinger was responsible for upending in America’s pursuit of profit to understand the dangerous direction this Cold War is headed.

So long as people like Kissinger and those who have aided and abetted his crimes over the last half century go unpunished, the world will continue to be gripped by financially motivated crimes masquerading as democratic intervention.

Kissinger should be at the Hague. Not the White House. 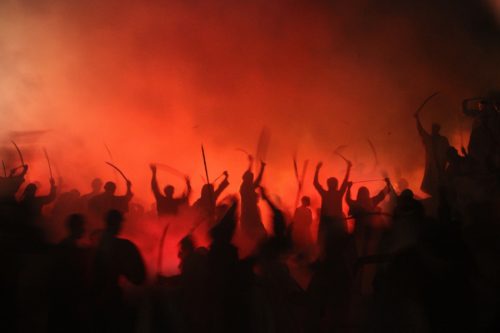