Why I won’t be on ‘Daily Politics’ again

On Monday morning, I received an email at half past eight from the BBC asking if I would come on ‘Daily Politics’ to ‘chat about how Stand up for Labour tour makes politics more accessible and what these events can bring to political parties’.

I decided to consult my friends on Facebook to find out what they thought and the overwhelming response was that I should take up the opportunity to appear on the programme. So I replied to the BBC to say that I would be there.

I arrived at the studio in good time. The studio and its associated office took up the whole floor of a big building near the Houses of Parliament. I reckon there must be at least 50 staff working on the programme. The money and resources that the programme has at its disposal is mind blowing.

It’s such a shame that with all its financial backing from the BBC, this programme dedicated to politics does very little to make political activity seem attractive or accessible. Its agenda is so Westminster focused that it seems to imply that all politics happens there.

I found out that the promise of a discussion about how Stand up for Labour can make politics more accessible was nothing of the sort.

When I saw the board outside the studio, I found that the title of the short spot on the show in which I would be featured was called ‘Jez Festival’. This was clearly a reference to a music festival that the Labour Party were gingerly suggesting may happen in June in North London. The ‘Jez’ bit was an attempt to make it seem like a celebration of a personality cult, whereas the Labour Party press release was talking of something called ‘Labour Live’.

So the ‘Stand up for Labour’ had made a press release about a possible music festival for Labour that would engage people through a mix of music and speeches into a personality cult story and it was in their ‘fun’ slot at the end.

I was rushed into the room just before the last segment of the show and the presenter, Jo Coburn, asked me: ‘What is the aim of this festival?’

I was a bit dumbstruck.

‘I don’t know anything about this festival’, I had to reply. I then tried to make light of this by saying that ‘this must be another BBC blunder’.

While Coburn tried to laugh this off, it was actually true.

I felt for her so I tried to add something about who I am and then to drop in a plug for Stand up for Labour (as my brother had advised), but this interview was moving away from me.

Coburn never seemed to listen to anything I was saying and always seemed to be on the point of cutting me off. She even started asking the Tory MP on the show what he thought about Labour Party festivals.

At the end of the show, as I went to leave she said: ‘see you soon’ and then turned to me and said ‘I don’t mean you. I won’t be seeing you again’.

I found that a bit unfair as I had only gone to the studio to talk about Stand up for Labour so it could hardly be my fault that I didn’t know anything about the festival.

Stand up for Labour travels all over the country with the aim of energising people who support the Labour Party, promoting political activity and a sense of community. On the other hand, ‘Daily Politics’ is firmly based in Westminster and promotes division between political parties and within political parties; makes politics seem cliquey and often misrepresents good ideas in order to suit its – frankly, very negative – agenda.

Rather like Clark Gable (or really more like a child trying to cuss back), I turned to Coburn and said: ‘And I’m glad I won’t be seeing you again.’ 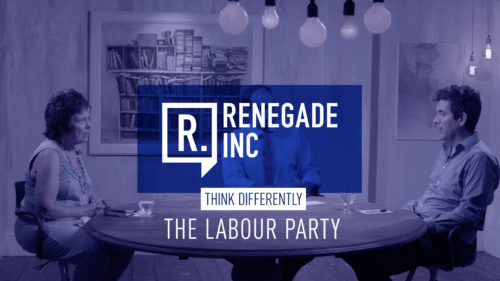