During the last 18 months, Wikileaks publisher Julian Assange has been locked up in solitary confinement in Belmarsh Prison. On Friday, December 11, at Westminster Magistrates Court, Assange faced his last hearing before an historic extradition decision scheduled for January 4, 2021 at The Old Bailey will determine his fate. Having forensically followed the Assange case, journalist, Taylor Hudak, is authoritatively qualified to comment on the conditions Julian is experiencing in the UKs equivalent of Guantanamo Bay.

Housing some of the UKs most notorious and violent offenders, the journalist notes that the prison wing in which the publisher is being held has been put on lock down as a result of a Covid-19 outbreak. This has meant that Assange is subject to additional harsh restrictions that include him being held in his cell for over 23 hours a day without access to a shower or outside exercise.

Hudak states that not only is Assange a psychological torture victim (confirmed by the testimony of two medical experts in the presence of the UN’s Special Rapporteur on Torture, Nils Melzer), but due to the fact that he has existing respiratory issues, he is particularly vulnerable from any potential Covid-19 infection.

Beyond the technical aspects of the case, Hudak is clear that the persecution of Assange is politically motivated:

The journalist notes that while testifying in the hearing, US prosecuting attorney, Gordon Kromberg, stated that if extradited, Assange would likely be subjected to restrictions known as Special Administrative Measures (SAMs) on the spurious grounds that the US establishment regard the case to be a potential risk to national security. This punitive measure will hinder the ability of Assange’s legal team to accurately and adequately prepare his case. 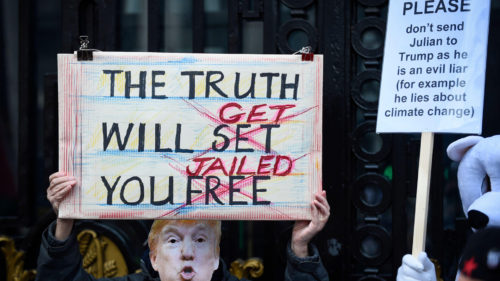 Under these circumstances, the WikiLeaks founder will not be able to select whichever legal team he wants. Rather, Assange will only be granted access to a US establishment approved attorney who has been subjected to the requisite security clearance and is therefore somebody who is part of the same system that is prosecuting him.

“What’s really alarming about these SAMs measures is that it is stated that if extradited, Assange will be under these restrictions during pre-trial, which means that his attorney would also be subjected to these restrictions. And it has been stated in the past that many attorneys will air on the side of caution, self censor and withhold certain pieces of evidence in fear of being prosecuted under violation of the SAMs measures”, says Hudak.

The journalist adds that if extradition to the US is granted, Assange will likely be placed in isolation at Alexandria Detention Center under protective custody inside a 15 metre square cell with little access to natural light or fresh air. In addition, he would only be allowed one (monitored) 15 minute conversation a month with family. Hudak says that there are no doctors on site and no guarantee that Assange would be granted access to the prisons mental health wing.

These circumstances are so disturbing that the United States government, which demonstrably does not value free speech, can no longer legitimately take the moral high ground when criticising the actions of a traditional authoritarian regime like China. Geopolitically, other governments throughout the world are looking closely at what the US and UK are doing.

Hudak doesn’t discount the possibility of an outgoing Donald Trump issuing a pre-emptive pardon to Assange for his ongoing issues with the Deep State, in particular the Democratic establishment and their attempts at undermining his presidency, and predicts that more people within the US government and mainstream press will speak out in support of Assange as the persecution against him intensifies.

The journalist emphasizes how important the Assange case is in terms of the public’s right to know about war crimes committed by governments’ in their name and argues that the criminalization of ‘uncomfortable’ truths has wider political ramifications that undermine the ability of the public to successfully fight for meaningful causes.

Hudak argues that one way the establishment is likely to relent to pressure in the Assange case is if the public, in large numbers, avail themselves of the various campaigns. The London-based, Don’t Extradite Assange campaign is a particularly useful resource in this regard.

In the professional sphere, hundreds of doctors throughout the world have come together under the Doctors for Assange umbrella to publicly advocate for Assange from a medical standpoint. The group wrote a letter to the UK government condemning the torture and treatment of Assange. It was at this point that Dr. William Hogan joined the organization.

Hogan reiterates Hudak’s account that Assange is suffering from what amounts to psychological torture and concurs with the journalist that this factor, combined with his chronic physical illness, makes him extremely susceptible to additional illness, especially infectious diseases.

Hogan says that being condemned to a cell for almost 24 hours a day with no opportunity for physical exercise, does terrible things to the human body:

“It starts with the psychological stressors which causes a release of stress hormones, adrenaline and epinephrine. And being in a constant state of fright or flight status continues to cause inflammation and destruction of organs and tissues in the body and that weakens the immune system”, says the Biomedical Informatics professor.

“The psychiatrist at Belmarsh purposefully omitted the fact that Julian had a razor blade as a possible suicide risk from her reports. It’s absolute malpractice to leave that fact out. I don’t know how she can call herself a physician or compassionate in any way”, says Hogan.

From a psychological perspective, fellow Doctors for Assange group member and psychiatrist, Professor Thomas Schulze, is ideally placed to comment on Assange’s emotional state while solitary confined inside Belmarsh.

Schulze describes the impact Julian’s total sense of abandonment is likely having on his mental well being:

“Lack of sleep, depression, anxiety, auditory hallucinations, suicidal thoughts, high risk of suicide. So it’s a constant feeling of being left alone. Everybody knows what happens if you are in solitary confinement and then have this sword of Damocles hanging over your head, being extradited to the US where they want to send you to a supermax prison for 50 years. So, from a psychological, psychiatric point of view, this is a horrible pressure that he is under. And that leads to all sorts of psychological symptoms”, says Schulze.

The intention of the establishment is to strip Assange of his humanity so as to limit the amount of public empathy towards him. Schulze suggests that the media and political establishments’ perpetuation of the rebellious hero/establishment villain dichotomy, within the public mindset, is integral to this process:

“There is the hero of the free press and then there was the evil guy who actually abused his status of heroism and did atrocious things. So this is where we are. Through the work Doctors for Assange and other organizations are doing, the hope is that we can bring the public to a more balanced viewpoint and focus on the human being. The fact that he is a father is also taken out of the equation all the time”, says Schulze.