Before we can build a brave new world, we have to acknowledge the depth of the current crisis.

It’s tempting to trace today’s problems back to the financial meltdown of 2008, but that was the final act in a drawn-out drama of decline. The world was in bad shape long before 2008.

If we can identify the root causes of the collapse of historical civilizations, and then find ways to break the cycle, progress will be possible. It isn’t a question of returning to some far-off golden age when all was well – no such time ever existed. Nor should we kid ourselves that we are a few short steps from Utopia. Our brave new world will remain a work in progress. Human beings are too complicated, and society too complex, for us quickly to reform our way to a world where all is peace and harmony. But we can start to identify the obstacles to progress and work to dismantle them.

“We can buck the trend of history. We can set out on a different path. But first we need to get real about the catastrophe unfolding around us.”

But, in order to create a tidal wave of change, these millions of tiny droplets need to combine into the biggest tsunami imaginable: a thunderous, rolling force for change that gathers momentum until it is able to sweep all before it. Despite the complexity of the human psyche, and the tensions that arise when seven billion people try to live side by side on a planet unused to such numbers, we do have the ability to turn things around.

The sharing of knowledge and wisdom has never been easier. Thanks to the internet, and the new possibilities for organization it offers, we have never been in a better position to make change happen. 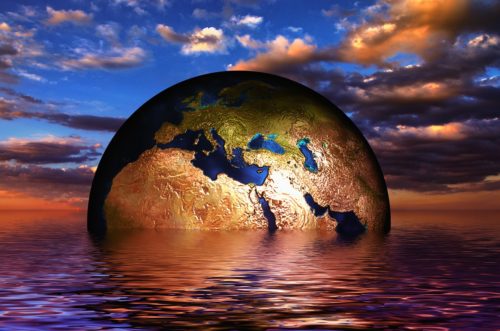 We hear much about apathy. People can no longer be bothered to stand up and be counted. Even if they believe in the possibility of improvement, they can’t see how it can be achieved. There are many people with this defeatist attitude, but there are also millions who are strongly committed to the idea of change and prepared to work for it. Some are politically involved, at all points across the political spectrum. Others, having come to the conclusion that conventional politics is not fit for the purpose of reinventing society, are pursuing change in other ways. Some are motivated by religious or spiritual beliefs, others yearn to escape humdrum jobs from which they draw little satisfaction. Millions are appalled by the increasing superficiality of consumer culture and the media-led obsession with celebrity. If so many already desire change – despite political and media efforts to keep people compliant – then we are off to a great start.

That change must start with the economy, especially our dysfunctional system of banking and finance. Economic participation is a basic human right, and a responsibility we all share.

Given the critical role of the economy in all our lives, it’s to everyone’s advantage to learn a little more about how, in economic terms, the world really works.

We humans have lived our lives in evolving economic systems since we came down from the trees. Trade and commerce are part of our cultural DNA. The hardware of people and planet has remained fairly constant over time, but the software we use to distribute economic opportunity is in desperate need of an upgrade. If you’re still unsure about whether you’re up for the fight, the next chapter reveals how the economy has been hijacked by minority vested interests. This alone should persuade you that it’s time to engage. Economics is for everyone, and if taught properly is far from a dismal science. By acquiring a better understanding of the basics, people will be able to protect themselves against a system that has grown out of control. Once you understand how the economy works, you will be liberated from its constraints, and the motivation to work towards meaningful change will come more easily.