The goal of propaganda is a population that polices itself

Propaganda has reached its zenith when each member of the target population thinks the same; when they are afraid to think differently.

At this point ‘leadership’ may commit whatever atrocities it sees fit…in the certainty that the population will either not ‘see’ it, or will view the expression of criticism as a more heinous crime than the act being observed.

This is achieved through cementing a ‘false equivalence’ in the mind of the group. Such a false equivalence is being cemented in the UK right now – the idea that criticism of Israel’s persecution of Palestinians is an act of anti-Semitism.

Why the attacks on Jeremy Corbyn are not what they seem.

The propagandist seeks to bend the ‘group mind’.  Thoughts and actions consistent with the ‘narrative’ are deemed to be socially acceptable & politically correct…ones that challenge it are regarded as socially UN-acceptable & politically IN-correct. Overtime this is reinforced through a dynamic that exists within every human grouping, and many species of mammal – fear of disapproval. Ergo, the propagandist is employing a form of ‘crowd control’.

When the fear of disapproval becomes so strong that one’s sense of belonging, or even physical survival, depend on adherence to the narrative…when failure to comply with it attracts immediate rebuke from other members of the group…then the population can be said to be policing itself. That is how ‘cults’ function, and more frequently than you might imagine…it’s how intelligence agencies and other governmental figures attempt to work through the media.

This is what Orwell warned of in the dystopia of ‘1984’.  The Party had achieved what we might call a ‘maintenance state’ for the narrative – society was policing itself. For example, in Oceania, children were taught to report their parents to the ‘Thought Police’ if they demonstrated any sign of disloyalty to The Party. Disloyalty was considered a ‘thought crime’:

“Actions are held to be good or bad, not on their own merits, but according to who does them. There is almost no kind of outrage – torture, imprisonment without trial, assassination, the bombing of civilians – which does not change its moral colour when it is committed by ‘our’ side. The nationalist not only does not disapprove of atrocities committed by his own side, he has a remarkable capacity for not even hearing about them”   George Orwell, ‘1984’

This process is happening now.  The false equivalence of ‘criticism of Israel’ with ‘anti-Semitism’ is being inculcated into society in general, into the Labour Party in particular, and in its sharpest manifestation, into the smear campaign against Jeremy Corbyn.

As you will already be aware (unless you’ve been trapped behind the fridge for several weeks) Corbyn is the target of a virulent campaign from a number of different directions, which have made ‘common cause’ on the accusation of anti-Semitism. Here, for example, are three major Jewish Newspapers, competitors of each other, who made the extraordinary decision to agree a common headline and verdict on ‘Corbyn’s Labour Party’:

And here is the Jewish Chronicle after Margaret Hodges attacked Corbyn in public with ‘you’re a fucking racist and anti-Semite’:

The mainstream media has not missed any opportunity to bash Corbyn either. Here’s a relatively mild headline from the Sun, who selected a comment from one of Corbyn’s backbenchers, Wes Streeting:

And to demonstrate that upmarket & downmarket means little when it comes to this stuff, here’s a hysterical comment from the usually ‘sober’ Telegraph:

What you will probably NOT have seen, however, is coverage of a statement published by 650 members of the Jewish Community, who are passionately opposed to the narrative. Here is the statement from ‘Independent Jewish Voices’ whose aim is ‘human rights and a just and peaceful solution’:

Neither is it likely that you will have heard the following statement from a Jewish academic, a person I’ve never met, but one who strikes me as a thoroughly intelligent and compassionate human being, Professor Annabelle Sreberney:

At this point, let me spell out my personal opinion regarding Jeremy Corbyn’s alleged anti-Semitism:

You have to be a propagandist, an opportunist, or a complete idiot to discount decades of evidence demonstrating that Jeremy Corbyn is an enemy of racism. Wake up and smell the coffee – the guy stands up for the underdog…racists, by stark contrast, are always bullies

The reality I perceive, is not that Corbyn hates Jews, or loves Arabs…it’s that he challenges injustice where he sees it – and he sees it in the treatment that Palestinians receive from the State of Israel.

The Propagandists in this situation must ‘redirect’ the attention of the population to the ‘false equivalence’: Criticism of Israel = Anti-Semitism.

The Opportunists in the equation are many:

As for the Complete Idiots…sadly ‘careful thought’ is about as popular as ‘listening’, and to be fair to younger folk & millennials, this has been the case for the six decades I’ve been observing my fellow ‘talking monkeys’. In short, propaganda relies on people ‘not thinking’ – there’s a lot of it about.

Now, let’s look at some ‘nitty gritty’ – the everyday stuff. This isn’t something that only happens in the newspapers – it’s a real part of everyday thinking and discourse. Here is an example I encountered a few days ago, which will serve to illustrate the process:

A Labour supporter on Twitter made an accurate observation that the BBC’s coverage of Jeremy Corbyn is so biased that it’s painful to listen to. I will keep his identity confidential since I have no desire to embarrass him – my purpose is to demonstrate ‘false equivalence’ in action.

Secondly, I should add that the Israeli Embassy has a fearsome reputation amongst journalists for making its feelings known if Israel doesn’t get the coverage it feels it deserves. This is no secret…and it’s not new. Here is Tim Llewellyn, former Middle East correspondent for the BBC, writing in The Observer in June 2004:

“The reasons for this tentative, unbalanced attitude to the central Middle East story are powerful. BBC news management is by turns schmoozed and pestered by the Israeli embassy. The pressure by this hyperactive, skilful mission and by Israel’s many influential and well organised friends is unremitting and productive, especially now that accusations of anti-Semitism can be so wildly deployed

And here is a clip from a suppressed Al-Jazeera film, showing Israeli Embassy staff advising Labour activists about how to discredit MPs who support an end to the abuse of Palestinians:

Will the Media ever accept Corbyn as the leader of Lab Party, No! Listen to Justin Webb’s Masterclass in unconscious bias, in a short interview with John McDonnell he trundled out every Anti Corbyn narrative and the newest or oldest That Corbyn is like Trump

When ‘journalists’ at BBC interview Jeremy Corbyn, they repeat what they hear in the echo chamber of Whitehall, itself an echo of the fears of corps, banks & other ‘lobbyists’…but the thing that scares the veritable ‘crap’ out of the BBC is a call from the Israeli Embassy

You know that sounds like Paranoia and to my ears Anti-Semitic. If we are going to convince the media to give us a fair crack of the whip and balance reporting we need to be careful in our use of language

‘To your ears’. There is no anti-Semitism in my tweet whatsoever. Don’t buy the conflation between criticism of Israeli government policy and anti-Semitism, or if you do, don’t try to pin it onto me. There’s none here.

As expected, he did not reply.

So here is a guy who is so scared of being seen as anti-Semitic he does the following, albeit probably unconsciously

There is no way that Jeremy Corbyn or the Labour Party will ever get a ‘fair crack of the whip’ on this issue. The narrative requires that Corbyn’s support for Palestinians goes away…if you are entertaining the possibility that there is any place for ‘rational argument’ or ‘objective reporting’ from or with the people driving this narrative…you are deluding yourself. This is Propaganda…this is how it’s supposed to work

And it is working…have you noticed how the media is utterly obsessed with talking about Corbyn’s ‘anti-Semitism’…at the expense of the underlying issue he calls attention to – Israel’s abuse of the Palestinian people?

What then, is a person to do?

The solution to this is not quick, and it’s not easy.  However, one action that any human being can take, is to stay alert to the meaning of words and how they are structured. If the communication is verbal, also to the body language and vocal tonalities. Pay attention to what is really being said…and also notice what is not being said or skirted around…and refuse to sacrifice your truth for an easier life. Do not let the false equivalence stand. As Gandalf said to the Balrog on the bridge at Khazad Dum…“You shall not pass”.

Propaganda is a thought virus. Speaking your truth is the antidote. Here is the antidote in action – the splendid Dr Norman Finkelstein, giving an impassioned reply to an audience intent on using ’emotional blackmail’ to shut him up:

Here is my personal response to this thought virus, and to anyone who tries to infect me with it:

I don’t care if you worship in a synagogue, a church, a temple, or a mosque. I don’t care if you’re black, white, yellow, brown or green. I don’t give a monkey’s what you eat for dinner & I don’t care who you sleep with…provided it’s a consenting adult. I cannot abide bullies, liars and sociopaths. Benjamin Netanyahu and the current government of Israel are war criminals…& your guilt-trip won’t work on me.

Finally, to those who are having thoughts like ‘this is all a misunderstanding’ or ‘common sense will prevail’, or ’a few concessions is enough to fix this’…it isn’t, it won’t, & it never will be…that isn’t how this works.

You cannot appease a smear campaign. 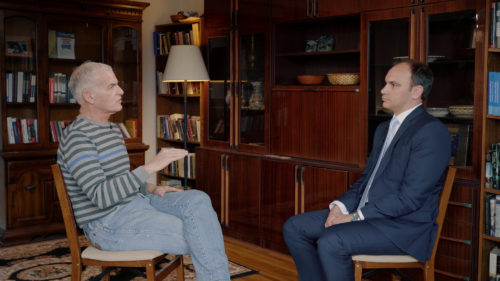