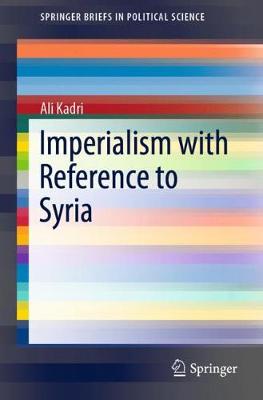 The more we hear about Syria, the less we understand. The mixed messages that come from the media seem only to add more confusion. Having been hoodwinked into wars in the Middle East before, the British people are naturally skeptical.

So beyond the headlines, what is the real geopolitical play that’s going on and why is it occurring?

We travelled to Singapore to meet Professor Ali Kadri, a Middle Eastern economist who understands the geopolitical play and who gives us an unvarnished look into what’s at stake, the forces driving the Syrian conflict, and the wider problems across the Middle East.

When people look at the official narrative in Syria, they experience a cognitive dissonance: They see governments saying one thing, certainly in the West, and what they feel intuitively is that something else is happening.

Professor Kadri says most news serves a purpose, and not the one you think. Reporting is often structured around on the interests of certain groups which are happy with the way things are going in the Middle East.

Media doesn’t bite the hand that feeds it

“They’re not going to pay people to do news if they’re going to report on something which goes against the grain, against the interest of of those with political and financial power,” he says.

“Given that war itself and the making of war is big business, for many reasons, then we see that most of the news agencies are not going to be critical interviewers. They’re going to pay people who are going to say, ‘look, you know, we have a country which can become better if we put obscurantist forces backed by the United States in power’.”

The professor says the media’s purpose in these cases is to promote war and the power of the people who have pay reporter’s wages.

“The media is not independent, unfortunately,” he says. “We’ve had not only Syria, we’ve had Libya, we’ve had Iraq, we’ve had Afghanistan, before which were distracted completely with the help of the United States, using a dissatisfaction within these countries. It is natural for any country to have a certain level of dissatisfaction with the way things are going, but one should not feed any element to make things boil over. Unless, of course, the party that is feeding this destructive process is benefiting from it.

“The war and militarism is big business. If we think about it, the whole system is based on waste. We’re wasting the planet, we’re wasting things that we’ve invested so much in. We’re wasting people, which is the saddest, most tragic thing.”

Prepping for a permanent war

Because of what happened in Iraq, Afghanistan and Libya, people have become a lot more skeptical, along with the advent of social media and alternative views aired on sites like Twitter and Facebook.

To those people, Professor Kadri says they must understand that what is going on in Syria is no different than what happened in Iraq and Libya.

“It is an effort to basically destroy the country,” he says. “Destroy the social formation. Create many countries within a country.

What is occurring in Syria is a classic case of divide and conquer.

“But it’s worse than the previous divide and conquer of the early 20th century,” he says. “Because we have had many competing forces on a global scale, they’ve needed bases in those faraway countries, to basically be weary and prepared against one another, because these forces, they fought each other in Europe. They fought two big World Wars which cost the planet something like 500 million people, or something of this nature.

“So what we’ve seen then, these different powers were poised against each other, and they might even have delivered a certain stability in the way they were poised against each other. In some areas where like in Syria, there was a mandate, but the mandate did not go overboard in the slaughter of the population as we are seeing now. Now we have devastation on a scale unheard of before. We’ve had an Iraqi devastation on the scale unheard of before. Afghanistan, Libya, Yemen.

“Yemen is a very severe case of malnutrition and reduction in life expectancy and a case of war that’s not going to end at all.”

The cost of sovereignty

Professor Kadri says that when we think about countries like Afghanistan, Iraq, Libya, Yemen and Syria, they tell us that there is something internal about them that made them that way.

A lot of these countries invaded by the Western allies were pushovers. Saddam Hussein didn’t really put up much of a fight. Afghanistan’s been an ongoing graveyard of empires but again, no huge enemy there. In Libya, Gaddafi fell over very quickly. The difference with Syria is that there is another aspect to it, which is the rise of Russia and China which means that we now are going to have some significant pushback against Western forces, which significantly changes the tune of this intervention.

“What’s happened in Syria is reminiscent of something that happened pre First World War.

“You have super powers poised against each other that cannot actually go to war with each other without taking the planet with them. The planet is going anyway, with the type of production mechanisms and the type of social relations we use to produce things, the planet will go anyway, but they will take it.”

Nuclear holocaust and dollarizing the world

They professor says the Western powers are accelerating the process through which the world will once again confront the possibility of a nuclear holocaust, exactly because no one wants to or can afford for that to happen.

“Because new powers are emerging, especially the Chinese who are owning property in a world that is de-facto owned by the United States,” he says.

“The US dollarizes the world, denominating the assets of the world in its own currency. It practically owns the world, and in order to continue to do this, it must de-sovereignize nations.

“It must take away the power of nations to say ‘this is what we want to do with our resources, and this is how we do it with our own currency’.

“Creating a level of instability, and controlling the people in charge of nations is always part of the mix that they use to do things.”

The professor says the rise of China and the restructuring of Russia is a bonus not only for Syria, it places developing nations around the world at an advantage.

“They have more free space in which to breath,” he says. “They can have a loan, not from the IMF, but from China, for instance, which involves infrastructural work, badly needed water infrastructure or electric compressors.”

These developing nations have less reliance on the west now. What Western reliance did is provide the loans that actually emaciates the power of these nations. It takes away their right to own, to control, and to allocate the wealth that they have, the resources that they have: the money, the people, the machines. Because the world is structured in such a way, that do you want to take more of the value of others for lower prices, because you are making profits. And in order to make a higher rate of profit, you need to cheapen things.”

It’s an incredibly simple calculus, isn’t it? But the further away you get from the Middle East and the simplicity of the conflict, people begin to camouflage what is actually occurring by saying things like ‘well, it’s a lot more complicated than that’. But the simple fact is, what you’re trying to do is take resources from one place, at a cost, sell them, take the profits and use them to bolster your standard of living. That has been the Western model all along.

“The unfettered profit making of the system of capitalism that we live under is going to take the planet to smithereens,” says Professor Kadri.

“Every concept that the neoclassical economists use: ‘consumer surplus’, ‘externality’, all these concepts are hullabaloo. They bamboozle. These terms are, in fact, something of a weapon against people, because is the externality really an externality?

“Because if we have a system which is built on ways which the devastation to the planet cannot be matched with any amount of money that we’ve earned or enjoyed, or any standards of living that some of us have enjoyed, can we say that we live in a system which is the best of all possible worlds?

“A cognitive dissonance arises because people are aware that we cannot continue to live like that, because the crisis is not only a political crisis, it has become an existential crisis.”

For a long time, the professor says that people working in third world development couldn’t tell people that what was occurring in the Horn of Africa, Central Africa and the Congo was fundamentally related to the global economic system. That we should end war because they are part of the waste structure, the militarism, and the value making of the world’s system.

He says the impending environmental catastrophe facing the world is a trojan horse for anyone who cares not only for their environment, but for the wellbeing of other people and for the system of social relations that we use.

“Empires impose on poor people, cutting short their lives in the meanest way possible because people are a stock of commodities” he says.

“And if we have too many apples in Europe, we basically destroy the apples. Unfortunately, capitalism produces too much and it sometimes it doesn’t use the factories, it doesn’t use people, it under-utilises resources.

“So what you have is a case of a social order that’s actually consuming people away, consuming people’s lives away. The famines, all of these things which are man made, they are no longer a force of nature. There are some that argue, ‘okay, look it’s human nature and people have died throughout all the centuries’, and things like that.

To be a historian or a social scientist is to understand social relations, how we relate to one another, in order to make the world tick.

“How we’re related with each other during the Roman Empire, is different from the way we relate to each other now,” says Professor Kadri. “We create commodities in abundance, unlike those times where we starve because of the weather. We are starving because the way we mal-distribute or ill-distribute the resources and the goods that we produce.”

Unfettered profit, the idea of growth for the sake of growth, is a sort of ideological cancer.

“What we are doing through this process is undermining the planet, and I see Syria as very much a part of that. I see the rise of China, the rise of Russia, and the intervention of Russia as some force that’s going to put the brake on this anarchic and vicious system, to put a brake on European and US aggression, which is a wolf in sheep’s clothing which says that it’s going to intervene to help Syria, for instance, or help Iraq.

“How did they help anywhere for that matter? The world would have been much better off without their help.

“I think that, specifically the rise of China, is scaring the hell out of the Western formation because it’s actually acquiring real ownership of assets. It is undermining the material fabric, the economic fabric upon which the US empire stands.”

Tune into the rest of the episode above to find out how neoliberalism is being visited on the Middle East by the west, and what can be done about it.