The Fall of the Renaissance Men

The concept of ‘Division of Labour’ has been around since 380 B.C. Ever since being mentioned in Plato’s Republic it has become a fundamental economic principle that is deemed necessary for both the construction of a state, and a way of providing basic needs and services for citizens.

At the time, Plato spoke of people who were adaptable: shoemakers, farmers, builders and weavers. The dawn of the industrial revolution changed all of that, and created more and more specialised segments of labour. Not only were an infinite amount of new roles created but with the advent of Taylorism the division between task design, and task implementation was born, and so was the field of management.

Commercial Gain the Expense of Society

Taylorism – not unlike neoliberalism – aims to achieve maximum job fragmentation to minimize skill requirements and job-learning time to makes possible payment-by-result which becomes a method of wage determination.

A frequent criticism of Fredrick Taylor’s method is that his obsession with commercial efficiency results in inefficiency within the greater society. Put simply, it allows the measureable commercial benefits to completely overshadow less quantifiable social benefits. This means that social values are neglected and left behind.

What Do You Do?

Today, developments in technology and population growth continue to create more diverse economic sectors and an exponentially growing spectrum of the divisions of labour. The ever-present question of “what do you want to be when you grow up?” is introduced early and has become a puzzle we spend the majority of our lives trying to solve.

Nothing speaks more to this than where we place ourselves on the spectrum of labour and how that is now central to our personal identities. If you were to meet someone and they were to inquire about you, what else could you use as a social moniker other than your professional occupation?

But for all the benefits brought forth by division of labour, Plato was quick to note that emphasising the acquisition of knowledge, for the sole purpose of becoming tradesmen, undermines the natural use of reason and creativity.

Today, in a financialised world – and its associated monoculture – this might seem like a laughable statement but a quick inspection of our educational systems would suggest otherwise.

University programs of study are often rated on the level of employability of the students who complete them. Even at school level, high stakes examinations are used to quickly sort out individuals based on their ability to progress to higher levels of education. This is true even in the lauded Nordic educational systems, where standardised tests are still used to help determine which students should proceed to technical schools and which will continue to universities.

The emphasis our educational systems place on employability distances them from feeding natural curiosities. This robs society and makes them just another commoditised segment of an economic system. As such, students are trained with the skills that are believed to be necessary in an economic context, and are not provided with foundational principles that bolster creativity, exploration, and critical thinking. This is even more prevalent in countries that still emphasise the ‘importance’ of rote learning.

An economically driven education system will inherently shun topics of culture, governance, civics, art, history and philosophy as these topics are not seen to contribute economic value in the traditional sense. Furthermore, it alienates people who choose to participate in these activities, and creates inadvertent barriers for those who want to access it. Poetry is shunned to café open mic nights, history and philosophy to academics and their conferences, governance to generations of politicians, and art to gentrified areas and exclusive galleries. All becoming genres of subculture, as opposed to being engrained as part of everyday life, this is commerciality feeding on society.

Aligning the educational and economic system in this way creates a fearful combination. For broader thinkers, the need for increased specialization of labour creates a deficit as they have a legitimate and helpful foothold in more than one field. This deficit has also been noticed in the realms of managerial sciences where an increase in specialisation leads to silos operating out of sync with each other within an organization. Although this can help increase the performance of one of the silos it eventually leads to a loss of performance in the organization as a whole. As such, employees with lateral networks and knowledge within an organization i.e. those with a foothold in different silos, are often regarded as the gatekeepers capable of unlocking organizational

The same is true when this rhetoric is applied to human progress. Innovators and Inventors were/are always more than one thing with one set of interests they often combine their intrigue of the humanities with sharp technical abilities and unparalleled curiosity. These renaissance men, the likes of Leonardo da Vinci, Benjamin Franklin and Nikola Tesla did not fit within one of the division of labour silos – thankfully. Actually labour was just a by-product of their natural curiosity.

This begs the question, if our society was not so keen on creating box men and women – hyper individuals that fit directly within predefined divisions of labour – how many more bridging technologies and ideas might we benefit from? How much more effective would our democracies be? Would there be renaissance?

Most importantly might we feel more fulfilled if – as individuals – we’re allowed to roam based on our curiosities and become our own renaissance men and women? Isn’t it ironic that when corporates entities want to do something new to add value the hackneyed ‘let’s think outside the box’ line becomes a leadership mantra? What would Fredrick Taylor say…? 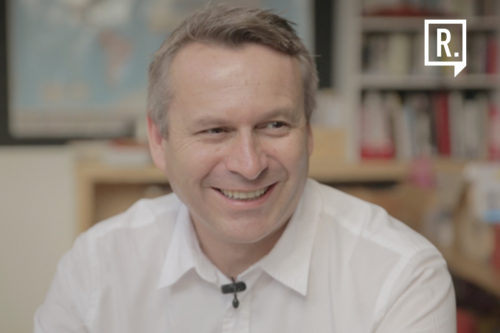