Further reading: Princes of the Yen: Japan’s Central Bankers and the Transformation of the Economy 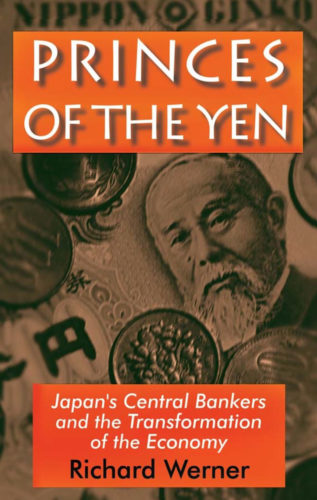 For many years, we’ve been told that finance is good and more finance is better. But it doesn’t seem everyone in the UK is sharing the benefits. On this program, we ask a very simple question – can a country suffer from a finance curse?

Are we better off today than back in the 1970s? The obvious answer would appear to be yes, after all, we have a lot more stuff now than back then. Notably consumer electronics, fast moving consumer goods and cars. Our houses are also worth a lot more. But is that really what ‘better off’ means? Many of the things we think of as increased wealth can be explained by increased distribution of cheaper consumer items, and the huge rise in credit card and mortgage debt, combined with lower average personal savings (and much less generous pensions deals for most workers) means we’re not really much better off in real terms, it just feels like it.

If you look at the rise in wages for 80% of UK earners we’ve experienced steady wage growth of around 2% year on year since the 1950s. The bottom 10% of earners are better off than that, thanks to the minimum wage and the cumulative effect of fiscal policies over the years, but these lowest earners have also been hit hardest by years of austerity.

However, the top 10% of earners have seen their incomes rise at about twice the rate of the rest of us. They have also doubled their share of the nation’s wealth compared to the 1970s. These statistics rank Britain 7th out of the world’s top 30 developed economies for inequality. But considering the boom years of the 80s, 90s and early 00s (even taking a recession into account) how can we explain that? Where did all the money go?

The top 10% of earners have seen their incomes rise at about twice the rate of the rest of us.

The finance industry boomed in the mid-1980s with the deregulation of the banking sector, which, combined with the computerisation of the industry, is referred to as the City of London’s ‘Big Bang’. It’s a period in history which stands out on all the economic charts and graphs, for all the wrong reasons.
It was the point when the Gini coefficients for income and wealth (statistical measures for gauging inequality within an economy) jumped significantly. Most notably, for incomes, the Gini rose by over 30% in the 1980s, and although it has declined slightly in the last decade (which shows inequality is narrowing), it’s still about a third higher than at any time since the 1920s. The same period also shows a marked increase in consumer debt, and it’s also the point where house prices started to rise significantly faster than preceding decades (which is important, because the huge boom in house prices accounts for the rise in the Gini coefficient for wealth inequality).

What this shows is when the finance industry boomed, it boomed on selling mortgages, insurance, investments and credit, and the increase in profits it made as a result caused the top 10% of earners (many of which worked in finance) to experience significantly higher wage growth of the other 90% of earners in the country. Further bank deregulation in the late 90s also drove another boom, and the same thing happened again, ending in the 2008 crash. Dealing with the crash pumped huge amounts of taxpayer cash into the banking sector (quantitative easing) which cushioned the top 10% from experiencing the full extent of the economic flat-line the crisis caused for the rest of the economy.

Over the same period, the bulk of middle ranking jobs (which distributed income more evenly before the 1980s) declined as technology replaced many types of industrial and administrative roles. This boosted productivity, but much of the increased profits that came with it were diverted away from corporation tax revenues and inward investment by offshore finance products and shareholder dividends. This had the net effect of reducing any long term trickle-down benefits for the broader economy, and did relatively little for most people’s pay packets. The deregulated banking sector made big profits from that outward flow of useful capital from the UK economy, which compounded income inequality further.

When you consider all the data, the story of Britain’s inequality (and many developed economies experienced similar) is a story of the finance industry booming at the expense of the rest of the economy. Most of the increased wealth and disposable incomes for 90% of earners can be accounted for by tax breaks, rising house prices and cheaper products rather than income rises driven by economic growth.

The benefits of economic growth have been distributed upwards towards the top earners, and inwards from the broader economy towards the finance sector, for decades. Which means a lot of the visible evidence of boom years, like the iconic skyscrapers at Canary Wharf and in The City that sprung up in the 90s and 00s, aren’t just symbols of the economic prosperity the Big Bang brought to the UK banking sector, they’re also monuments to the sharpest rise in inequality we’ve experienced in almost a century.

The benefits of economic growth have been distributed upwards towards the top earners, and inwards from the broader economy towards the finance sector, for decades.