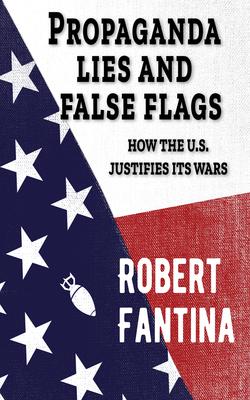 The Biden administration has wasted no time in showing that it, too, is going to continue the great American tradition of the ‘forever war’. So, will there be another unjustified precursor to the next US-led conflict?

Host, Ross Ashcroft, met up with Author, Robert Fantina and Political Scientist, Piers Robinson, to discuss how propaganda and false flag attacks continue to be used to keep the American tradition of eternal war going.

False flags as the precursor to war

In the first week of April, 2018 former US president Donald Trump declared his intention to remove US troops from Syria and rebuild America. A few days later, on April 7, the ‘mainstream’ media reported, without evidence, that Syrian president, Bashar-al-Assad, had orchestrated a chemical attack on the city of Douma. A week later, using the flimsiest of pretexts, the US, UK and France bombed Syria, a war crime under international law.

Then came the bombshell: Three months later, the Fact-Finding Mission (FFM) of the Organisation for the Prohibition of Chemical Weapons (OPCW), issued an interim report on the FFM’s investigation regarding the allegations of chemical weapons use in Douma.  No evidence of any nerve agents, including sarin, were detected.

As evidenced by other casus bellis (false flags) in Houla, Ghouta and Khan Sheikhoun, as well as in Libya, Iraq and Kosovo, the Wests reflexive war mongering underpinned by a complicit media machine, is a familiar script to anybody versed in state propaganda.

In his book, Propaganda, Lies and False Flags, author, Robert Fantina, highlights that the United States’ has been at war for 227 years of its 244 year history, an astounding statistic. War is a highly profitable business. Fantina cites the 20 year long US assault against impoverished Afghanistan as an example of a conflict that has been deliberately prolonged in order to boost the profits of arms manufacturers who, in turn, fund politicians and government officials. All three perpetuate the lie that the US needs to be strong against far weaker ‘enemies’, in this case, ‘terrorists’. But the nature of the ‘enemy’ depends on the specific geopolitical situation at any given moment in time.

In his book, Fantina also discusses oligarchic transition. The author opines that any differences between the Trump and Biden administrations is likely to be cosmetic with minor shifts in foreign policy.

Fantina posits that the US will continue on it’s pro-war trajectory:

“I don’t think he [Biden] will end the war in Afghanistan by any means. He will probably continue his sabre rattling against Iran. Who knows what kind of action he might take against Venezuela. And there will be some changes. He has said he will not support the Saudi onslaught and slaughter of the people of Yemen, but he hasn’t said anything about Israel and Palestine, about Indian Kashmir and many of the places where the US president could make a significant difference.”

Biden’s biggest bogeyman is Russia. His administration has flown bombers close to the country’s border, largely because of Putin’s alleged ‘meddling’ in the affairs of other nations. However, Biden has conveniently overlooked the fact that the United States has been interfering in the internal affairs of other country’s since it was founded.

Biden’s double standards and irresponsible bellicose actions are indicative of a unipolar worldview at odds with the kind of multilateral diplomacy widely regarded as a precursor to maintaining good and lasting relations between nations’. US exceptionalism and the bombing of innocent men, women and children, justified on the basis of noble intentions, will continue to be the driving force of a foreign policy under Biden whose principal purpose is to ensure that the cogs in the political, corporate and military machine are kept turning.

It was Eisenhower who famously coined the phrase, the ‘military-industrial complex‘ to describe the potential disastrous consequences for democracy and liberty in America arising from the misplaced and growing strength of the intelligence and industrial lobbies.

Political Scientist, Piers Robinson, picks up on some of the themes outlined by Eisenhower:

“Essentially, what has become the war lobby has a very clear warning. From the US interventions in Central/South America in the 1970s and 1980s, through to the US ‘war on terror’ in the middle east, what we have seen since then is a growing intensification of the problem that Eisenhower identified”, says Robinson.

That there has been a continuation of similar US foreign policies under various presidents throughout that time “is testament to the strength of the war lobby and military-industrial complex that Eisenhower warned us about 60 years ago.” This coalition of interlinking political and big business interests that function as part of a system in which successive presidents are little more than figureheads, is commonly referred to as the ‘deep state’ or ‘permanent state’.

There is also the revolving door between academia, policy making and corporate media which exist as mutually reinforcing and out of control structural entities, none of whom are independent. The latter routinely fail to hold power to account and are thus widely distrusted by the public, hardly the template for a long-term sustainable business strategy predicated on trust capital. Over the decades the public have become less trustful of the major networks and investigative journalists have become increasingly intimidated for not toeing the establishment line.

“Even if journalists know that’s what they’re pushing is not the truth – a classic example, Iraq and WMD – I think they are very intimidated, as are many people in the public, with the idea of challenging, of raising the question, that maybe their governments are not benign. It’s a very difficult thing psychologically for people to get over that hurdle. That keeps journalists in line and has kept them in line for a very long time, even when they know that they’re losing public support.”

From Robinson’s perspective as a critical academic, the notion that governments’ are anything other than benign has not been such a difficult hurdle to navigate. Robinson’s field is foreign policy, international conflict and media. Having worked on media propaganda and the Iraq conflict, the academic, along with other colleagues, set up the Syrian Working Group to challenge the political and media establishments anti-Syria propaganda.

The group have been vindicated as a result of leaks from OPCW whistleblowers in relation to Douma outlined above. They obtained evidence that the Foreign and Commonwealth Office (FCO) was engaged in a major propaganda operation against Syria.

According to Robinson, a new bout of US aggression against Syria under the Biden administration is to be expected because the country represents a key component of the long-term neocon objective of regime change in the region. How long the United States and it’s allies can continue to deceive a large swath of the public into going along with constant wars abroad especially when their own populations are struggling economically in a post-Covid climate, is unclear. In Robinson’s view, wars fought fraudulently in the public’s name are becoming less and less accepted to the extent that in the coming years a tipping point is bound to be exceeded.