It was the American writer, Gore Vidal, who playfully quipped, it’s not enough to succeed, others must fail. If we were to write a line that perfectly summed up America’s desire for global domination, it would be hard to top Mr. Vidal’s.

So will the US oligarchy remain unsatisfied with its successes and continue to push for the failure of other countries in the insatiable quest for so-called exceptionalism?

Host, Ross Ashcroft, met up with Journalist and Assistant Editor of The GrayZone, Ben Norton, to discuss.

Many people might not be aware of the fact that the United States has been at war an astonishing 93 per cent of its nearly 245 year existence, a statistic which suggests the military-industrial complex is integral to Washington’s profit-driven economic machine. The US political and media establishment need to create ‘enemies’ where there are none to enable this state of affairs to continue.

Enter Joe Biden’s new Democrat administration whose foreign policies in Venezuela, Iran, China and Russia have been the same as Trump’s. Previous Democrat administrations have portrayed themselves as different from their Republican counterparts, but as Ben Norton argues, Biden has broken with this tradition by intensifying Washington’s ‘forever wars’.

In Afghanistan, Biden has even reversed the attempt by Trump to end the war in that country. In Venezuela, the president has continued with Trump’s worst crimes by doing nothing to challenge the illegitimacy of the Juan Guaido ‘interim’ presidency and Trump era sanctions that have led to tens of thousands of deaths and crippled the country’s economy.

According to the UN special rapporteur on sanctions, 99 per cent of revenue in Venezuela has been lost because the country has been prevented from exporting its oil. “The brazenness of the Trump administration policy, imposing a mediaeval blockade in Venezuela and the fact that the Biden administration hasn’t even rhetorically challenged it, is pretty incredible”, says Norton.

Moreover, beyond the rhetoric, there is no evidence that Biden plans to relax the blockade on Yemen nor rein-in US support for Saudi Arabia’s offensive war in that country. This is despite the fact the president previously stated in a speech that his administration was going to end support for offensive operations in Yemen. This is a war that has led to hundreds of thousands of deaths and unleashed the worst humanitarian catastrophe on earth with more than 16 million people on the verge of starvation.

Regardless of who resides in the White House at any given time, Washington’s duplicitous genocidal wars continue unabated while the public look on seemingly helpless to stop them. In the view of Norton, this depressing state of affairs is symptomatic of the fact that the US and many of its allies are authoritarian oligarchies whose overriding purpose is to suppress democratic human agency. 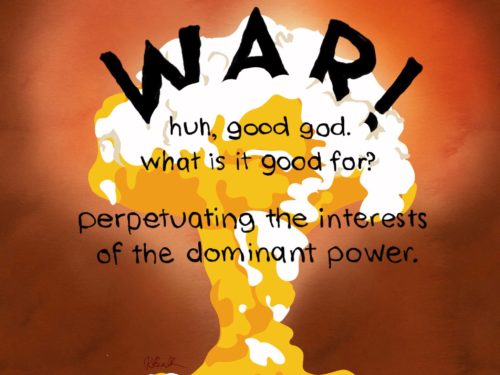 Norton argues that formal democracies are shepherded, not according to the democratic needs of the electorate, but in the interests of malevolent national security states’, their intelligence agencies and police forces. The notion that the system is free and democratic and that human agency is an integral part of it, is an illusion. Norton says that “human agency actually goes to the Central Intelligence Agency, the National Security Agency and the Defence Intelligence Agency.”

Authoritarian nation states’ that use the cover of democracy to systematically suppress the democratic aspirations of the mass of working class people through violence, are in reality agents of the billionaire oligarch class. These oligarchs control, and thus benefit, from the system, which explains why their wealth continues to grow.

“As long as we are blinded by the illusions that underpin the system, we’re going to continue to buy into the same propaganda that we were fed during the first Cold War and now during the new Cold War. But the more we’re able to puncture that myth and wake up to the reality, then we can actually fight for creating a new system”, says Norton.

The problem is that structural inequality beneficial to the elites is historically embedded. In the context of the US constitution, for example, the ruling class denied minorities and women not only equal rights, but their humanity. Indigenous people’s were also targeted in the worst genocide in human history which resulted in over 100 million dead. In monarchical Britain, royal family members supported and met with Adolf Hitler because they saw Nazi Germany as a force that would help save them from the threat of Bolshevism, as they saw it.

What this illustrates is that the way the system functions is concomitant to empires which are created to dominate the entire planet. In the context of the US, for instance, the majority of revenue spent by the government does not go to administer domestic affairs but to fund 800 military bases and the waging of dozens of wars around the world, both conventional and unconventional. Syria, Afghanistan and Iraq are just three examples in the middle east. But the US, through AFRICOM has special operations forces operating on almost every single country in Africa and its military bases span every continent.

Feeding off the republic

So the reality is that the US is not only not a democratic system, it was never set out to be a democratic system. It’s an empire. As US scholar Michael Parenti says, “the empire feeds off the republic.” That was equally true for the Roman Empire as it was true for the British Empire whose systems were created to oppress mainly poor, working class and ethnic minority communities.

The oppression continues to this day. For example, in the US, a form of slave labour exists among the country’s disproportionately poor, black and Latino prison inmates. Slavery has been reinstituted in the US prison system, allowed for by an amendment to the constitution that technically abolished chattel slavery. The elites within Western capitalist societies understand that the poorest and weakest, domestically, as well as competing geopolitical powers, internationally, have to be scapegoated for the failures of a neoliberal system at the point of collapse.

In order to maintain stability at home, the elite powers deem it necessary to create enemy ‘bogeymen’ abroad which explains the Russiagate propaganda concocted by the Western political and media establishments, as well as the negative stereotypes of Russian’s in movies and TV shows. “The reality is that the US empire wants to have its cake and eat it, too”, says Norton.

“The US empire sees any potential loss of control of a country as an attack on the infallibility, as it sees it, of its empire and its position as unipolar hegemon. Russiagate has helped convince many liberal and left-leaning progressive Americans that in order to oppose the Republican Party, they have to support more war with any country that is seen as an ally of Russia.”

With neoliberal-based societies further hamstrung by politically-motivated responses to Covid-19, the situation looks bleak for millions of working people. Norton argues that the overseeing by the Biden administration of rising unemployment and homelessness is commensurate to the situation in the 1930s which gave rise to not only fascism in Europe, but also to white supremacist terrorist movements like the KKK in the United States.

The election of Biden has also exacerbated the prospect of a new nuclear arms race. The role nuclear weapons played in interlinking the Wests anti-Putin rhetoric with the media backlash in response to Jeremy Corbyn’s opposition to nuclear weapons, was a very important factor in bolstering US exceptionalism in the context of empire.

Norton highlights the hypocrisy that lies at the heart of US-UK foreign policy in this area:

“Rich nations in the global north that have hundreds and thousands of nuclear warheads deign to tell independent countries in the global south that they can’t even consider the possibility of creating a nuclear energy programme”, says Norton.

By denying their official enemies access to nuclear weapons afforded to themselves, the Western imperialist powers are able to command undue geopolitical leverage which effectively allows them to impose mediaeval sanctions and overthrow governments almost at will. This has been demonstrated, most notably, in independent, post-colonial Iraq and Libya.