Joe Biden is angling for war with Russia and the excuse is Ukrainian sovereignty.

But Russia has 200 years of experience when it comes to Western forces piling up troops against its borders – and it’s led to a series of devastating wars. And again today, we are seeing the highest number of NATO and US troops stationed close to the Russian border.

Host, Ross Ashcroft, met up with Authors Alex Krainer and Dmitry Orlov who reveal that the real reason is something quite different.

In the penultimate chapter of his book, Grand Deception, Alex Krainer refers to a phenomenon known as the ‘deflationary gap’. Despite the fact that the deflationary gap led to the tragedy of two world wars, and is usually the pretext to wars in general, very little has been written in economics textbooks to help the public understand the context that lead nations’ into conflict.

Described by Carroll Quigley as the key to the history of the twentieth century, the deflationary gap is defined as the deficit in total disposable income relative to the current value of goods produced that is sufficient to cause a decline in prices and a lowering of production.

Higher rates of unemployment and further reductions in purchasing power are inevitable consequences of the deflationary gap. This, in turn, results in what are termed ‘deflationary death spirals’. To counteract these spirals and to ensure economies are kept buoyant, Western governments have tended to allocate funds to the military-industrial complex.

For the past 100 years, but especially since the end of WWII, the result has been perpetual warfare overseen by huge military budgets, corporate lobbying and a complicit media machine. The creation by Washington of new enemies and the maintenance of established ones, enables this state of affairs to continue.

Krainer says that the US public are being collectively misled by the media who cheerlead for catastrophic, wealth-extracting US wars in far-flung places. Thus, less than 100 days since he came into office, Joe Biden joined US TV host George Stephanopoulos, to indulge in a piece of pro-war, anti-Putin rhetorical theatrics to camera.

The role the media plays in cheering for wars has been total and the propaganda, all-pervasive. Official enemies like Russia and China or their leaders are demonized as monsters with no redeeming qualities.

In citing The American Journal of Public Health, Krainer notes that at least 80 percent of all wars in the last 70 years have been started by the US. The author contends that if the American people were to understand that the role of successive US administrations has never been about bringing freedom and democracy to the world, but “retaining US dominance over the Eurasian landmass”, (as former US Undersecretary for European and Asian Affairs, A. Wess Mitchell, put it), they would not give their consent to the system and would refuse to fight. “To be able to sell wars on that basis, you need heavy campaigns of disinformation. Unfortunately, this has worked for many decades, but now that we have the Internet there are no more excuses”, says Krainer.

The threat to world peace does not emanate from Moscow but Washington, although the public would never know this by watching CNN or the BBC. In the Ukraine for example, the dominant narrative is one-sided. Russia and Vladimir Putin are depicted as being responsible for a policy of military aggression in that country.

Dmitry Orlov proffers a different perspective. The author and blogger contends that the dominant narrative is part of a long-running media strategy to destroy Russia which will allow the West free access to its natural resources. Orlov claims that the US/NATO strategy of using a cadre of anti-Russian fascists to spearhead the carving open of Russia and to attack what are termed separatists in eastern Ukraine is proving to be a failure.

The political fallout from the mass slaughter of civilians in eastern Ukraine and the potential for an escalation of violence and mass civilian casualties in the Donbas region, are issues that are not taken lightly by the Kremlin. Orlov asserts that the Western media will steadfastly ignore this eventuality whilst any Ukrainian casualties will be reported as direct Russian aggression, no matter who is responsible.

“There is a certain bias in Western media where Russian casualties are simply not reported, especially amongst the civilian population. This has been the pattern for seven years now. I do not expect it to change”, says Orlov.

Former US ambassador to Moscow, Michael McFaul, has added fuel to the propaganda fire by characterizing the current situation as Russia building up troops on the Ukrainian border which McFaul claims is the pretext to ‘test Biden’. But as Sergei Lavrov pointed out, the US military regularly sends its ships to the Black Sea accompanied by aggressive rhetoric. “The question of what the United States is doing there with its ships and troops never ceasing to organise all kinds of NATO activities in Ukraine, thousands of kilometres away from its own territory, remains unanswered”, remarked Lavrov pointedly.

Alex Krainer also commented on the hypocrisy of Washington:

“Russia does not have troops and weaponry on the Canadian border, on the Mexican border or in the Caribbean. It’s the other way around. It’s the United States troops and NATO troops that are being stationed closer and closer to the Russian territory”, says Krainer.

“Russia has 200 years of experience about what happens when the West piles its forces up against its borders. It’s led to a series of devastating wars, last one of them in WWII. And today we have the highest number of troops by NATO and the United States stationed against the Russian border.”

Russia has legitimate reasons to be concerned about Washington’s geo-strategic motives and so feel justified in their adoption of a defensive posture as a means to discourage any acts of aggression. These concerns have come to the fore in recent years due to tensions that exist around the Nord Stream 2 gas pipeline which runs from Russia into the heart of Europe. 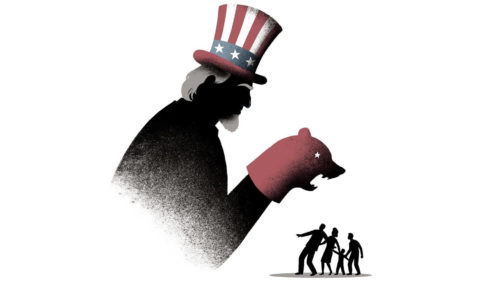 Alex Krainer became aware of the full extent of these tensions after he attended a Burisma-sponsored energy security forum organised by the Atlantic Council in May, 2019. Even though the conference was supposed to be about future energy transition, not confrontational geopolitics, former NATO General Secretary, Anders Fogh Rasmussen, who was present, commented on Nord Stream 2, announcing in brash terms that the project must be stopped “by any means necessary.”

“I think the objective is to provoke Russia into some kind of an aggressive act that might serve as a pretext to regain political pressure and to stop the completion of the Nord Stream 2 pipeline so not to find ourselves dependent on them”, says Krainer.

The notion of the non-dependent, indispensable nation, underpins the delusional imperative of Empire. The consolidation of power at any cost is the overriding motive of the leading hegemon even if that means leaving our children a dystopian world of permanent warfare.

In order to derail this nightmarish imperialist train from its tracks we need to reconfigure the system so that it serves humanity rather than the extremely narrow segment of interests clustered around the international banking cartel and the military-industrial complex.