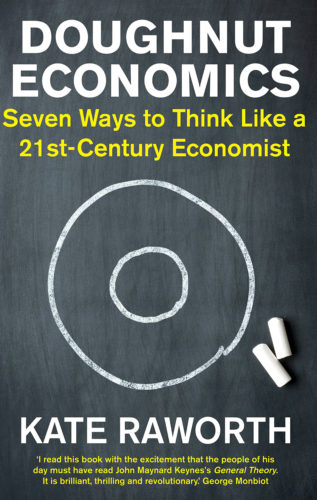 Queen Elizabeth visited the London School of Economics and asked why no economist saw the financial crisis coming. The professors were unable to answer her simple question but did admit that at every stage, someone was relying on someone else and everyone thought that they were doing the right thing.

In the latest episode of Renegade Inc, economist and author Kate Raworth discusses her book, ‘Doughnut Economics’, and calls for an ‘economic reformation’.

This week on Renegade Inc, we were joined by economist and author, Kate Raworth to discuss how we got here and to change the discipline of economics for the better.

“Economics, as taught in universities today, comes out of the textbooks of the 1950s which themselves are based on the theories of 1850s,” she said. “Given the challenges of the 21st century from climate change, to financial crises, to extreme inequality, that’s shaping up to be a disaster. What I discovered though is that these theories are so out of date with blind spots that economists barely even go back and look at the roots of where these ideas came from.”

Raworth wrote the book that she wished she could have read when she was an economics student, wanting to change the world.

“Economics has become a self-fulfilling complete theorem unto itself, which is taught as if it were the mantra to take up,” she says. “It has to be questioned. We have to go back examine those roots to see what was wrong with them.”

The Senior Associate at Oxford University says blind spots in economic theory have created a vacuum that has been filled by the narrative of neoliberalism.

“It began in the 1940s,” she said. “A small band of economists realised there was an opportunity to write a new narrative about what the economy was, and what it was for.

“Their method was ingenious. They described each economic actor with this set of such powerful traits, that the rest of the script almost wrote itself.”

In the 1980s when their laissez-faire their story is finally put on the international stage. The plot was loaded from the very start. And so for the last 40 years we’ve been told that the market is efficient, so give it free reign.

“The theory claims that the state is incompetent, so don’t let it meddle. Trade is win-win, so open your borders. The commons are tragic, so sell them off. There’s no such thing as society, so ignore it. The household is domestic, so leave it to the women.

With such a cast list, the triumph of the market seemed almost inevitable. This completely fallacious and incomplete theory has driven us into social and ecological crisis.

“But we were also told that finance is infallible. And that theory was so clearly disproven in the global financial crash that it has, (finally), called the rest of the story into question too.”

It is time to ditch this outdated neoliberal script, says Raworth. We need a new economic story that’s built a 21st century one that puts the economy in service to life.

So how should that story begin?

“My realisation as I was writing my book is that the most powerful stories are those told with pictures,” says Raworth. “We can’t write a new story if we don’t go back and change the pictures, the diagrams, the images that deeply slip into the back of our heads without us even realising them there.”

One of the diagrams most central to the profession was the ‘Circular Flow Diagram’ drawn by Paul Samuelson in the 1940s. It depicts the economy as a radiator system with money flowing through pipes, a way for his MIT students to understand how the economy works.

“What it shows is the market with households and businesses exchanging their labour for wages, and those wages are used for consumer spending to buy goods and services so the money goes round and round,” says Raworth. “So did the resources. So you’ve got this circular flow, but today when we look at that the blind spots of what it misses out are extraordinary.”

“Samuelson makes absolutely no mention of the living world. There’s no point in that closed system where we see that energy and materials are drawn in all the time into the economy and spewed out as pollution and waste. It makes no mention of the unpaid caring work of parents cooking washing cleaning sweeping raising the kids changing the nappies… All the important stuff that’s essential to wellbeing that makes that labour fresh and ready for work every day. Who made the labour fresh and ready for work? It’s not mentioned. And it makes no mention of the commons, the places where people come together to make something they value, whether that is a neighbourhood garden on the corner of their block or Wikipedia online.”

Raworth says the most essential sources of our well being is completely ignored in economic modelling.

“It is not setting us up well to understand the economy,” she says. “Those blindspots have come back to haunt us.

“Economist, Adam Smith said it’s not from the benevolence of the brewer, the butcher, and the baker that we get our dinner, but from their own interest. Well, Adam Smith was living at home with his old mum when he was writing this book and never even notices that.

“If he’d only turned around and realised mum was making his dinner as he was writing these sentences we might have seen the unpaid care economy reflected in economics right from the beginning.”

The first diagram economics students ever learn is that of supply and demand. Demand slopes down, the supply curve follows up the middle, the equilibrium.

“What happens is at some magical place where X marks the spot, is the convergence of price consumers or customers are willing to pay and the cost of producing it. A whole lot of economic education focuses on moving these curves up and down, a terribly simplistic model, based on Newtonian mechanics, that doesn’t really reflect the real world.

“The economists who drew these curves in 1872 were looking to the physics of the day. They wanted to make economics like physics, so they looked to Newton’s theories and they would say ‘just as Newton who came up with the physical laws of motion, we’re going to come up with the economic laws of motion: Supply, demand, and the law of diminishing margin returns.'”

The Senior Associate at Oxford University says the idea of economics as a ‘law of nature’ is one of the most powerful and pernicious myths that continues to perpetuate itself up until this very day.

“Once economists realised they wanted to explore economics as a science – as reputable physics – once they got data, they began to look for the equivalent economic laws of motion. But there are no economic laws of design for that original idea to be like.

These guys decided they were going to uncover the laws of how economies work. But it was a false goal. It’s physics envy, it absolutely is.”

It is these so-called ‘laws’ that put humanity off the train, trying to show it all with a bunch of maths.

“This to me is the fundamental shift: not recognising that the economy exists within the living world,” says Raworth.

Raworth says economists must stop trying to be like engineers and physicists, and become systems thinkers; Realise the economy is a complex, ever-evolving adaptive system. The art is to figure out how to intervene in that system, to tweak it, and nudge it into the direction we want it to go.

The essence of systems thinking is realising that we, the world, whether that’s your family relationships, or the boom-and-bust of stock markets, or the rise of the 1%, or the collapse of ecosystems, these patterns, their dynamics, are best understood through what is called ‘systems thinking’.

“Let me give you a simple example, says Raworth:

“The way starlings fly when they get to get in a flock, they have a very particular relationship to each other. They’ll stay about a wingspan apart. And when the other birds around them turn, they turn.

Now, put that little rule together and bring a hundred thousand of these birds together at sunset. You get what’s called a ‘murmuration’. Starlings make ‘extraordinary patterns’ in the sky. The emergent behaviour is hundreds and thousands of these birds, all following the same rule. You see it waving, and moving, and pulsing.

I love to watch murmurations; I look at that and I think ‘that looks a bit like the stock market’. Why? Because each bird is responding to another bird, it’s about investors’ expectations.

“The question is not how do I pull on the levers of supply and demand and make those laws work, the question is how do we intervene like stewards, like garden-designers, shaping and working with this evolving system.”

Economists typically think the way to intervene is by changing prices. But actually, Donella Meadows, one of the leading systems thinkers says no-no, this is a low leverage point. You actually want to go higher. The higher leverage points can change the goal of what the system is for.

“The 1970s model of business was that it should be equitable. Obviously, when you change that and you say, actually the business-of-business is to make a difference in the world, now you’re talking about purpose. When people going into business or set up enterprises systems thinkers believe their motives have massive knock-on effects for the structure of how one creates business, how they finance it. Because when you change the goal, everything else whittles-down around it.”

Watch the latest episode of Renegade Inc above to discover how a realistic economic system should be designed.