Oliver Stone, Hollywood director, producer, writer and documentary-maker used his opportunity while accepting a Writers Guild of America Award to take aim at the system which has produced institutional nation-building to further American interests, and encouraged young writers to be bold, brave and stand-out against the crowd.

While accepting the Laurel Award at the 2017 Writers Guild Awards, film-maker Oliver Stone reminded writers – young writers in particular – it’s ok to not fit in.

“It is fashionable now to take shots at Republicans and Trump and all that, and avoid the Obamas and Clintons,” he said.

“But remember this: in the 13 wars we’ve started over the last 30 years, and the 14 trillion dollars we’ve spent, and the hundreds of thousands of lives that have perished from this earth.

Remember that it wasn’t one leader, but a system both Republican and Democrat.”

Stone has courted controversy – probably less than he deserved – for a stunning book and documentary series of the same name, The Untold History of the United States, which contains exactly what the title implies: it charts America’s long, cynical, military history from 1913 all the way to today. 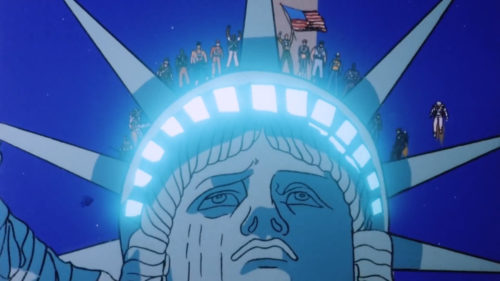 His accounts concur with that of the most decorated marine in US history, Smedley D Butler, who saved America from a fascist coup – Roosevelt’s punishment for The New Deal – financed and organised by the JP Morgan and Du Pont empires , after he was unsuccessfully recruited to lead the overthrow.

Butler was fed up with being a “gangster for capitalism”, he wrote in his book War is a Racket. By his own account he had helped pacify Mexico on behalf of American oil companies, Haiti and Cuba for Citibank, Nicaragua for the Brown Brothers Brokerage, the Dominican Republic for US sugar interests, Honduras for food companies and China for Standard Oil.

“Call it what you will – the military-industrial-security-money-media complex – it’s a system,” Stone said in his speech.

“A system that has been perpetuated under the guise that these are ‘just wars’, justifiable in the name of our flag that flies so proudly over our lives our country has become more prosperous for many.

But in the name of that wealth we cannot justify our system as a centre for the world’s values. What we continue to create such war and chaos in the world think.”

“Whatever you want to call it – it is war of some kind,” Stone said. “In the end it has become a system leading to the death of this planet and the extinction of us all.”

Stone has been fighting these people who practice war most of his life, and the filmmaker admits it is a tiring game.

“Mostly you’ll get your ass kicked,” he said. “And with all the criticism and the insults that you’ll receive, and the flattery too, it is important to remember if you believe in what you’re saying and you can stay the course. You can make a difference.

“I urge you. I urge you to find a way to remain alone with yourself listen to your silence. Not always in a writers room, not to try to find out what the crowd wants, so that you can be successful, But try instead to find the true inner meaning of your life here on Earth.

“Never give up on your heart, and your struggle for peace decency, and telling the truth.”

No matter where you sit on the political spectrum, there is a lesson for everyone in Stone’s three-minute speech. Watch the full video above.