The relationship between the media and its audience is driven by only one thing – trust. But that relationship today is strained because much of the mainstream or corporate media still think that they have a monopoly on the truth.

The indomitable 24 hour news cycle was launched so broadcasters could continue to control the narrative. But social media has broken its grip and also raised fundamental questions about impartiality and reliability.

So where next for those global media organizations whose figures are plummeting and whose audience now have greater options to find out what’s really going on?

Journalist and author of ‘Making The News’, Anna Brees and Professor of Media and Communications at Goldsmiths, University of London, Des Freedman, met up with host Ross Ashcroft to discuss how the mainstream media has managed to betray the trust of the people it should be serving.

On her twitter feed, BBC journalist, Laura Kuenssberg states, “I know it’s fashionable, but even in 2019 there is nothing big or clever about shooting the messenger”. Kuenssberg’s comment is revealing in that it exposes the perilous state of journalism today. Not only does it inculcate the craft with stenography, but it also highlights a disdain towards the public whose ‘crime’ is to ask probing questions of journalists who are supposed to work on their behalf. In his book, ‘Hidden Agendas’, John Pilger, refers to these messengers for power as “counterfeit journalists”. 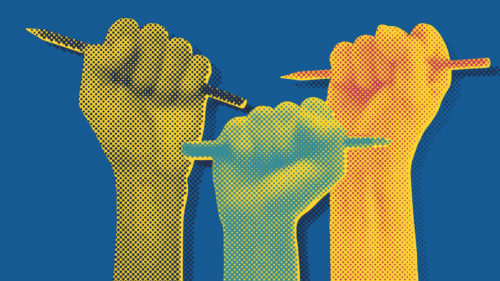 When the press attacks – the Times’ & BBC’s war on truth

What Pilger means is that the main role of mainstream journalists like Kuenssberg is to act as public relations mouthpieces for the propaganda messages that the political establishment want to convey to the public at any given time. Given this depressing state of affairs, we ought not to be surprised that public trust in mainstream media institutions is in decline. But this raises a related question: How can this decline be reconciled with the notion that an obliging public audience continues to view, in large numbers, a corporate media in thrall to state power?

For Des Freedman the question is moot:

I don’t think they have the same levels of power. I don’t think it’s an equivalence between the power, particularly of individual consumers, viewers, YouTuber’s and so on, and what I see is a very residual power of the media itself, says the professor.

Although uneven media-consumer power relationships are, to some extent, offset by technology, the public rarely have the necessary time or resources available to be able to fact check the claims made by the powerful. According to Freedman, people broadly distrust the major players to provide them with accurate information. The disconnect between the public and media is indicative of the inability of an elite commentariat to accurately reflect the everyday experiences and concerns of their audience. The public have a seemingly innate, instinctual, desire to protect themselves from what are largely inaccurate and “patronizing” media representations of their lives and experiences but are nevertheless not in a position to control the narrative.

Journalist Anna Brees notes that these kinds of false representations are a product of the nature of the medium. The pressure to create stories at increasingly rapid rates means that invariably journalists haven’t got the time to devote to researching the more challenging aspects of their craft.

Eighty or ninety per cent of the stories that I would produce would be press release based. It was easy, quick and low risk.

The frequency in which routine stories are published (up to eight times a day), is not conducive to good quality journalistic output.”Journalists are scared to be different”, says Brees. This adds to the disconnect people experience.

Des Freedman claims that journalistic group-think allied to the profit motive, is indicative of structural constraints that’s symptomatic of a media system in which Oxbridge and the privately educated are vastly over-represented. It’s a system that does not act in the public interest but against it. The academic is careful not to put the blame for this state of affairs solely on individual journalists and editors who most of the time “are dealing with pretty difficult circumstances.”

“The media system is frankly much more interested in reproducing established narratives and stories instead of challenging them”, says Freedman.

Citing Ofcom, the professor argues that media corporations remain the dominant news providers and that, on the whole, the public continue to put their trust in broadcasters like the BBC and ITV. Nevertheless, as Anna Brees infers, there are signs that the public are shifting towards alternative media sources for their information: “The public is rising up and understanding the message of new media and how we can take control, of our message.”

“I don’t look to the generation such as my mum and dad who watch and love the BBC, I look at my children who don’t even know who the BBC are.”

That said, whether this paradigm is illustrative of a definitive shift in the relations of power is open to debate. What is certain is that big political events – for example, Iraq in 2003 and the global financial crash of 2008 – have the affect of shaking up people’s attitudes towards media institutions and institutions in general. Ultimately, says Freedman, the public should be asking three questions: 1) Why does the media look the way it does? 2) What can we do to change it? and 3) In whose interests does the media operate at the moment?

If the current media system dominated by the likes of the Dacre’s, Rothermere’s, Murdoch’s and Zuckerberg’s has to be destroyed in order that a new one begins again from scratch premised on a different set of priorities, then Freedman is in favour of such a scenario. Is he hopeful? “Yes, because look around you. People are saying ‘enough is enough.”