Illustration by Rachael BoltonIt speaks volumes for the state of the Liberal-National Coalition government in Australia that the leaking of a transcript of the notorious phone call between US president Donald Trump and Australian Prime Minister Malcolm Turnbull, in which Turnbull was revealed to have lied about the proposed refugee-definitely-not-a-swap deal, was largely seen as a plus for the Australian government.

Sure, it showed Turnbull never thought that the men on Manus Island, an impoverished island that’s part of Papua New Guinea, were going to be resettled and that the whole thing was a smokescreen to hide the government’s culpability in human rights atrocities in our offshore detention system. But heck, maybe it would grab the headlines away from the many, many other disasters threatening to bring the government down, most notably the internal ructions over how hard to fight the inevitability of same sex marriage.

If that was the hope, it was a forlorn one. The threat of marriage equality remains a running sore for the government, despite regular assurances that it’s not a top tier issue for voters. Unfortunately the things that are top tier issues for voters – affordable housing, cheaper energy, action on climate change and a working national broadband system – also aren’t casting the government in a great light, let alone a competent one.

In a nutshell: the transcript shows Turnbull patiently explaining to Trump that the people in offshore detention are no threat and haven’t done anything wrong (Trump sounds unconvinced, very reasonably assuming that Australia wouldn’t lock people up for no reason) and that while Australia remains committed to taking refugees from central America as per the deal cut with the Obama administration, Trump is under no obligation to take a single person.

And this has come as a bit of a surprise to the people held in detention for whom resettlement in the US has remained the only option before them.

The situation up until now seemed to have a major flaw in that the camp on Manus Island was being actively dismantled while the inhabitants await their “extreme vetting” – vetting which we now know doesn’t necessarily lead to a single person being resettled.

And this is an issue because the options available to the men can be reduced to one: stay in Papua New Guinea. Not that PNG have any intention of supporting them to do so – they have neither the resources for the job nor any enthusiasm for cleaning up Australia’s mess – but neither are they in a position to deport them (to where?) or to imprison them. After all, being imprisoned without charge is illegal under the PNG constitution, which is the reason the camp is being closed in the first place.

The problem is that Australia has even less intention of cleaning up Australia’s mess. Our newly minted Home Affairs Minister Peter Dutton has made clear that the options for the men on Manus are to return to their country of origin – which in most cases are countries which have no intention of taking the men back (Iran and Afghanistan, Pakistan, for example) and to which it would be dangerous to travel.

There was a time where we could smirk at the ridiculousness of sending people back to war zones was considered safe enough for the detainees, but too dangerous for the Australian officials obliged to travel with them. That no longer seems quite so amusing now.

So the people on Manus Island are almost certainly going to be left there to make their own way as best they can. The problem is that they can’t leave, and that they will be murdered if they stay.

The locals tolerated the camp while it was a big local employer that paid Australia-level wages in an impoverished region. The Manus Regional Processing Centre was effectively subsidising the entire local economy, and it’s closing. There are already reports of locals attacking refugees with machetes, and at the moment those still in the camp are refusing to leave even as the power, water and supplies are cut off on the perfectly accurate grounds that they have nowhere to go.

It would be great to say that Australia has been appalled at having their assumptions confirmed, but the treatment of asylum seekers in far away camps has long stopped being a hot button issue for most voters.

Still, the cack-handed mismanagement of this matter is yet another black mark against a struggling government who are likely to have their arses handed to them at the polls – which will be cold comfort for the men facing a horrifyingly uncertain future on Manus. 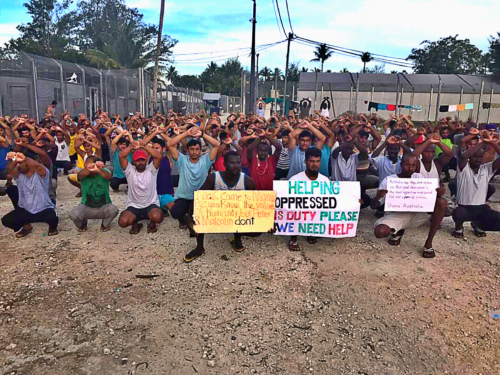