From the unsubstantiated assertions that Putin fixed the US election, the fake claims of Russian hacking, the hysterical and baseless claims of Facebook ads paid for by the Kremlin, Washington’s banning of RT and Sputnik ads and Theresa May’s speech calling Russia a threat to Western civilisation, the attempts to demonise Russia and Vladimir Putin have taken a sinister, McCarthy-ite turn. 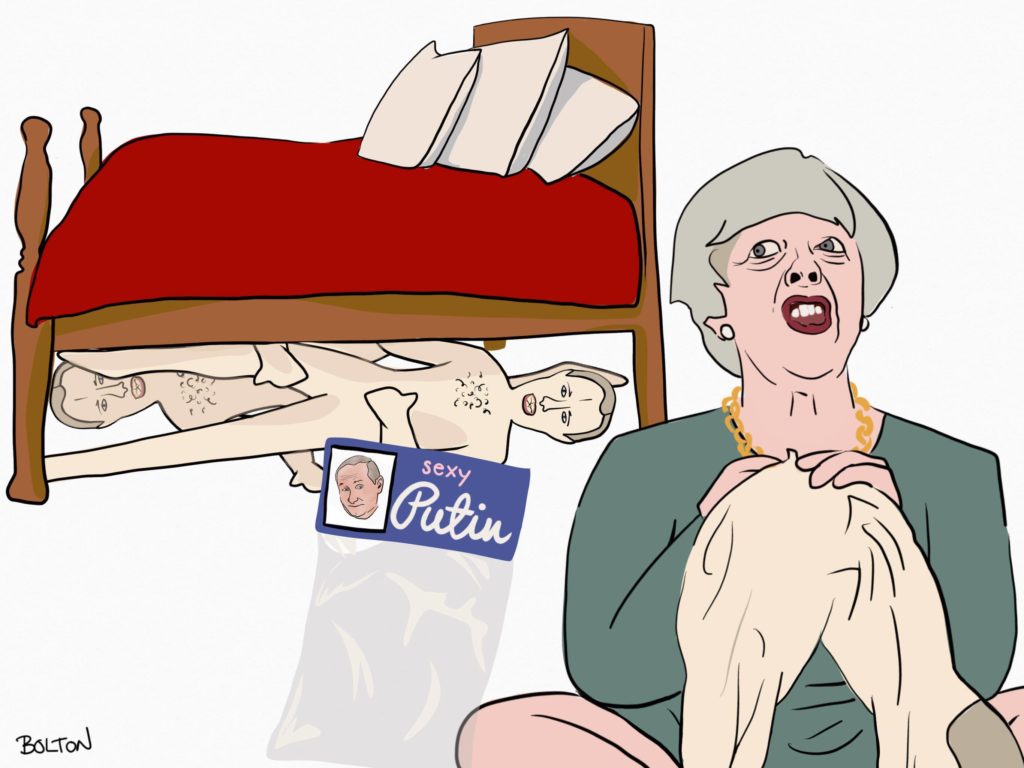 Ever since Donald Trump was elected into the White House, the corporate mass media have gone into perpetual overdrive in regards to the extent to which they have demonised Russia and Vladimir Putin. It seems that the latter is to be blamed for all of the world’s problems.

The Russian-based channel RT were only half-joking when they broadcast a short satirical piece on one of their news bulletins. The piece would have been comical had not the consequences been serious in terms of the potential damage anti-Russian propaganda does to fragile US-Russian relations.

From the unsubstantiated assertions that Putin fixed the US election, the fake claims of Russian hacking, the hysterical Washington Post Facebook story and Washington’s banning of RT and Sputnik ads, the attempts to demonise Russia and Vladimir Putin have taken a sinister, McCarthy-ite turn.

The anti-Russian propaganda was stepped up a further notch during Theresa May’s November 13 speech at the City of London’s Mansion House, after the British PM regurgitated the Cold War narrative perpetuating the myth that Russia is a threat to Western civilisation.

May’s simplistic analysis ignored the history of US subversion in numerous countries throughout the world, the US-led coalitions illegal wars of aggression against the sovereign nations of Iraq and Libya and the Western alliances attempts to destabilize Syria.

Appearing to actively threaten Russia in the latter part of her speech, and with the arrogance akin to that of a 19th century imperial overseer, May bombastically exclaimed:

“So I have a very simple message for Russia. We know what you are doing. And you will not succeed. Because you underestimate the resilience of our democracies, the enduring attraction of free and open societies, and the commitment of Western nations to the alliances that bind us.”

Reds under the bed

Both the American’s and British have been ably assisted in their ‘Reds under the bed’ scare mongering by Hollywood. Steven Kurutz argues that the American studio has a history of stereotyping Russian’s as “Hollywood’s go-to villains” – a narrative whose origins go back to at least the Napoleonic wars of the early 19th century.

Propaganda against Russia was, as Norwegian political scientist Iver Neumann attested, continued by Napoleon’s former confessor, Dominique Georges-Frédéric de Pradt, who in a series of books portrayed Russia as “despotic”, “Asiatic” and “power hungry”. The paradox is not lost on the Russian’s who understand that historically, as part of the Crimean war, it has been Britain that has invaded Russia, not the other way round.

“As early as 1834 David Urquhart, First Secretary at the British Embassy in Constantinople, was organising a committee of ‘Mujahideen’ – as he called them – and running guns to Chechnya and Dagestan for the jihadists to fight Russia. In 1917 British troops again invaded Russia, landing at Archangel and Murmansk.”

A necessary pretext to the waging of wars against official enemies, is the use of propaganda by the state to achieve that end. Even the influential British economist John Maynard Keynes was not averse to its power. Fifteen years after British troops landed at Archangel and Murmansk, Keynes wrote on Russia in Essays of Persuasion (pp. 297-312) that the oppression in the country, rooted in the Red Revolution, perhaps was “the fruit of some beastliness in the Russian nature.”

Unlike the British empire, its Russian and Soviet counterparts had established their rule through the acquisition of contiguous land which ensured their hegemony over eastern Europe. Most of modern Russia that includes, for example, Dagestan and Chechnya, wasn’t the Russia of the 19th century when Britain were organizing its gun running as part of the war of aggression against it.

An understanding of the historical context helps explain why Russia is fearful of Islamic instability and why the country is concerned with the further spread of Islamic Jihad. It also partly explains why Putin got involved in Syria following Assad’s invitation in October, 2015. The existential threat Russia faces from Islamic extremism in its colonies is comparatively greater than that faced by the West in theirs.

Historically, the threat to Russia from Islamic extremists has been exacerbated by Britain’s imperial strategy. By the 1830s the British were consciously and explicitly exploiting divisions in Afghanistan. During their first invasion of the country, the British played off their support for the Shia-based communities against their Sunni counterparts.

Russia is demonized by the West for the role it is currently playing in Syria. But the main reason the former is active in the country is to act as a counterbalance to the centuries-long determination by British imperial forces to exploit the Shia-Sunni divide as the precursor to gaining territory and thereby to attempt to dislodge Russia from land that it conquered through its own imperial endeavours.

The increase in Russophobia over the last few years – that in many ways is more extreme that anything experienced during the height of the Cold War – mirrors Russia’s intervention in Crimea which was a reaction to the US-led engineered coup in Ukraine that preceded it. Western fears of Moscow are underpinned by the notion that it’s the mission of Russian communism to take over the ‘free world’.

These fears arise periodically as a consequence of the perceived Russian threat to Western imperialist ambitions. Nothing Putin has ever said or done warrants this fear mongering. He has displayed no desire to attack the UK or the US and there is no cultural, linguistic or historical reasons why he would want to do so.

Russia’s imperialist ambitions have involved the swallowing up of contiguous land rather than extraneous colonial land grabs and the eastward expansion of NATO typical of Western imperialism. The growth in the amount of US-NATO missile bases positioned around Russia which is much larger than during the period of the Cuban missile crisis, is clearly an act of provocation tantamount to US aggression.

While Russia is faced with genuine potential threats from its Islamic colonies, Britain’s adversarial positioning in places like Cyprus and Bahrain serve no purpose other than as an expression of the projection of aggressive military power.

In terms of the latter, the British establishment is actively supporting one of the most appalling human rights abusing regimes on earth. With its majority Shia population that is ruled over by a tiny Sunni minority, Bahrain is a state that was essentially created by British imperialism underpinned by a fluid foreign policy that shifts depending on which president has been elected to the White House.

During a speech she made in Washington, Theresa May claimed that the days of military interventions are over. But if this were true, why would Britain need a military base in Bahrain?

As Craig Murray contends, its difficult to argue in favour of the notion that Britain’s military capability is anything other than offensive:

Aircraft carriers are of no defensive use whatsoever, and indeed are hopelessly vulnerable against any sophisticated enemy.

Their sole purpose today is the projection of power against poor countries.

Their use lies only in the neo-con policy of attacking smaller states like Iraq, Libya and Syria. They are Blair force carriers.”

“Britain is a country where thousands of children go to bed hungry. Yet it spends billion upon billion on Trident missiles whose sole purpose is to increase politicians’ sense of importance, and aircraft carriers designed to facilitate the maiming of other nations’ children. A rational, defence oriented military would have neither.”

Orwell’s famous phrase “war is not meant to be won, it is meant to be continuous”, is probably no more apt than in relation to the Wests periodic war games with Russia. War is big business and the “Russian threat” is the justification for the conducting of this business.

In this sense, the Cold War and Russophobia could be seen as synonymous. Putin is regarded as a Western ‘demon’ by May because unlike his counterparts during the post- German unification period, the Russian leader refuses to be seduced by the Washington neoliberal consensus.

The current Russiagate Cold War phase can arguably be traced back to the summer of 2006 when Russia hosted its first ever G8 summit. This was the period when Putin began reasserting Russia’s super-power credentials. Under Putin’s predecessor, Boris Yeltsin, Russia had effectively become a vassal of the US. Putin ended that subservient status.

It was Moscow’s international independence in foreign policy, allied to its role as a gas and oil supplier, that prompted the then US vice-president, Dick Cheney, to make one of the most anti-Russian speeches of modern times. Condemning Russia’s lack of democracy to an audience in Lithuania, Cheney proceeded on to Kazakhstan, where he praised its president whose elections are more flawed than Russia’s.

Putin’s reaction to the Cheney tirade was significant. He made only three mentions of the US in his state of the nation address a few days later, one of which was a flattering reference to Roosevelt’s new deal as a partial model for Russia. Unlike the hard power of the US under a succession of US presidents – including Trump – Russian foreign policy under Putin appears to be guided by soft power.

A succession of US and British governments should have welcomed the landmark G8 summit. But instead, they have portrayed Russia’s status as an autonomous super power as the emergence of a new ‘Russian threat.’

Over a decade later, following the unsubstantiated accusations that Russia leaked emails showing Clinton’s corruption – allegedly in order to influence the US election – Cold War anti-Russian propaganda has reached a dangerous phase.

2 thoughts on “The politics behind ‘Russiagate’”