Dear America. Stop trying to make Russiagate happen. It’s not going to happen. Deus ex Mueller isn’t coming. You’re going to have to solve your country’s problems yourselves, America. He may dig up evidence of corruption, but Robert Mueller’s investigation will never – ever – find proof that Trump colluded with Russia to steal the 2016 election using hackers and propaganda. If you attribute all your problems to Trump, you’re guaranteeing more Trumps after him, because you’re not addressing the disease which created him, you’re just addressing the symptom. A while back I figured out a trick for using Twitter as a tool to find out what sorts of things establishment loyalists really don’t want me saying. Once I discover a really hot button, I write an article that bangs on that button as hard as possible. One of those buttons is expressing my certainty that Robert Mueller’s investigation will never, ever find any proof that Trump colluded with Russia to steal the 2016 election using hackers and propaganda.

We are not allowed to say such things. If you debate a Russiagater for any length of time and you know how to debunk their assertions, they always, always, always wind up resorting to a “just you wait until Mueller finishes his investigation” declaration, which from my point of view is the same as debating a fundamentalist Christian whose argument boils down to “Well I’ll be proven right when you die and God sends you to Hell!”

You can always feel right if you kick the can around some corner in the future that can’t be seen and analysed critically. Luckily for us, we’ve got information that we can look at right now which does not require any religious faith.

Anonymous Leaks to the WashPost About the CIA’s Russia Beliefs Are No Substitute for Evidence https://t.co/OB33Xbb49V

NSA staff used spy tools on spouses, ex-lovers. Think it takes a warrant? Nope, just somebody willing to do it. https://t.co/AW2UYitHzb

We know from the Snowden leaks on the NSA, the CIA files released by WikiLeaks, and the ongoing controversies regarding FBI surveillance that the US intelligence community has the most expansive, most sophisticated and most intrusive surveillance network in the history of human civilisation. Following the presidential election last year, anonymous sources from within the intelligence community were haemorrhaging leaks to the press on a regular basis that were damaging to the incoming administration. If there was any evidence to be found that Donald Trump colluded with the Russian government to steal the 2016 election using hackers and propaganda, the US intelligence community would have found it and leaked it to the New York Times or the Washington Post last year.

The factions within the intelligence community that were working to sabotage the incoming administration last year would have leaked proof of collusion if they’d had it. They did not have it then, and they do not have it now.

Mueller will continue finding evidence of corruption throughout his investigation, since corruption is to DC insiders as water is to fish, but he will not find evidence of collusion to win the 2016 election that will lead to Trump’s impeachment. It will not happen.

This sits on top of all the many, many, many reasons to be extremely suspicious of the Russiagate narrative in the first place.

Humans are storytelling creatures. The most significant and most underappreciated facet of our existence is how much of our interface with the world consists not of our direct experience of it, but of our mental stories about it. Combine that fact with the century of research and development that has gone into refining propaganda tactics and the US plutocracy’s stranglehold on mainstream media, and you get a nation lost in establishment narratives. People forming their worldviews based on phantasms of the mind instead of concrete facts.

I’ve noticed a strange uptick in establishment loyalists speaking to me as though Trump-Russia collusion is already an established fact, and that I’m simply not well-informed. There is still the same amount of publicly available evidence for this collusion as there ever was (zero), so this tells me that the only thing which has changed is the narrative. Pundits/propagandists are increasingly speaking as though this is something that has already been established, and the people who consume that propaganda go out and circulate it as though it’s an established fact. When you’re not plugged into that echo chamber, though, it looks very weird.

This is why Russiagaters find my certainty that collusion will never be proven so intensely abrasive. Their entire worldview consists of pure narrative — literally nothing other than authoritative assertions from pundits who speak in a confident tone of voice — so when they encounter someone doing the same thing but with hard facts, it causes psychological discomfort. This discomfort is called cognitive dissonance. It’s what being wrong feels like.

I mean, I get it. Really, I do. When I stop listening to the narratives of both his supporters and his detractors and just look at the hard facts, from my point of view Trump is doing some really shitty things and doesn’t seem much different from his neoliberal neocon predecessors. Republicans are horrible, and he seems pretty much like a garden variety Republican who says rude things on Twitter. If I look at those hard facts, then add in two years of psychological brutalization by the corporate media telling Americans that Trump is an evil Nazi who will turn the country into a smouldering crater, I can understand why people would be in a hurry to get him out of office.

And when I converse with Russiagaters, that’s generally what this boils down to. “Impeach Trump” is a punishment in search of a crime. They’ve been whipped into a frenzied state of fear by establishment psyops, and they want Mueller to pull a deus ex machina and save them from the evil orange monster. They believe Mueller will get Trump impeached for Russian collusion because they badly want to.

It’s not going to happen, though. Deus ex Mueller isn’t coming. You’re going to have to solve your country’s problems yourselves, America.

And this is actually a good thing, because Trump is not the source of your country’s problems. Believing that a Trump impeachment will fix any of America’s major ills is like believing cough suppressants cure pneumonia. What do you get when you have pneumonia and you take cough suppressants instead of antibiotics? You get wrong-sounding Muppets, that’s what.

If you attribute all your problems to Trump, you’re guaranteeing more Trumps after him, because you’re not addressing the disease which created him, you’re just addressing the symptom.

The problem is not Trump. The problem is that America is ruled by an unelected power establishment which maintains its rule by sabotaging democracy, exacerbating economic injustice and expanding the US war machine. Stop listening to the lies that they pipe into your echo chambers and turn to face your real demons. 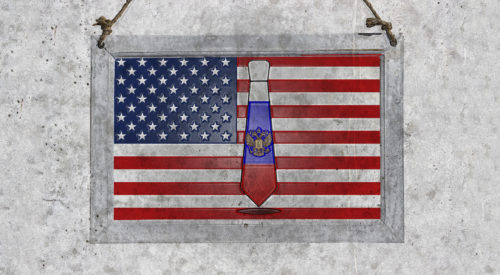