A coalition of Conservative chaos is now hostage to Northern Ireland’s Democratic Unionist Party after a snap election in which the right-wing British media chose to paint Jeremy Corbyn as an IRA terrorist sympathiser. 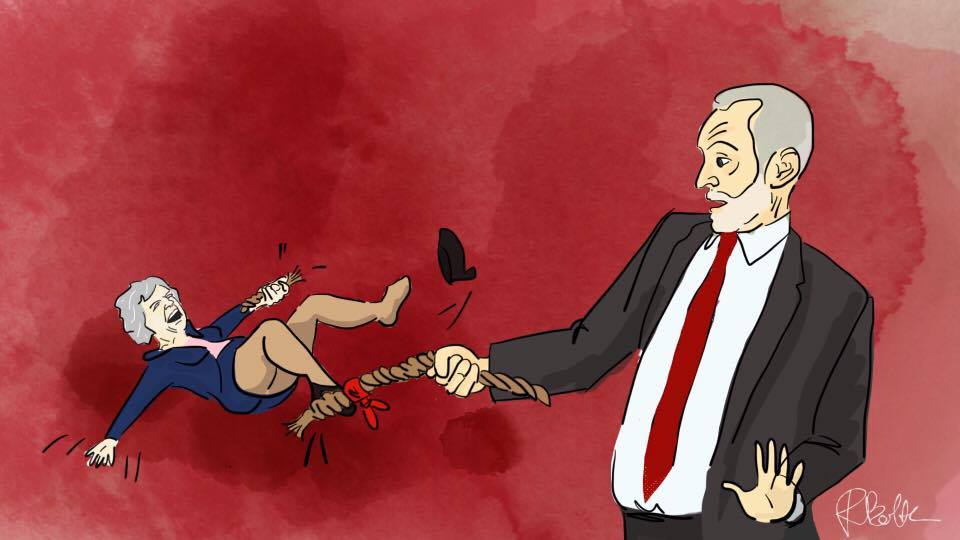 You can’t write this stuff. The coronation election didn’t materialise, the hubris hangover has silenced the Tories and a Prime Minister who has served for just three hundred and thirty days is hostage to a hung parliament for Brexit negotiations. An ‘omnishambles’ doesn’t come close. This is a mess for which Theresa May and her political advisors Nick Timothy, Fiona Hill and Sir Lynton Crosby are solely responsible. Their mendacious bunker mentality makes Hillary Clinton’s failed campaign look positively expansive. No doubt conversations about how they can ‘blame the Russians’ for this will have started.

Snap elections don’t work for Prime Ministers. They are reactionary and the electorate gets understandably spooked wondering what the ulterior motive is. This legitimate suspicion is compounded when you put a Tory candidate like the emotionally unintelligent Theresa May front and centre. She was told not to take spontaneous questions from journalists, not to debate the opposition, not to be interviewed by people who raised the big issues, not to meet the public, not to cost out her manifesto and not to sell any hope. The big idea? Sell fear about Mr Corbyn then repeat a misjudged mantra about strength and stability. Is it any wonder the British people have called her out? As far as political failure goes this has it all.

Never Let Go of Nurse May

The lesson that those born to rule Tories are unlikely to learn is this: when your only strategy is to keep the young away from the ballot box and sell fear about the opposition, then ideologically and strategically you’re a busted flush. The other lesson is never threaten the British people. Mr Barack ‘back of the queue’ Obama showed you what happens when you do.

When your only strategy is to keep the young away from the ballot box and sell fear about the opposition, then ideologically and strategically you’re a busted flush.

The Tories a standing on the wrong side of history. As resurgent young people show a renewed interest in politics what can the Tories now offer them? More austerity? More neoliberal economics? More intervention in the housing market? More privatisation? More political double-dealing instead of big ideas and consistent leadership?

Meanwhile, as Jeremy Corbyn motors on for his hat-trick he did so using his radical strategy: stick to your principles. This approach continues to perplex those duplicitous Blairites who stalk the Labour party, many of whom are now creeping back toward their popular leader – humble pie in hand. Ugly to watch.

So this is a moment.

Mrs May put all her chips on criticising red for personal and party gain and… she lost the lot. This ill-thought-out gamble has compromised the British people. One thing we learnt during her woeful campaign was that the naughtiest thing she did as a child was to anger farmers by running through their wheat. When an isolated May goes to Brussels it is not just the farmers she’ll sell short it is the whole of the British economy. The Brexit negotiators Michel Barnier, Didier Seeuws and Donald Tusk have got her exactly where they want her. Only arrogance and stubbornness will keep her going – she’ll trudge on parroting more mindless slogans until Boris Johnson makes his all too predictable move at which point the British people will call time on this tawdry Tory tenure.

This ill-thought-out gamble has compromised the British people.

Forget lame duck May – she’s finished as are her chaotic coterie of cynics. For the next election, let’s  focus on the questions that any decent political leader would consider:

If you move a degree away from doing any of the above you are fighting the last battle. The unrealistic ‘property owning democracy’ idea has gone away, escalating house prices are no longer an election certainty and austerity is as futile as its chief architect George Osborne. So let’s focus on the what the ageing British population are concerned about: the young.

The Labour activist, great depression survivor and World War Two veteran Harry Leslie Smith puts this point succinctly: “Britain’s young have shown they can become the greatest generation of the 21st century. You have my respect”. Harry is onto something. This is where every politician should be looking – not to a woman who can’t get through a meeting without a script, not to a woman who is married to the defunct status quo and certainly not to a woman who can’t hear and act on the wider views of her party, let alone those of the country.

Britain’s young have shown they can become the greatest generation of the 21st century.

The one image that stayed with me above all others on election night was Theresa May’s motorcade driving down an empty motorway in the early hours. I was amazed that it had a lone police motorbike outrider. After her stint as Home Secretary I thought she had cut all the police who were surplus to requirements. Maybe the tax take from overseas arms deals is what pays for this security luxury. With her love of tiny advisory teams, closed door meetings and a desire to get rid of human rights legislation I’m beginning to wonder if she’ll call the Saudi Arabians to help her in the Brexit negotiations. They love a very public hanging.

Co-Founder at Renegade Inc.
Ross Ashcroft is an award winning filmmaker, broadcaster, strategist and co-founder of RenegadeInc.com. His debut feature Four Horsemen was a global success. His systemic understanding of business means he works on strategy and communication with business leaders and executive teams.