I Wish I’d Been in That Meeting: Inside Asda’s “panic room”

I wish I’d been in that meeting, the one where Asda bosses started screaming, like Chief Brody in the film Jaws, that they would “need a bigger boat.”  The red mist descended on Asda in January and since then they’ve been in full on panic mode behind the scenes. They tried to play it cool in public… until their clandestine removal of unmanned food bank donation points broke in the news. Now it’s all unravelling.

There’s a mini public outcry about it, but Asda are tight-lipped and spinning a very dry, unbelievable company line on “fairness” and “community policy” reviews.  There’s been ripples of disapproval from MPs. The Mayor of Liverpool has called for a boycott of Asda stores. The UK’s leading food bank charity the Trussell Trust is seeking answers, in vain.

There’s universal head-scratching about why all Adsa’s small, local food bank charities are all reporting the same thing: They were called-in for a meeting and told to clear out.

But here at Renegade Inc, we’ve worked it out.

How do we know they’re spinning?

The new official mantra is Asda will only accept manned charity collections, and no longer want permanent charity presence in-store, suggesting “a few times per month” would be better. They claim this will make in-store charity collections more effective. It’s about being “fair and consistent” to charities and customers alike.  Yes, Asda suggest their customers don’t always know where their donations are going and need someone on hand to explain it to them… because an unmanned trolley marked “Food Bank Donations” isn’t sufficiently self-explanatory for the average Asda shopper. Ouch, Asda PR, that’s a bit harsh isn’t it?

This official line of “fairness” is the first sign of deception, because it’s obviously not fair to small charities to insist on manned donation points.

Manned collections (like occasional campaigns) increase the cost of fund-raising.  Not if you’re a direct debit enabled, national ad campaign charity like the NSPCC with an army of volunteers and networks of local fundraisers.  But a food bank in a church hall in a semi-rural area with a couple of part-time volunteers? Especially the kind that reports 15-25% of all its donations come from the local unmanned Asda donation point.  They can’t afford it.

Are these small charities being more fairly treated now? No. They’re losing a quarter of their donations overnight, Even if they go back in-store occasionally, the trouble with food poverty is people need to eat all the time, not just once or twice a month, so this is major blow.

Asda has a charitable trust, the Asda Foundation, so they must know the problems small charities face with manned collection points. They have fobbed off the press by saying they’re making an additional funds available through their Foundation, and then let the truth peek out…  “We’re investing an additional £2m, so it’s definitely not to do with cost-cutting,”

Obviously Asda are trying to free-up physical space inside their stores, but not actually admit to it in public. Because admissions like that aren’t the Walmart family way, and Asda is trying hard not to embarrass their US parent company more than they have done already by being the UK’s worst performing supermarket chain (possibly in the history of supermarket chains).

Manned charity collections are pop-ups, they take up no more space than someone holding a collecting tin. Unmanned donations are fixed retail real estate.  They take up minimal space in the scheme of one store, but add them up across Asda’s 525 UK stores and it’s in the region of at least 1000 square metres of aggregate loss-making floor space.

Now, consider the following news stories that have broken about Asda since the food bank story… and think “floor space”:

2. Parent company Walmart has pledged £500m in investment to help Asda battle the discounters like Aldi and Lidl with low prices (as opposed to their failed attempts at multi-buy deals… or “household food waste” as we now call it.) That requires maximum cost efficiency, from floor space usage.

3. They have just announced their worst ever quarter in Asda history. Their CEO, Andy Clarke has described it as a “nadir” but insists “This is a business in financial control and in charge of the decisions we are making not a business in crisis,” How to you turn that around? (Floor space).

Clarke might have well have shouted “GET THE HELL OUT OF MY STORES YOU FREELOADERS! MY JOB’S ON THE LINE!”

The truth about Asda…

So, to recap… Asda has lost customers and market share at an average rate of 3-4% per quarter for a couple of years, it has hit a 9-year low and is still crashing out. Its giant US parent is bailing Asda out to the tune of £500m, but at the cost of an internal austerity regime that has cut hundreds of jobs and potentially thousands more, cut staff benefits and initiated a programme where every square inch of store space is being analysed for cost efficiency.

And we’re expected to believe that the most cost-inefficient internal store space, the unmanned charitable donation point, is being removed… BY COINCIDENCE? Really Asda? Shame on you.

Asda’s new slogan, as they reconfigure themselves to shamelessly copy Aldi and Lidl’s high-volume-low-margin bargain warehouse approach is this:

Perhaps someone should point out to Asda’s PR team the double irony that “saving money” is why charities desperately need unmanned donation points… and “living better” implies telling the truth, even if you’re the ASDA “Panic Room” team. 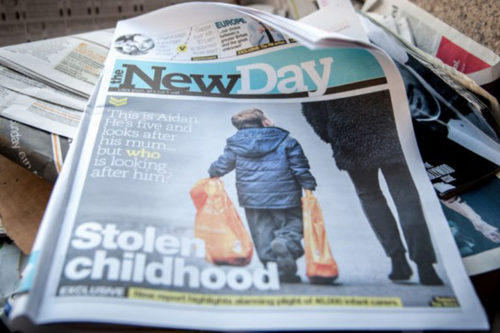 I Wish I’d Been in That Meeting: The New Day