A highly dubious election result. Months of bloody protests in which 120 people were killed. Opposition leaders taken from their homes in the middle of the night by secret police. A bomb explosion in the nation’s capital.  Venezuela is fast sliding out of democracy into dictatorship. 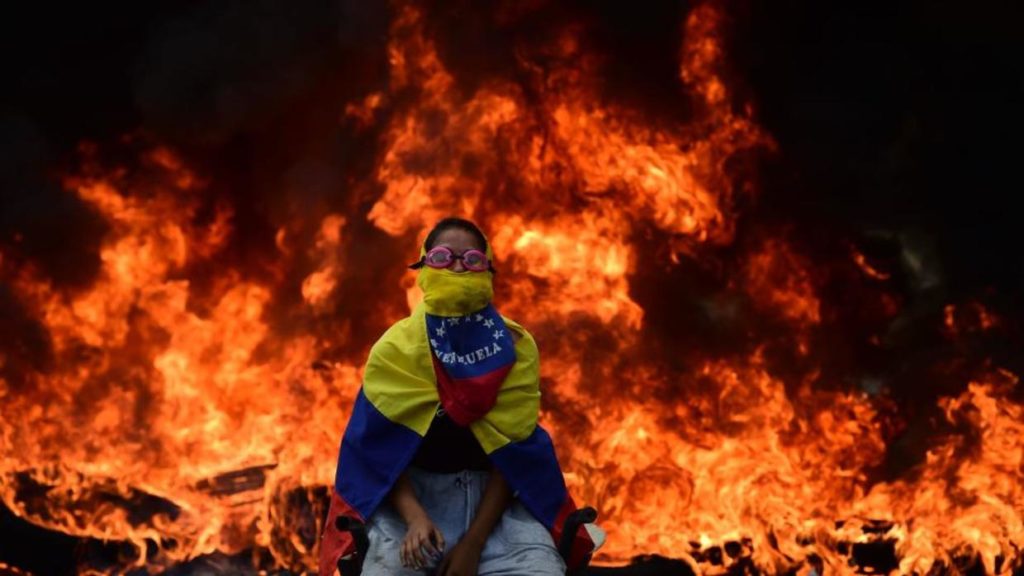 Venezuela’s narrowly-elected socialist president, Nicolás Maduro, was once a bus driver. Now, he’s been branded a power hungry dictator, who in four short years has burned the nation to the ground.

The nation relies on oil for 95% of its income. Oil shortages have had a flow-on effect, triggering food and medicine shortages, as well as the national currency to plummet. Just how bad is it? Venezuela is down to its last 10 billion dollars and owes roughly 7.2 billion dollars in outstanding debt this year. Though as a monetary sovereign – (it issues its own currency), it could spend more money into the economy to achieve prosperity, but at this point it seems clear Maduro’s government has no intention of doing so. US sanctions certainly don’t help things. More on this below.

Aside from the nation’s crushing socialist dystopia, violence has surged due to Maduro defiantly holding onto power, despite 80% of voters opposing his leadership.

After months of protests, which called to halt a national vote to change the constitution, 120 people have died, most of which have been students. The scenes of violence have been brutal, photos emerging of both protesters and police lit on fire. Last weekend was the bloodiest yet, with nine deaths confirmed after a shooting, as well as a bomb explosion in the nation’s capital injuring seven police officers.

What’s happening in Venezuela is a multifaceted political and economic crisis. And while Maduro’s actions have come under scrutiny in the past, things have escalated dramatically in the last few days, with two political prisoners being taken from their homes in the night wearing their pyjamas.

The mood on the ground in Venezuela is “a tense admixture of strong hope and pessimism”, says Dr Luis Fernando Angosto-Ferrández, a lecturer of Anthropology and Spanish and Latin American Studies at Sydney University.

“Part of the opposition support base is extremely demoralised after the celebration of elections for the constituent assembly. Other people, and certainly most of those who voted last Sunday, show pride in the strength of Venezuelans who, in their view, opt for peace in this scenario,” he says.

The constitutional vote which occurred last Sunday has largely been met with rage and mockery. Many have dubbed it a fraudulent election and while Maduro has said constitutional reform is a matter of “votes or bullets”, there has been little revealed about what the constitutional reform will actually mean for the people. Many fear it will give his party unrivalled power, allow further jailing of political opponents and further restrictions on the media. 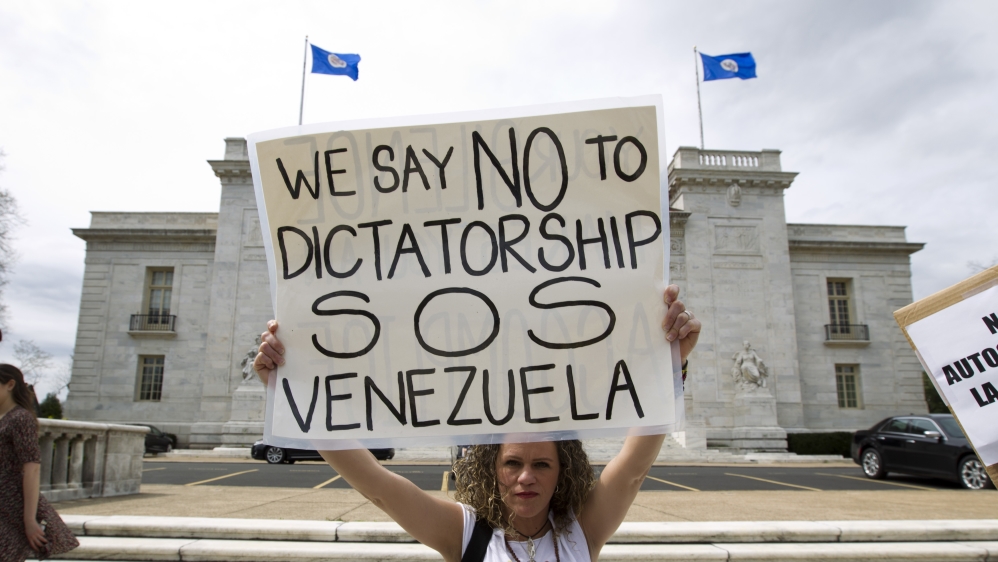 Dr Miguel Angel Latouche, an Associate Professor in Political Science at the Universidad Central de Venezuela says “it has been argued that the Asamblea Nacional Constituyente will institutionalise so-called ‘social missions’ and will provide a new structure of power to the country.”

However, Dr Latouche predicts the result will be tighter political control, the judicial prosecution of dissidence and the redefinition of Venezuela’s economic structure. There’s also a potential that it will increase “the presidential period and propose a revision on the limits of private property”, he says.

A nonbinding referendum organized by the opposition in mid-July revealed that an overwhelming majority of voters rejected the planned constituent assembly. And polling companies have argued that the votes were manipulated by at least 1 million votes. Yet, the Electoral Council claims more than 8 million people voted on the constitutional reforms last Sunday which would allow Maduro unlimited powers with a constitutional assembly. Trustworthy estimates predict that between 2 million and 3 million people actually voted.

“The Venezuela regime is moving in a grey area between democracy and dictatorship, using strength to control social distress and pressure political opponents. I believe that if we continue to advance in this path we will confront a high degree of violence,” says Dr Miguel Angel Latouche.

“We have lost our republican values, we confront a huge poverty and social exclusion, people have been bought by means of distribution of oil based rent and by the use of social media and social networks,” he says.

The kidnapping of two of Maduro’s political rivals has sparked international outrage. The two men, Antonio Ledezma and Leopoldo Lopez were taken from their homes and forced into vans in the middle of the night.

BREAKING: Venezuelan opposition leader has been taken from his home by the secret police just one day after elections. HE IS STILL IN PAJAMAS.

The two men’s families caught the events on video and promptly uploaded them to the internet. Lopez, a former mayor of Caracas, was put under house arrest last month, having served the previous couple of years in prison. As CNN reported, Lopez was detained in 2014, accused of inciting political violence.

Ledezma was arrested in 2015 by the Venezuelan Government after accusations Maduro accused him of being involved in an “American plot to overthrow the government”. He was later put on house arrest for health reasons.

Both men had spoken out against Venezuela’s constitution. In a video predicting his arrest, Lopez challenged the government for undemocratically silencing political rivals.

US President Donald Trump said in a statement that “the United States condemns the actions of the Maduro dictatorship… and holds Maduro … personally responsible for the health and safety of Mr. Lopez, Mr. Ledezma, and any others seized.”

Why is the US involved?

Donald Trump has done some muscle-flexing of his own, hitting Venezuela with financial sanctions.

US treasury secretary Steven Mnuchin labelled Maduro “a dictator who disregards the will of the Venezuelan people” and called his actions “illegitimate”.

Critics of the US have claimed that these sanctions have less to do with human rights and more to do with Venezuela’s swathes of oil, which the administration supposedly want to monopolise. In Off Guardian, David William Pear writes “the U.S. Empire wants a regime change in Venezuela. The Empire has been working on it for decades.” This follows the thinking of Maduro himself who believes he’s confronting a US-backed capitalist conspiracy.

The effects of wide-ranging US sanctions are disastrous for Venezuela, Dr Latouche and Dr Angosto-Ferrández admit. Dr Latouche says that the sanctions will represent “even more hunger and hardships” for the people.

“Those who are genuinely concerned with the wellbeing of Venezuelans and committed to contributing to find peaceful resolutions to the current situation in the country should be adamant in opposing such sanctions,” Dr Angosto-Ferrández says.

So WTF is going to happen in Venezuela?

Venezuela’s future is uncertain, with no exact date for the constitution reforms to come into place and no acknowledgement yet of what they will mean for the people. Anxious about the future, Venezuelans are fleeing the nation, with more than 50% of citizens wanting out of their own country.

Renegade Inc spoke to one 22-year-old man who is hoping to emigrate in December. “Students are still fighting and being murdered on the streets. [The constitution changes] are the written end of democracy,” he said.

Thousands of Venezuelans have made it clear that they will fight the new constitution, even if it means more bloodshed. The months of protests have been a literal trial by fire by the government. And if Maduro continues to ignore the people it is expected that protests will become more aggressive. However, the President has made it clear that Venezuela will have a new constitution, whether they want it or not.

Eden Gillespie is a freelance journalist based in Sydney/Madrid. When she's not drinking sangria, she's asking (far too many) questions and watching serial killer documentaries.

I'll start it with a coffee and the news, head to uni and write some stories. If I'm lucky I'll go to the dog park and pet some puppers. Lately, I've been obsessing over researching Spain, where I'll soon be based.

Why is journalism important to you?

In a time where "fake news" is a buzzword, quality journalism matters more now than ever. For me, journalism is an opportunity to tell important stories that otherwise wouldn't be heard. It's a way of letting people know what's going on, holding power accountable and most importantly, connecting with people from all walks of life.

What drove you to focus on journalism & writing? Was there a particular moment you can remember that led you to this field?

I was advised not to study journalism and told I'd "never get a job", but writing and journalism is something that I'm too passionate to give up on. Watching Louis Theroux documentaries was one thing that made me think 'yeah, this is what I want to do'.He stands for respectful, balanced and thought provoking journalism, and that really resonates with me.

What drives me is as simple as a good story. Something that has meaning to me, draws an emotional response, or makes me question my version of reality.

If you hadn’t become a journalist what would you have done?

I'd make travel documentaries National Geographic style. If that failed I'd be a detective, criminal lawyer, or diplomat.

I think a disenchantment with world leaders. Promises being broken, capital interests coming first over what populations need and want, and a lack of long term planning by policy makers. Basically, the obsession of holding onto power at all costs ala House of Cards.

I'm going to quote economist Steven Hail and say that "By 2008, the global financial system had become so large and complex... that virtually nobody fully understood how fragile and likely to crash the whole system had become." Neoliberalism has a lot to answer for imo.

Can you list some ‘Baby Steps’ out of the current economic mess?

In Australia, I'd say we desperately need to focus on making housing affordable and take a long hard look at negative gearing. We should be stimulating employment and innovation especially, rather than doing things like making visa changes.

If you were a global President what would your first three pieces of policy be?

Crack down on corruption, dispose of nuclear arsenals, transition towards renewable energy.

I truly believed that Hillary Clinton would be the US president right now.

You are stuck in a ski lift for twenty four hours - you can have one person (living or dead) with you who will it be?

It's a tie between Gloria Steinem and Louis Theroux.

Name the book that changed you….

I don't believe in starting over. I'm strongly rooted in the "learn from your mistakes" school.

Give our readers, members and subscribers a piece of advice that has served you well…

Be kind and always keep your mind open. Don't ever assume that you know the full story.

One thought on “Venezuela risks sliding into dictatorship”