Jakarta Governor, Basuki Tjahaja Purnama – informally known as Ahok – quoted the Quran in a bid to persuade voters to elect the next governor based on policy, rather than faith. That decision would land him in jail. Journalist Eden Gillespie explores the role that religion, identity politics and social media played in his political downfall. 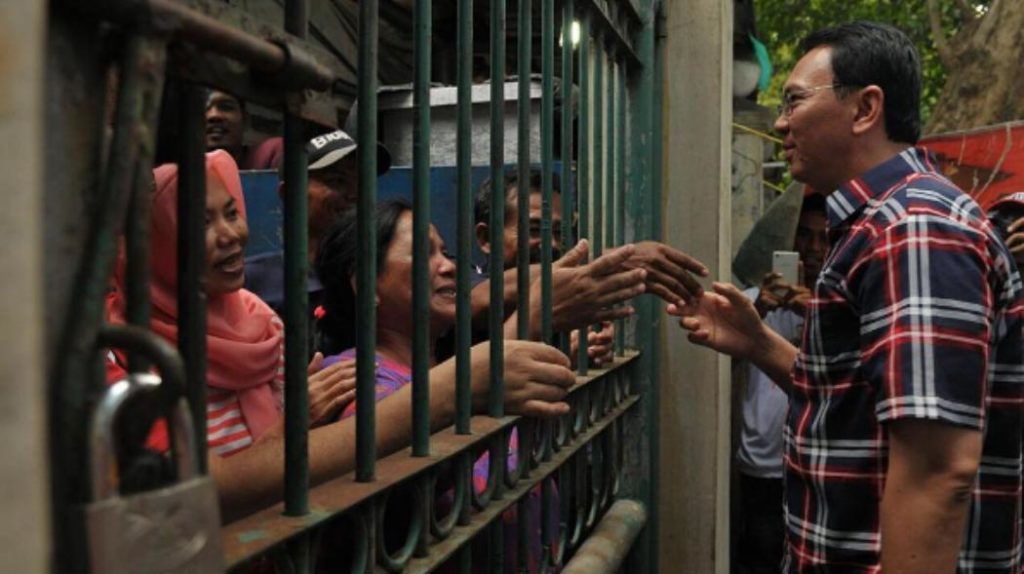 Ahok had quoted the Quran in a bid to persuade voters to elect the next governor based on policy rather than religion.

Basuki Tjahaja Purnama, informally known as Ahok, was once a force to be reckoned with in Indonesian politics. Appointed by current President Joko Widodo, Ahok was the first governor of Chinese ancestry and Jakarta’s second Christian governor in the Muslim-majority nation.

His legacy boasts improvements in traffic congestion and corruption, as well as achieving a minimum wage increase. And in this year’s pre-election polls Ahok’s voter satisfaction rate stood at over 70%. But fast-forward a matter of months and Ahok would be spending his 51st birthday behind bars, sentenced to two years imprisonment for religious ‘blasphemy’ on May 9.

So how did a governor who had the majority of citizens satisfied, lose out on an election and end up in prison?

While there were legitimate reasons to oppose Ahok, such as his forced eviction policies to relocate the poor due to flooding and congestion, identity politics and religion were central to his political downfall. His arrest came after comments he made last September erupted in a social media storm. Ahok had quoted the Quran in a bid to persuade voters to elect the next governor based on policy rather than religion. In his speech he claimed it was plausible that voters could be “threatened and deceived” by some groups using Verse 51 of Al Maidah and variations of it”. This verse had been used previously by some groups to convince citizens to oppose the Chinese Christian governor.

A short, edited excerpt of Ahok’s speech went viral on social media, ultimately leading to the ex-governor’s arrest. Yet only 13 percent of the 45 per cent of respondents who thought Ahok was guilty of blasphemy report having watched the excerpt. And so it was fake news and sensationalism that rose to the forefront of Ahok’s public narrative.

While President Trump made “fake news” a buzzword in the US elections, the era post-truth permeated Jakarta’s elections. Through WhatsApp and social media platforms, the short excerpt of Ahok’s speech caught fire on social media, taking the nuisance out of the longer version of his statement.

As Ahok told Al Jazeera, “What was spread on Whatsapp groups was only thirteen seconds. Of course the information on those thirteen seconds was different than what I said in 6000 seconds.”

Fake news continues to threaten politicians, in fact this post-truth vacuum has seen President Jokowi labelled a communist on social media. “Many “fakenews” portal sprung heading to the election. The radical groups also had an organized MCS (Muslim Cyber Army) which inundated social media with accusations as well as hoax news. These continue to present a threat against the president as well,” says Mr Basuki.

In the lead up to the 2017 governor elections, Ahok’s blasphemy claims were used in what some may call a bout of political opportunism by his opponents. The Islamic Defence Front (FPI) aggressively denounced Ahok, the group containing an estimated five million members and being in support of sharia law. The founder of the FPI, Habib Rizieq, led an Anti-Ahok campaign with unrivalled vitriol, encouraging hundreds of protesters to line the streets during the trial.

Ahok’s lawyer claimed that 12 witnesses linked to Rizieq’s FPI appeared in Ahok’s trial, with the final judgment condemned by the United Nations and Amnesty International.

“It was rather a well-constructed narrative built by Ahok’s political opponents that stitched together all reasons to vote against the well-performing governor. Ahok’s main political opponents prior to the election were those politicians whose corrupt practices had been hindered or curbed,” says Tobias Basuki, researcher at the Centre for Strategic and International Studies in Jakarta.

“Leading into the election, all disparate dissatisfaction was bundled together – non-Muslim as leaders, blasphemy, eviction policies, crudeness – to attack the then-governor,” Mr Basuki told Renegade Inc.

When Ahok was defeated by his Muslim political rival Anies Baswedan in the Jakarta gubernatorial election in April, many scholars announced conservative Islam had triumphed in a supposedly secular government.

The balancing act between politics and religion has always been precarious. Mr Buski claims that ever since its emergence as a republic in 1945, Indonesia has attempted “to fine-tune between religion and politics”. This saw an increase in piety predominately among Muslims after the fall of Suharto in 1998, he says.

Irine Gayatri, researcher at the Centre for Political Studies, Indonesian Institute of Sciences, tows the same line. She told Renegade Inc that the rise of conservative Islam began during the period of decentralisation following the resignation of Suharto. This resulted in mass organisations being made public, along with several regions in the archipelago implementing sharia law.

“Many references pointed to the fact that it was regional autonomy that opened ways for identity politics came to the fore in local and national politics,” says Ms Gayatri says.
But there is also a class proponent that cannot be ignored when looking into the catapult of Islam in Indonesian politics during the April election. As Ward Berenschot wrote in New Mandala, the logic behind the rise of political Islam in Indonesia is down to the security that Islamic organisations provide.

“Islamic organisations are providing security and sources of livelihoods to many people… Of course the most vulnerable communities face the strongest pressure to adjust their opinions in order to strengthen and protect their precarious livelihoods. For them a personal opinion is the biggest luxury,” he says.

Indonesian expert at the Australian National University, Dr Ross Tapsell, told Renegade Inc that the Jakarta elections mirrored worldwide trends where voters have increasingly decided on leaders based on emotions rather than policy details.

This comparison could be drawn to Jimmy Morales in Guatemala or President Trump’s US election.

In Jakarta, it was manifested by political campaigners denouncing Ahok over racial and religious reasoning. This was reflected in voter patterns, with only 41.5% of people voting for Ahok, despite over 70% of Jakartans believing Ahok had performed well as governor.

“The 2017 Jakarta election was highlighted by a new dominant form of political campaigning where religion was specifically addressed, and where religious leaders played a more prominent role in declaring their support for a particular candidate,” says Dr Ross Tapsell.

Eden Gillespie is a freelance journalist based in Sydney/Madrid. When she's not drinking sangria, she's asking (far too many) questions and watching serial killer documentaries.

I'll start it with a coffee and the news, head to uni and write some stories. If I'm lucky I'll go to the dog park and pet some puppers. Lately, I've been obsessing over researching Spain, where I'll soon be based.

Why is journalism important to you?

In a time where "fake news" is a buzzword, quality journalism matters more now than ever. For me, journalism is an opportunity to tell important stories that otherwise wouldn't be heard. It's a way of letting people know what's going on, holding power accountable and most importantly, connecting with people from all walks of life.

What drove you to focus on journalism & writing? Was there a particular moment you can remember that led you to this field?

I was advised not to study journalism and told I'd "never get a job", but writing and journalism is something that I'm too passionate to give up on. Watching Louis Theroux documentaries was one thing that made me think 'yeah, this is what I want to do'.He stands for respectful, balanced and thought provoking journalism, and that really resonates with me.

What drives me is as simple as a good story. Something that has meaning to me, draws an emotional response, or makes me question my version of reality.

If you hadn’t become a journalist what would you have done?

I'd make travel documentaries National Geographic style. If that failed I'd be a detective, criminal lawyer, or diplomat.

I think a disenchantment with world leaders. Promises being broken, capital interests coming first over what populations need and want, and a lack of long term planning by policy makers. Basically, the obsession of holding onto power at all costs ala House of Cards.

I'm going to quote economist Steven Hail and say that "By 2008, the global financial system had become so large and complex... that virtually nobody fully understood how fragile and likely to crash the whole system had become." Neoliberalism has a lot to answer for imo.

Can you list some ‘Baby Steps’ out of the current economic mess?

In Australia, I'd say we desperately need to focus on making housing affordable and take a long hard look at negative gearing. We should be stimulating employment and innovation especially, rather than doing things like making visa changes.

If you were a global President what would your first three pieces of policy be?

Crack down on corruption, dispose of nuclear arsenals, transition towards renewable energy.

I truly believed that Hillary Clinton would be the US president right now.

You are stuck in a ski lift for twenty four hours - you can have one person (living or dead) with you who will it be?

It's a tie between Gloria Steinem and Louis Theroux.

Name the book that changed you….

I don't believe in starting over. I'm strongly rooted in the "learn from your mistakes" school.

Give our readers, members and subscribers a piece of advice that has served you well…

Be kind and always keep your mind open. Don't ever assume that you know the full story.