Christian Felber is an Austrian book writer and economics and business teacher at Vienna University, and political activist.

His wish is that all human beings can live a joyful, pleasure-full and free life that meets their basic needs and says that the economy should be at the service of this. He has been busy developing an alternative to the present economic system that makes such a goal possible.

When people talk about neoliberalism they think that markets become freer thanks to liberalization and deregulation, but in former times Liberalism meant markets were strictly regulated with limited inequality, with limited freedoms for companies, with strong regulations.

To discuss neoliberalism today, for the first time in history liberalisation generally means deregulation which Felber says is making markets and citizens unfree.

“The increase of capital is the goal,” he said.  “Everything else is becoming comparatively irrelevant. That is why this system, on the one hand, is creating unprecedented financial wealth, but at the same time, it’s undermining democracy.

“It’s concentrating wealth and power. It’s boosting inequality. A growing proportion of the population has been cut-off from access to wealth. It’s destroying the environment. It’s discriminating against women and it is producing a whole series of collateral damages.

“It’s not liberal at all. I would call it pseudo-liberal.”

Felber says between 70-90% of citizens surveyed across 40 countries are asking for a different economic system.

Today many economists try to sell what is happening in the economy as natural and normal laws. But economics is a very young science that has already been separated from its broader context.

“Originally it came out of the philosophy of the most famous economists of all, Mr Adam Smith who described himself more as a moral philosopher, rather than an economist. There was no such thing as an economic science in his time. It is only later that economic sciences emerged.

“His successors, Jeremy Bentham and others and the first chair for economics, for instance, was only established in the 20th century. Thus started the separation of economic science from its context: ethics like the ecology of human feelings.

“Adam Smith still wrote about feelings for instance and other contexts. Today economists are very well educated economists who complain that the field has become like a mathematical science. Everything is focused on financial indicators and on money. In the end, this is a kind of totalitarianism because money or the capital has been turned into the end goal.

“This is a totalitarian approach and that’s why everything else is suffering.”

This isn’t a new idea. Economics as the pursuit of The Good Life harks all the way back to Ancient Greece. Neoliberalism has flipped the good life on its head. We’ve confused the good life for monetary gain.

Many people believe that Margaret Thatcher and Ronald Reagan were the mother and father of neoliberalism but Felber says they were just showmen.

The masterminds behind neoliberalism hark-back to the Mont Pelerin Society – an organisation of aristocrats, business-leaders, economists and world-leaders who conspired to rig the global financial system in their favour, with the help of Milton Friedman. 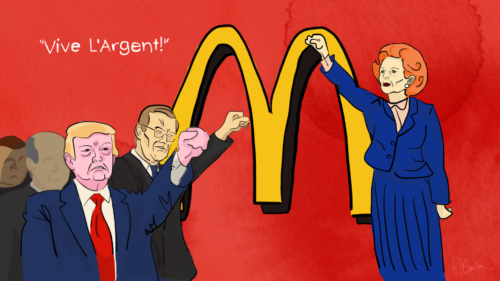 WTF IS HAPPENING: A history

“The strategic goal of this association was to spread worldwide and ‘mainstream’ their thoughts and their view on the economy, but also on our human beings, on our society globally.

“It’s megalomaniacal approach, because why should economists who are not psychologists, are not sociologists, who are not game theorists, who are not anthropologists and not neurobiologists think they know better than all other scientists how humans are and how societies work?”

Their project nevertheless succeeded with Thatcher the frontwoman in UK and Reagan in the US with Reaganomics, who claimed, all evidence to the contrary, that there is no such thing as society.

“To the contrary, Human beings are deeply dependent on each other,” says Felber. “We are relational beings. It doesn’t say that we are not free, but at the same time we’re deeply deeply dependent on each other. Humans prefer to die than not have relationships with other human beings. It is astonishing how successful this mass manipulation was. But of course we can explain it that there were massive winners of this ideology and the system that has been created according to this ideology.”

Felber says that in a democracy there are always alternatives.

If you say ‘there is no alternative’ then you’re admitting that you are no longer a democrat, that you no longer believe in democracy.

“There are strong arguments for creating a cooperative for market economies. This, very importantly, is not against free enterprise, because enterprises are still free and even get the same rights to found the enterprise. But in this system, everybody will be rewarded.

“The more we cooperate, the more we behave in solidarity,” he said. “ We will still be negatively weighted against each other, but this will not lead to monopolies because a second regulation of markets would be negative feedback mechanisms to prevent corporate cannibalism, or national cannibalism. It would still be possible but in the same way that we have forbidden it in our private relationships, we would forbid cannibalism within the economy. If we incentivise it strongly then companies will not grow endlessly and needlessly. If their goal is not the maximization of financial success indicators but to maximize the common good, then they will have no motive to become bigger than their optimum size. Then we can have lots of free enterprise at the human scale.”