We are on the brink of reformation.

Frustration has taken the world by the throat, from extremist violence, ethical quandaries and culture clashes put forward by the largest refugee migration since the Second World War, the failure of internationalism and globalism, and the rise of reactionary elements. The political and economic world is in disarray.

Coverage on these elements has at times been isolated, while others struggled to find convergences. Authoritarianism, neo-liberal economics, class struggle, have all made a theoretical come back, some rightfully so and others not so much.

Shells of a dream

It’s an inescapable truth that the economic meltdown of 2008 occupies a centrepiece in today’s volatile world. Before the “crash”, economic theory was full of healthy debate on growth, development, and sustainability. The need for a shift away from single macro level metrics such as GDP was clear, the concept of taxing negative externalities was gaining traction in line with theoretical approaches to making economics more social.

This all was quick to disappear with the crash of 2008 and one word replaced all theoretical weight, Austerity. A rift of cognitive dissonance within policy makers appeared, they could not ignore the social downturns of neo-liberalism, and neither could they ignore mounting national debt, failures of banks, and the need to rebuild. With the absence of a strong willed and coherent “left” there was no substitute to austerity, leaving it to rise as the cookie cutter solution.

The internationalised world built on the hopes of greater collaboration and freedom collapsed, and in its place remained its empty shell. In its shadow the EU, free trade, and international regulations, the institutions built to mitigate economic absolutism, became austerities staunchest advocates. 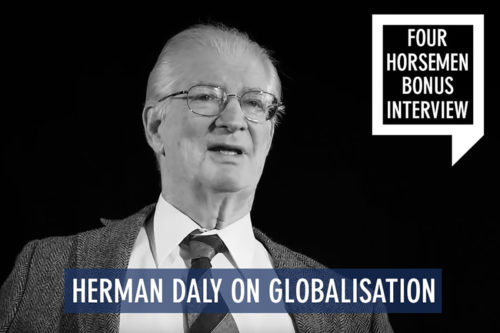 Trapped in this globalised world governance was left in a reactionary international outlook with conflicting priorities and commitments, the degradation of global security, rebuilding an economy, and maintaining international relations. Suffering was indeed on a global scale, but on the domestic front suffering took many shapes, and a government built for global partnerships was ill equipped to provide the necessary “on the ground” engagement to quell discontent at home.

This is not to say that internationalisation, regulation, and sustainable peace are not all amicable goals. Indeed these are the traditional banners of the left, ones that they have stuck to unforgivingly as their mandate in the post-cold war era. Unfortunately these theoretical frameworks do little to relieve poverty, stem fear, and increase political engagement, and with the left having no real access to power, the social support functions that do withered away with bailout plans.

Even in an internationalist context the failures of domestic governance are clear, international regulations on issues such as carbon control were nothing more than the result of political bickering. Agreements had the sizzle of success but in reality represented nothing close to what “experts” deemed necessary always being too little too late. None possessed the soul of internationalisation often presented as the coming together of humanity. Even the UN, the backbone of the internationalist agenda, has become a running joke built on political exceptionalism as appointments such as Saudi Arabia as head of the human rights council and Israel as the head of the Legal counsel perpetuate political white washing away from any liberal ideals protected and coveted as a “way of life” on the domestic front.

This makes it quite interesting that many commentators today proclaim the fallout of things such as Brexit as a rebellion against experts. For when was it that experts were ever consulted or involved in the decision making process? Indeed it was the politicians themselves who hampered any clearly formulated “expert” opinions in the Brexit campaign; it was politicians who stood in the way of “expert” opinion in the prelude to the invasion of Iraq in 2003 which has now been condemned by the Chilcot report. It was politicians who ignored the blaring sirens rung by “experts” before the economic crash of 2008. It was the bickering of European politicians that has resulted in the mismanagement of an otherwise simplistic case of refugee amnesty, for what “expert” would advocate for legalising human trafficking in a deal with Turkey which is already falling apart?

It’s not the people who have rebelled at experts, the rise of Trump, right wing politics in mainland Europe, and the rejection of the EU are not the people carrying pitchforks against experts, it’s a rebellion against the politicians who have continuously diffused coherent and scientific “expert” advice, and ensured that voters remain uninformed, un-empowered, and poor.

The rise of Trump and the like is not a rejection of liberal ideals and the return of authoritarianism, it is the rejection of poor policy and governance that has failed to connect ideals with immediate domestic gain; it is a rebellion against the body of politics as a whole.

In the context of this “rebellion” many were quick to point a finger at the failures of globalisation as a system that does nothing but reshape otherwise traditional class divisions. This, in part, is true, the economic benefits of globalisation can mostly only be understood in the concepts of macroeconomic indicators. An increase in GDP means a greater deal of wealth within the country, this is accompanied by a trade of at the expense of traditional manufacturing and other labour intensive jobs, one that many nations would willingly make, especially with today’s advances in technology. And this decision would be a sound one to make, unless your modes of governance were geared towards austerity, which they are, in which case the economic arguments for globalisation do fall flat.

GDP growth is nothing without the social systems that provide an equitable distribution of wealth and the investment in new sources of job creation or productivity in fields contingent to those that have been impacted by advances in technology.

Otherwise newly generated wealth is benefiting no other than large business interests.

There are also the humanist benefits of globalisation; however with the absence of a just economic system, once again it is only non-labourers who stand the most to gain from a smaller more globalised world. Nothing made this clearer than the arguments of the “Remain” campaign, cheaper travel is what was promised, to which the response was loud and clear, if jobs continue to be off-shored what money are labourers to use to benefit from this smaller world?

But even when scrutinised for the perspective of those of us who have had the chance to benefit from globalisation and internationalisation alike, that is well educated middle-class individuals who have had the benefit of attending prestigious universities with liberal curricula. Those of us who have been exposed to humanitarian ideals and yell foul against discrimination and racism, what benefits have we gained? Most of our generation have graduated to be met by a reactionary world, faced with opportunities of under-employment or the daunting choice of self-employment, sure we still hold true to our liberal ideals and understand their benefits, but the world is still far from reaping those benefits.

It might be that we understand the potential of these systems that make us such strong advocates of them but what right does that provide us with to stand divided against fellow countrymen and act with crude dismissiveness in the face of a majority with labels of racism or a deficiency of intelligence while understanding nothing of their contextual decision making process? Surely we have misunderstood the very ideals we swear by.

Maladapted economic governance on a domestic level has not only failed at equitable wealth distribution, but it has created two lost generation/classes, a new generation disillusioned by a liberal education ill translated to the “real world”, and those belonging to the non-internationalised class feeling disowned by a government touting globalisation at the expense of domestic benefit.

The ailments of the world today are an implosion of failed systems created in a vacuum of accountability, the collapse of both global and domestic orders of governance. What seems as a “rapture” for those of us who stand by liberalism is nothing but the beginning of a much needed reformation. And as with every reformation, it will be messy and fraught with trumps, austerity, and misinformation.

It will be impossible to move forward though without the creation of a new left, one that is not built on reactionary and dismissive forces, one that is not built on a self-righteous clout of intellectual exceptionalism. Neither can the new left be built on classical policies pertaining to unionism and protectionism. The new left will need to incorporate accountability to internationalisation, a technological economy with social mobility, and a system of governance relying more heavily on technocratic involvement in decision making. Until then though, the rapture continues, and we will have to be content with fighting an intangible enemy propelled forward by a contextual environment we have never seen before.