‘Know thine enemy’. If gun control has any chance of succeeding, he says it will be because its advocates took the time to understand exactly how their opponents are operating. 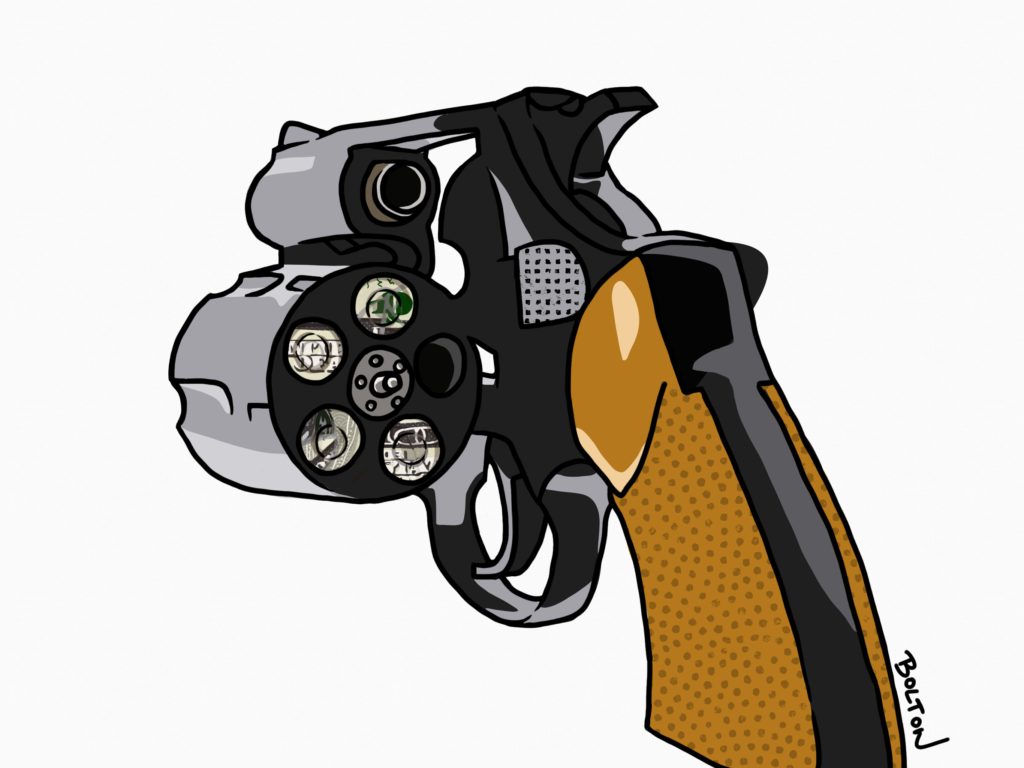 We are fighting for social change through what Dr Mirowski dubs ‘the fog of doubt’, a tried, and tested neoliberal methodology aimed to confuse and disorient the public while implementing a longer-term strategy.

Step one: Denial. Put experts before the cameras to downplay the significance of the event. If it’s climate change, it doesn’t exist. If it’s gun control: claim the statistics are exaggerated, or that student protesters are paid actors.

Step two: Confuse & marketise. This is where the public gets to entertain wild, crazy ideas of how to fix the situation. Think Trump suggesting that arming teachers is a sane remedy to school shootings, (and the Florida House of Representatives actually voting to do just that, within days of the massacre). This is simply buying time to implement a bunch of other policies or financial decisions, throwing a bunch of stuff at the wall so crazy that the ones that stick seem sane by comparison.

Step three: Implement your long-term strategy before anyone even has a chance to get their bearings

“Occupy the entire legitimate space of political discussion so the only thing you can consider are neoliberal projects to fix problems,” says Dr Mirowski.

This has been the operating procedure of the Mont Pelerin Society aided, abetted and funded by neoliberal think-tanks that have spent entire lifetimes injecting their ideology and economic doctrine into governments and Bretton Woods institutions like the IMF and World Bank, accounting firms, multi-nationals, not-for-profits, even school boards and parent-teacher associations.

“The arming teachers thing, that sounds like a think tank response, surely,” says Dr Mirowski. “No way Trump came up with that. He hasn’t come up with any original ideas, not a thing.”

The economic historian says Trump likely got the idea from the kind of three-page position papers politicians regularly rely on when they’re in trouble and they need something to counter with in a jiffy.

“By the way, the main conduit for this just-in-time policy response in the Trump administration is Vice President, Mike Pence,” he says. “Pence is another one of those people who was brought up early through this neoliberal farm team system. He is very beholden to the think tanks. He is like their guy on the inside that can pass these things rapidly in front of Trump. Trump doesn’t read anything; something gets mentioned to him and he just grabs on and runs with it.

“That’s similar to what the left needs. You need stuff ready.”

There is no greater embodiment of this strategy than the revelations over Cambridge Analytica’s psychological warfare tool which harvested the Facebook data of up to 60 million users and used it against them.

“In order to fundamentally change society, you first have to break it,” whistleblower Christopher Wylie recently told The Guardian. “Only when you break it, is when you remould the pieces into your vision of a new society. This was the weapon Steve Bannon wanted to build to fight his culture war”

This is a strategy straight out of the Mont Pelerin handbook.

“In hindsight, why on earth would we have concluded that technology would democratise information?” he said. “It hasn’t before. Why would cheaper and more affordable technology make increased access to communication a virtue?

“The internet is a terrible place to try and fight for gun control, for equitable economic policy. Worse than the television or the front page of the papers. Because on the internet, everything is relative.”

A video recently circulated Facebook featuring a student from Stoneman Douglas eloquently explaining that this movement was based in emotion and passion, and that their fight for gun control will succeed because she and her fellow students have nothing to lose, and the only thing they have to gain is their safety. At least during school hours. Admirable though it may be, the economic historian describes this strategy as deeply naive.

And while the news media might have made heroes out of the new leaders of the gun control movement like Emily Gonzales and Sarah Chadwick, Dr Mirowski says this is an obfuscation in and of itself, “because the layers of defence are boring to cover”.

“You need to spell out, wait a minute, there are many ways to stop this movement,” he says. “And a lot of the ways to stop the mobilisations look like they would help the movement,  that’s the trick.”

“In the same way I talk about permit trading for carbon permits in my book (Never Let A Serious Crisis Go To Waste), the left actually gets snookered by assuming a price on carbon is the best solution it’s likely to get. They think, ‘well, at least we’ll be doing something about global warming’, but in fact carbon permits don’t do anything to reduce carbon emissions. They just make more markets to fix a problem that was caused by markets in the first place, which of course is loved by the financial sector because it allows them to trade more fake instruments and derivatives of fake instruments, and it’s being proposed by the left. I’ll bet there are similar things with guns too.”

Of course the Stoneman Douglas students have probably never even heard of the Mont Pelerin Society. This kind of serious scholarship of the history of markets and of economic thought is what is missing on the left. How can you possibly expect to defeat an enemy if you don’t understand how they operate?

“Ideally those Stoneman Douglas students should have had some kind of think tank to go to, that would begin to prepare them for the challenges they are likely to face,” says Dr Mirowski.

“Not to brainwash them but prepare them and to say ‘look you, there is a very good chance this will get blocked, so what’s your plan B?’, just arming them with information. But to have them go into the fray, cold, green, and in the company of their parents, it’s just not a win-win situation. The change of the magnitude they require is just not going to happen that way.”

Without serious scholarship, organisation, and beneficiaries with bottomless bank-accounts, it is likely that the movement started at Stoneman Douglas will remain unfulfilled.

If the fight for gun control is to have any hope of posing a fighting challenge (along with political and economic reform), the left needs allies with deep pockets. And the movement needs to operate with the same kind of consensus, scholarship, coordination, organisation and efficiency as the ones that have been shaping the economy for the better part of a century.