It was a beautiful, massive, tremendous, success.

Held at rapt attention, onlookers leapt to their knees in synchronicity no fewer than 75 times. Such was the exceptional rhetorical talent of the very stable genius who stood before them.

Once a year, the world’s greatest collection of smarmy sycophants and loathsome hypocrites gather together under one roof. Their purpose: To hear a litany of so-called national successes achieved in the year gone by. This, invariably, is followed by an overly ambitious to-do list for the year ahead.

Some attendees smile and nod happily throughout this grand spectacle of political theatre. Others, knowing they too will be caught on camera, feign very serious and pained expressions to please their constituents. In reality, both factions are serving the same gods: Their corporate donors and the unopposable military-industrial complex at whose feet they must always bow.

Similar scenes in oppressive regimes around the world elicit snorts of disdain from the very crew taking part in this pathetic charade.

Unsurprisingly, the speech was low on substance. It was fluffed up with more than one too many ‘thank yous’ and calls from Trump to acknowledge non-political members of the audience for heroic acts of bravery or sacrifice. That is all well and good, but to say that this portion of the night’s proceedings was overdone would be an understatement.

Trump’s speech read like a checklist of buzzwords designed purely to encourage rapturous hand-clapping from the cult of personality and fake-opposition enablers who sat before him.

Predictably it was weapons, war and terrorism that evoked the loudest expressions of political unity. If the lies of American war propaganda were not so completely ingrained into American minds, events like these would be seen for what they really are: A room full of rich lunatics cheering about torture, war and the general destruction of the planet.

Indeed, Trump promised to keep America’s illegal offshore torture prison camp, Guantanamo Bay, up and running. Now he can continue to indefinitely jail more men who have never been convicted of anything and lock up all the “bad dudes” he wants. This promise, of course, was met with enthusiastic cheers and an audible shout of “Yeah!” from one of the more sociopathically minded in attendance.

We can learn as much from what was absent from the speech as we can from what was in it — and there was not a single mention of climate change or the environment. In fact, Trump’s administration has made a point of doing away with crucial environmental regulations. Most recently in the firing line are America’s endangered species. Trump plans to remove protections for wildlife to make it easier for oil and gas companies to drill on public lands. Of course, this lack of caring for the planet should come as no surprise. Remember, Trump’s adult sons, Beavis and Butthead — sorry, Eric and Don Junior, get their kicks from killing wild animals for fun.

In one of his odder remarks of the night, Trump claimed his administration had ended the war on “beautiful clean coal”. Strangely, Trump added the word “beautiful” in himself on a whim. It was not in the prepared remarks distributed beforehand to the press. Anyway, given that Barack Obama’s administration “worked aggressively” to promote “clean coal” plants, it’s unclear what “war” Trump thinks he won here. Also, there really is no such thing as “clean” coal.

Trump’s first State of the Union was an impressive collection of lies and shameless tales of American transgressions against humanity.

Miraculously though, he managed to get from start to finish without uttering the words “fake news” even once. A tremendous achievement, indeed. 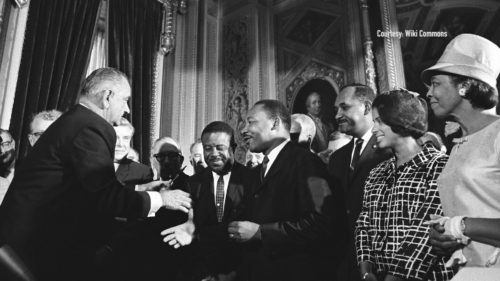