The Memo(s) won’t change anything…

In reality, ‘the memo’ which contains accusations of bias against Donald Trump within the FBI and released by House intelligence committee chairman, Devin Nunes, hasn’t really changed much at all. It’s not the smoking gun Trump was hoping for — and it’s not the disaster the Democrats worried it might be. While Trump feels “completely and totally vindicated” by the memo’s contents, Democrats have dismissed it as a biased document designed by the Republicans to mislead people and paint Trump as a victim.

The memo focuses on a 2016 FBI surveillance warrant to monitor former Trump foreign policy advisor Carter Page. It alleges that the FBI relied on information contained in the infamous ‘Steele dossier’ to obtain the warrant. The problem with that is that the Steele dossier was paid for partly by the Democrats — and the FBI withheld that information when applying for the FISA warrant. Not to mention, according to the memo, the dossier’s author Christopher Steele made it clear he was “desperate” to stop Trump from being elected, throwing further doubt over his intelligence gathering activities.

But let’s try a thought experiment. Regardless of whether a ‘deep state’ conspiracy against Trump exists, just imagine if the tables were turned. Picture the scene if the FBI had obtained a warrant to spy on one of Hillary Clinton’s advisors using information compiled and paid for partly by Trump’s campaign and its associates, Democrats would be outraged.

One thing is clear: Relying on partisan ‘analysis’ about what the memo does or does not mean is a bad idea. As an editorial in the Weekly Standard put it, even before its full release, the commentary on the Nunes memo was comparable to everyone trying to “describe in detail a 5,000-piece jigsaw puzzle after looking at a couple dozen of its pieces”.

Nearly a week on from the memo’s release and really nothing has changed. No one on either side has used this as an opportunity to reconsider their biases or seen it as a moment for retrospection. The very idea is laughable.

The memo has simply solidified partisan arguments on both sides.

Prior to the memo’s release, Democrats complained that publicizing its contents would threaten national security. New Jersey Senator Cory Booker went so far as to suggest that its release could be “treasonous” – a word that has seemingly lost all meaning since Trump took office. As soon as the memo was released, however, the Democrats moved swiftly on from that obvious lie, shifted into high gear to dismiss the newly public information as unreliable — and quickly began efforts to release their own rebuttal memo.

Trump will decide on Friday whether to declassify the Democrats’ memo or to keep it from the public, which of course means ‘Memogate’ will trudge on with its breathless and hysterical punditry and no end in sight.

Partisan hacks on both sides know this is all a charade. They are preparing themselves for the ultimate public battle. When special counsel Robert Mueller’s investigation into alleged Trump-Russia collusion ends, both sides must be primed to either endorse or dismiss its findings and conclusions. Memogate is just a practice run. 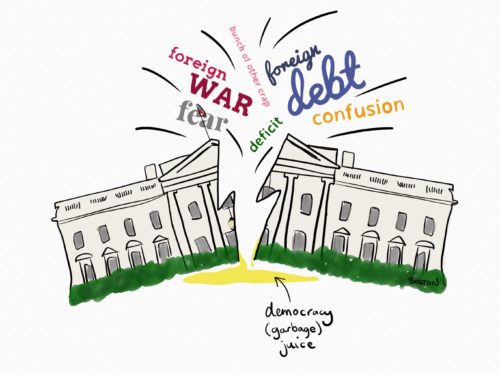 Government vs The People