As it becomes increasingly clear that the alleged chemical attack in the Syrian city of Douma was staged and that no chemical weapons were likely to have been used at the location, it is worth reminding readers of some of the motivating factors that underpinned the incident.

In light of the recent revelation that a mainstream German TV news journalist cast doubt on the official narrative, some obvious questions remain unanswered by the ‘armchair generals’ itching for war.

Why would Assad attack his own people from a winning position and thus provide the West with a justified reason to respond with overarching firepower? Second, why was the West in a hurry to bomb the alleged site before the OPCW team had an opportunity to investigate?

Third, now that the location of the alleged incident has been cleansed of Jihadist terrorists and is safe to travel to, why aren’t the Wahhabist apologists in the corporate media, who presumably are eager to substantiate their claims, grabbing their visas and passports and flying out to Damascus at the earliest opportunity?

The first thing investigators of a crime do in this kind of scenario, is evaluate who is likely to benefit the most from the crime? In this case, it’s the promoters of destruction in Syria who benefit because a pretext for the US-led alliance to bomb is created. 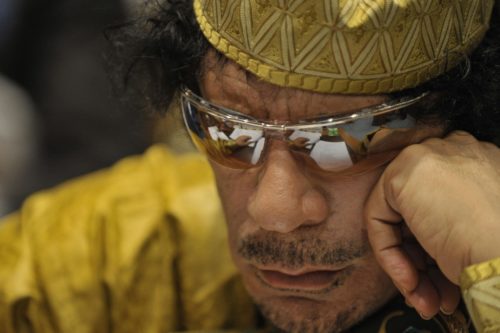 ‘After Me, the Jihad’: Gaddafi tried to warn the west, but nobody listened

The award-winning journalist, Robert Fisk, who was in Douma at the time of the alleged incident, was doubtful that any attack took place. This has been supported by the testimonies of alleged ‘victims’ themselves. Corporate mainstream journalists who have smeared skeptics like Mail on Sunday columnist, Peter Hitchens among others as ‘conspiracy theorists’ for raising rational-based objections against the notion that Assad was responsible, seem unaware it’s actually their illogical stances that are more closely aligned to conspiracy theories.

They also appear dismissive of the evidence which points to similar false flag attacks undertaken in the relatively recent past such as the invented claim Iraqi soldiers removed babies from incubators leaving them to die on the floor, and the fake news story that Libyan government troops powered by Viagra, went on a rape spree.

What is reprehensible is not only that the corporate media and the mainstream commentariat refuse to acknowledge these incriminating assertions, but that they are seemingly ignorant of the historical role the West has played in helping to foment regional instability and conflict, largely as a result of their collusion with regional ally, Saudi Arabia and the terrorist Wahhabist factions whose succession of proxy wars they continue to fund.

Named after 18th-century preacher and activist, Muhammad ibn Abd al-Wahhab, Wahhabism is a fundamentalist, sectarian and puritanical Islamist ideology. After forming a pact with local leader, Muhammad bin Saud, the propagation and protection of the movement through the utilization of the political realm was established and the House of Saud formed. This politico-religious alliance the House of Saud had garnered with the Wahhabi sect, continued over the next 150 years culminating in 1932, with the establishment of the Kingdom of Saudi Arabia. Following an explosive period of growth in the 1970s, the Wahhabist movement, mainly as a result of the influence of the power of money, began increasingly to exert worldwide influence.

More recently, it has used investments in an attempt to replace its far more ideologically tolerant Sunni Islam cousin. While Wahhabism is “a source of global terrorism”, it has also spawned the ideology of ISIS who justify the killing of Wahhabi non-believers. In a recent interview with the Washington Post, the Kingdom’s current Crown Prince, Mohammed bin Salman, conceded that Wahhabist ideology has colluded with the U.S and its allies in their attempts to establish a joint geo-strategic foot-hold in Syria.

But the history of Islamist’s colluding with the West in relation to Syria goes way back before then. As early as 1834, David Urquhart, First Secretary at the British Embassy in Constantinople organised a committee of mujahideen to run guns to jihadists. This continued through to the late 1940s in response to the Baath Parties support of Nasser’s anti-imperial policies and its close ties to Moscow. By 1956, Britain began promoting the idea that the Syrian people needed to be saved from the egalitarianism of the Syrian state.

Working in conjunction with the U.S, the British agreed that a serious attempt should be made to establish a pro-Western government in Syria by means of an engineered coup that enlisted the use of Turkish, Iraqi and Lebanese forces as well as the Muslim Brotherhood. In December 1954, the British ambassador in Damascus, Sir John Gardener, told Anthony Eden, then foreign secretary, of “monster demonstrations arranged by the Muslim Brotherhood in Syria”, which took place after Egypt’s clampdown against the movement.

However, this strategy proved counterproductive. The coup, known as Operation Straggle, ultimately failed. It was replaced in September 1957, by another plan. Backed at the highest level in Britain, this strategy principally involved the provoking of an internal uprising by the Muslim Brotherhood in Damascus as a prelude to the Syrian government’s overthrow.

Carried out in coordination with the Iraqi, Jordanian and Lebanese intelligence services, historian Mark Curtis notes that the ‘Preferred Plan’ involved further divide and conquer and false flag tactics, the use of Syrian MI6 agents working inside the Baath Party and the CIA to augment tensions in Jordan, Iraq and Lebanon. Syria had to be made to appear as the sponsor of plots, sabotage and violence directed against neighbouring governments.

The Anglo–American plan also involved Prime Minister Harold Macmillan authorising the assassination of key Syrian officials. The head of Syrian military intelligence, the chief of the Syrian general staff and the leader of the Syrian Communist Party, were all approved as targets. Yet in the end, the 1957 plan never went ahead, mainly because Syria’s Arab neighbours could not be persuaded to take action.

More recently, as documented by investigative journalist, John Pilger, the West colluded with Riyadh during the Cold War in their attempt to remove from Afghanistan the Soviet-supported secular and progressive People’s Democratic Party of Afghanistan (PDPA). Emerging as a liberation movement in the 1960s, the PDPA overthrew the autocratic regime of Mohammad Daud in a popular revolution in 1978. The new government outlined a programme of reforms that included the abolition of feudal power, freedom of religion, equal rights for women, free medical care to the poorest and the introduction of a mass literacy campaign. By the late 1980s, half the university students were women, and women made up 40% of Afghanistan’s doctors, 70% of its teachers and 30% of its civil servants. Girls could wear what they liked and go where they wanted.

The threat of a good example

On 3 July 1979, President Jimmy Carter authorized a $500 million covert action programme in support of what was to be known as the Taliban (“students” in Pashto),  who during the 1980s were taught in the Saudi-backed Wahhabi madrassas, religious schools known for teaching a fundamentalist interpretation of Islam.

In August 1979, the U.S embassy in Kabul reported that “the United States’ larger interests….would be served by the demise of [PDPA government], despite whatever setbacks this might mean for future social and economic reforms in Afghanistan.” When in his Washington Post interview above, bin Salman alluded to the Wests collusion with Wahhabism during the Cold War, it was America’s Faustian pact with some of the most brutal fanatics on earth like Gulbuddin Hekmatyar in Afghanistan that he was referring to.

According to David Holmes and Norm Dixon, Hekmatyar’s specialism was opium trafficking and throwing acid in the faces of women who refused to wear the veil. Just as Western governments have donated at least $100m to Wahhabist ‘humanitarians’ the White Helmets, founded and trained by British mercenary, James Le Mesurier, Washington had donated $4 billion into the mujaheddin factions and Hekmatyar was praised by Prime Minister Margaret Thatcher as a ‘freedom fighter’.

Holmes and Dixon point out that the plan of Carter’s National Security Adviser, Zbigniew Brzezinski was to promote an international movement that would spread Wahhabism in Central Asia and ‘destabilize’ the Soviet Union. What was euphemistically called Operation Cyclone, amounted to the CIA’s backing of a plan put forward by Pakistan’s intelligence agency, the ISI, to recruit people from around the world to join the Afghan jihad?

The greatest trick the devil ever pulled was convincing the world he did not exist.

By colluding with Wahhabism, under the foreign policy pretext of ‘the enemy of my enemy is my friend’, Washington and its allies dangerous game-playing was to reach its apex in Iraq. During the first Gulf war, half a million Iraqi children had died mostly as the result of a Western imposed blockade of the country.

This scandal was to be subsequently exploited by Osama bin Laden as a means of furthering his own warped propaganda. Unknown to the American public, the U.S establishment which formed a close relationship with bin Laden during the war against the Soviets in Afghanistan and whose former president, George Bush senior, continued to work as a consultant to the bin Laden family, had been warned that the U.S client state, Saudi Arabia, which had spawned al-Qaeda, was planning attacks on New York and Washington.

Meanwhile, during the current conflict in Syria, U.S Senator, John McCain has been regularly photographed alongside Islamist terrorist-affiliated groups and BBC journalists have embedded themselves with similar groupings. In addition, the British Foreign Commonwealth Office recently promoted World Hijab Day, and links appeared to have been established between the British government, the Manchester bomber and Wahhabists in Libya.

Dr Marcus Papadopoulos asked the reasonable question why it is the military – in another of the Wests key Middle East partner states, Israel – doesn’t target ISIS and their affiliates? Why the latter have never attacked the former and why the Jewish state treat injuries sustained by Islamist terrorist fighters whose ideology is incubated in Saudi Arabia?

It is also worth noting that the country that spends billions in exporting its violent and regressive Wahhabist ideology to a country like Britain, also trades in weapons of mass destruction with its key Western ally.

Many of these bombs rain down on the people of Yemen. Terrorist ‘blow-back’ on the streets of major Western cities appears to be a price the governments in Washington and London are willing to pay in order to maintain their close ties with the Saudi regime and the terrorists it spawns. By so doing, the establishment is playing with fire.