Poking fun at North Korea’s Kim Jong-un has become a global past-time, but while people often deride him as crazy, the North Korean leader’s actions are part of a highly rational long-game. Former Australian Army Officer and defence specialist, Matt Jones says Kim Jong-Un is a skilled operator who will stop at nothing to reunify the Korean peninsula on his own terms. In many respects, watching an assembly of South Korean citizens in Busan celebrate Liberation Day recently on 15 August was a bittersweet experience. It is the day that marks the end of Japanese colonial rule, but also the beginning of a divided peninsula.

The Soviet Union and the United States agreed upon division of the peninsula prior to the surrender of Japan in 1945. Two American officers, essentially armed with a chinagraph pencil and map, determined that the 38th parallel was a suitable halfway line to delineate the two new regions. No consultation was made with any Koreans. The United Nations was not yet in existence, and the crudeness of these measures continue to have ramifications even today. Initially, the division was temporary pending a resolution at a later stage, a hope which faded as Cold War tensions grew.

A very bloody war fought between 1950 to 1953 defines the relationship that exists today between the two countries on the Korean peninsula. Liberation Day celebrations perhaps show the immediate problem of resolving conflict on the peninsula through the symbolism of two flags. Each country claims legitimacy for authority over the entire peninsula, and were there to be unification neither country will be the first to surrender up their flag.

The litany of hostile acts by North Korea towards South Korea since the end of the Korean War is extensive. While the circumstances in Malaysia of February 2017 resulting in Kim Jong-nam’s death, the brother of Kim Jong-un, remain unclear and shrouded in mystery, the conclusion from Korea’s National Intelligence Service indicates that it might have been a State sponsored assassination or public execution. That attack shows the credibility and level of sophistication by a country where past mass starvation from the effects of drought is known to exist hand-in-hand alongside atrocious human rights abuses as reported by Australia’s Justice Kirby in 2014. In 1968, North Korean commandos launched a brazen raid in Seoul with the objective of assassinating the South Korean president in his residence. A subsequent assassination attempt was made against the South Korean president in Rangoon in 1983.

In 2010, the frigate Cheonan was sunk by a torpedo. Overwhelming evidence points to North Korea as being responsible for the hostile action, which it has denied. The sinking occurred close to the Northern Limit Line which is a disputed boundary of territory between the two Koreas, the result of inconclusive agreements to establish a boundary between the two countries at the signing of the armistice in 1953. The armistice brought hostilities of the Korean War to a temporarily end. There is no peace treaty signed between North Korea and South Korea, and the armistice itself has been the point of considerable disagreement since 1953. Later in 2010, an artillery exchange between North Korea and South Korea left two South Korean soldiers dead with more wounded. The stakes are high.

People often deride Kim Jong-un as crazy, but this is not the case. Examining his actions, he is highly rational and a skilled operator in pursuing his national objectives.

North Korea’s intention is to stop at nothing less than the reunification of the Korean peninsula on their terms, and is playing a very long game. Part of their strategy is to isolate South Korea from negotiations with the United States, and agree to dialogue pending the withdrawal of American forces from the Korean peninsula.

North Korea’s guiding ideology is that of Juche, which is defined as national self-reliance. The irony that North Korea is propped up by Chinese backing is obvious, noting that the support it receives from China provides the means for them to continue a belligerent narrative with the rest of the world. The playbook of North Korea is based on brinkmanship. North Korea uses the sanctions, threats and harsh words aimed against it as an excuse justify progress of its nuclear missile program and raise the stakes higher. Development of a nuclear arsenal is clever within that context, even if diabolical. Pursuing denuclearisation on the peninsula with the agreement of North Korea seems near impossible at this point in time.

Earlier this month, President Trump raised the stakes higher fuelling tensions on the peninsula by saying hostile action from North Korea “will be met with fire and fury like the world has never seen”. It would seem that Trump’s language was designed to match the belligerent rhetoric of Pyongyang which has in the past promised to engulf Seoul into a “sea of fire.”

Is this the beginning of the end? And does this mean that a full scale nuclear war is about to break out on the Korean Peninsula? If you were to read most Western media outlets, you would be forgiven for believing there was a high likelihood, even an inevitability, to that endgame. In Seoul, there is concern, but life continues as normal. Televisions in public places show news about the ongoing machinations involving North Korea, echoed by the headlines on the newsstands. Even so, no foreigners have been evacuated, no drills are practiced to ensure people know where the nearest nuclear fallout shelter is located, and no civil resilience plan is articulated for protection from a hellish artillery barrage.

What is more likely occurring between the words of Trump and Pyongyang is the proxy war of sophisticated information operations, a characteristic feature of political discourse on the Korean peninsula. It is part of a deadly game of brinkmanship where North Korea has long showed itself as expert.

The propaganda contained in these words is as much for domestic consumption in the United States as it is for a global audience. Laced into Trumps words this month were barbed comments about the inaction and ineffectiveness of previous administrations. Much consternation remains as to the efficacy of the Agreed Framework established by President Clinton and any actual progress made by former President Carter travelling as a peace envoy to Pyongyang. Even now, Trump’s administration is divided on how to manage North Korea.

Whether dialogue with North Korea has actually achieved anything of value is doubtful. The Six Party Talks that were established following the collapse of the Agreed Framework have proved of little benefit, and remain in hiatus since North Korea’s withdrawal in 2009. Brinkmanship has taken centre stage in framing both action and dialogue. Here’s the rub: if dialogue doesn’t work, what then lies beyond brinkmanship? Further to that, will Trump’s raising of the stakes with military threat create the preconditions for negotiations or further incense the situation?

Some commentators have argued that recognising the sovereignty of the North Korean state by sending diplomats to Pyongyang from Seoul would be the best approach for a peaceful resolution. While this sounds credible on paper, it is likely an entirely fruitless idealistic gesture that would be used by Pyongyang to buy time as it strengthens its position. Trust is in short supply, and becomes its own conundrum. Without trust, there can be no dialogue.

Trump’s hardline stance to apply pressure on North Korean brinkmanship is not without trickle-down effecting relationships across north east Asia. Japan, once the colonial master of the peninsula, now is softened by an anti-war constitution. In that light, the game of brinkmanship places pressure on Mr Abe, Japan’s Prime Minister who has advocated for policy reform in interpretation of what defence measures might be permissible for Japan under her constitution. The hawkish posturing by Abe does not sit well with all of the nation. In balancing the strong relationship struck with Trump, Abe needs to consider the contested leadership challenge he faces next year from a former Japanese foreign minister who takes a more cautious approach in how the Japanese Self-Defense Force ought to be transformed. North Korea is masterful in directing threats against Japan, and at the same time creating dilemma within their domestic politics, as much as this is the case for Trump.

The case for unification on the Korean peninsula under South Korean leadership is tacitly resisted by China. China is able to use their influence over North Korea to wedge Western interests, and to become indispensable in shaping global affairs. Many regard this as part of a Chinese strategy to undermine and erode America leadership. China continues to speak disapprovingly to North Korea about the development of a nuclear program, and at the same time remains largely passive in terms of their response to escalating brinkmanship, in the hope that American legitimacy will be tested and falter because of domestic pressure and North Korean steely resolve.

Similarly, Russia has spoken disapprovingly about Trump’s brinkmanship which appears to sail the peninsula into uncharted waters. Russian Foreign Minister Sergey Lavrov sought to claim moral authority by suggesting that the first to de-escalate tension between the United States and North Korea would be the wiser and stronger world leader. Again, Russia’s interests are not immediately served by unification under South Korean leadership as they seek any opportunity to undermine America on the world stage.

The threat is real, and so are the weapons. Perhaps brinkmanship is its own saving grace while the world searches for an elusive peace on the Korean peninsula. The recent delayed test firing of weapons by North Korea scheduled to be targeted in the vicinity of Guam is a positive sign that this calculated game of brinkmanship has a long way to play out in the acrimonious dialogue where words, not bullets, are the calibre of ammunition exchanged. The alternative of pursuing a course of military action is more than likely an unknown catalyst for a troublesome peninsula, and potentially a harbinger of global conflict. 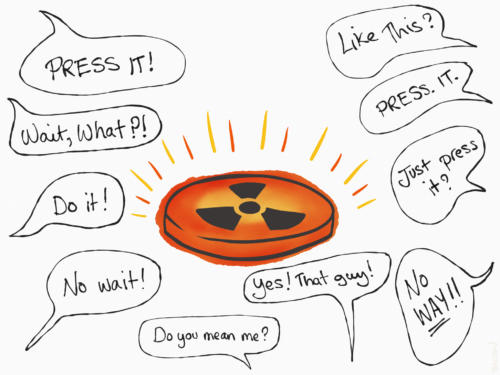