Contrary to popular opinion, Venezuela is not ‘flirting with dictatorship’. In reality, these claims couldn’t be further from the truth. But majority support for a Constituents Assembly, and the fact that the Governing United Socialist Party won 17 out of 23 governor races is irrelevant to Washington’s nefarious objectives. US Secretary of State, Rex Tillerson is threatening to remove Venezuelan President Nicolas Maduro is he doesn’t leave of his own accord.” The country is being “softened up” through the press as a precursor to its subsequent destruction. 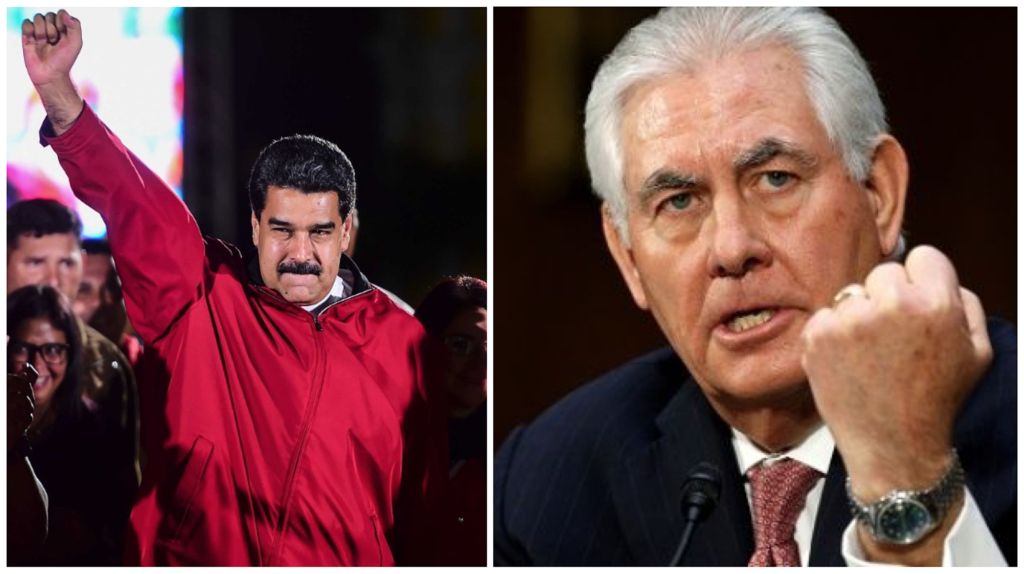 In April, 2002, the New York Times described the illegal military intervention that temporarily overthrew the democratically-elected Venezuelan president, Hugo Chavez, as “a positive step away from dictatorship towards democracy.”

This kind of Orwellian reversal of reality was part of a broader media strategy to undermine democratic populism symbolised by the establishment of Chavez’s Bolivarian revolution in 1999 and to crush any resistance towards regional self-determination.

The attempt to overthrow Chavez was justified on the spurious claim that the former president came to power as a result of an illegal coup and therefore he had no democratic legitimacy. The reality, however, is that Chavez was democratically elected in 1998, taking 56 per cent of the vote.

According to the December 7, 1998, Post-Election Statement on Venezuela, the Carter Centre – a human rights organisation which monitored the election – described the process as “transparent and peaceful that clearly reflected the will of the Venezuelan people”. Chavez was re-elected in 2000 with an increased share of the vote (60 per cent) and won again by a similar majority in 2006. He won a fourth term in the October 2012 election, five months before his death in Caracas on 5 March, 2013.

The politics of Chavez were founded on two very simple tenets:

1) People ought not to be starving in dreadful slums in the world’s most oil rich state.
2) The CIA ought not to control Venezuela.

President Nicolas Maduro who succeeded Chavez and who intends to continue the revolutionary path mapped out by Chavez, is facing a similar media onslaught:

“Venezuela Leaps Towards Dictatorship” said The Economist. “Venezuela Flirts With Outright Dictatorship”, exclaimed The Independent. The New York Times headlined with “Venezuela’s Descent Into Dictatorship”, while The Guardian’s “Let’s Call Venezuela What it is under Maduro: a Dictatorship”, was even more forthright in its message. To top it all, Newsweek went for the double whammy, “Putin Steps In To Bolster Venezuelan Dictator, Maduro.”

We have been here before. In May, 2006, The Independent stoked up fear of the rise in grass roots democracy throughout Latin America with their headline: “The Big Question: Should we be worried by the rise of the populist left in South America?”

Rather than emphasising the widespread growth in bottom-up democracy throughout the region as a positive development, the paper instead implied that this popular movement of the left represented a threat to democracy. The unspoken assumption is that Washington has a right to intervene in a country like Venezuela to curtail these “threats”.
Meanwhile, opposition forces who are tearing the country apart, are depicted as true democrats fighting an illegitimate fascist government. Since Maduro’s Constituent Assembly election victory, this inverse of reality has been peddled as a stated fact almost daily in the corporate media.

“Readers will not also know that the convening of a Constitutional Assembly is provided for under Venezuela’s 1999 constitution which was ratified in a referendum.

The indirect constitutional arguments for a final referendum, for obvious reasons, are much stronger, but Maduro has committed to one.

Also, the opposition did not just boycott the vote: its supporters perpetrated lethal acts of violence to prevent people from voting.”

The Constituent Assembly process initiated by Maduro has mass popular support among Venezuelans. Sixty-five per cent agree that elections should take place in 2018, and a majority think the reforms leading up to the elections will defend the social gains of recent years. These gains include the growth in social programmes known as “Missions” which cover everything from infrastructure investment and affordable housing, through to free education, healthcare and cultural and art projects for the poorest.

The gains have been phenomenal. Since the Bolivarian revolution was established, poverty has fallen from 43% in 1999 to 26% in 2017 and extreme poverty from 17% to less than 7%. Moreover, children’s attendance at school has increased from six million to 13 million, while college attendance has more than quadrupled. Because of the expanding free universal healthcare in the country, infant mortality dropped by an astonishing 50%.

The constituted assembly under Maduro is about preserving these gains. But rather than viewing this as a positive development, the opposition seem determined to reverse the gains made no matter what. Their method of achieving this is to overthrow the elected government through violent insurrection and thereby assume absolute control of the apparatus of the state.

Since April, organised violent attacks have included the use of explosives directed against the National Guard, and the targeting of constituent assembly members. This violence is consistent with the actions of the US government which, historically, has funnelled money, weapons and US-trained death squads in an attempt to stifle independent nationalism throughout south and central America. John Pilger argued that as part of this process, Venezuela has been “softened up” as a precursor to its subsequent destruction.

With the death of Chavez and the election of Maduro in 2013, the opposition have seized their opportunity to up the ante. This has been bolstered by what US senator Marco Rubio absurdly described as Maduro’s attempt to “permanently change the democratic order”. In reality, the purpose of the newly constituted assembly is to make the democratic gains made by Chavez irreversible.

The end game for the opposition and their allies in Washington, is regime change in Venezuela. Rex Tillerson admitted as much after Wikileaks revealed that the US Secretary of State said:

“Either Maduro decides he doesn’t have a future and wants to leave of his own accord, or we can return the government processes back to their constitution.”

In other words, Tillerson is threatening to remove Maduro if he doesn’t “leave on his own accord.”

With millions of US dollars flowing into the country to fund opposition groups, this is the clearest signal yet that Washington is preparing for an illegal coup to oust another democratic leader of a sovereign state. That the governing United Socialist Party won 17 out of 23 governor races in the regional vote that took place on October 15, 2017 is irrelevant to the Washington-supported opposition and their media mouthpieces. Even though the elections had been validated by international observers, both will continue to misinform the general public in order to satisfy their own nefarious objectives.